I tell you one thing, taking this out of the box for the first time, even when you have had a prototype in your hand months earlier, is a revelation. Now just to clarify, prior to getting the Vita, I owned an original 1003 PSP and a 2003 and one of my sons has a 3003. I have also been very familiar with the N1000 (PSP Go!) and the E1000 (Street PSP), and I owned a DSi XL, 3DS and every Gameboy ever released. From a purely physical form and presence point of view, the PlayStation Vita absolutely annihilates everything that has come before it. The Nintendo’s, Wonderswan, Neo Geo Pockets and even the Game Gear and Lynx look and feel like toys. When the PSP arrived it seemed different, but even the executive toy styling of the PSP Go pales in quality and feel compared with this unit.

Bearing in mind that mine is the ever so slightly heavier 3G version of the Vita, simply picking the machine up, the larger screen makes it significantly bigger than the PSP, and for an adult that’s a massive plus. The machine feels right in your hands and even with my freakishly tiny-for-a-man hands (which is weird as I have big feet, but I digress) reaching all the buttons you need to is no stretch. The mild curve to the back feels natural and looking around the machine as a whole you get the rather upmarket feel of the machine straight away. This is NOT a toy. It feels about as unplasticky as a plastic thing can get.

The edge is trimmed with a gunmetal silver finish, unbroken at the left and right edge. Along the lower edge is the serial number sticker, serial bar code sticker, headset/headphone socket and the multi-connector with which you can either charge the machine or plug it into a USB port on a PC or PS3. Also on the bottom a little further back from the silver trim is the tiny cover for the ridiculously small proprietary memory card.

Along the top of the machine the silver trim recedes form the rear a little in allowance of the should buttons, but is broken up with a panel in the same gunmetal silver trim. This panel includes the silver spun metal effect buttons for power & sleep (to the left), plus the increase and decrease sound volume buttons (to the right). Hold the volume buttons down  together and you can mute the out put. Between the buttons are two cover panels, the left one is marked with the “PSVITA” logo and hides the Vita Card slot for physical games and the other unmarked one covers a mysterious connector which has screw thread holes either side. 4G add-on? Better camera add-on? Video out add-on (one can hope!) Who knows… because Sony haven’t even mentioned the port thus far.

As you can see from any pictures of the Vita it has the same buttons as the PS3 controller (bar the second set of shoulder buttons), albeit arranged slightly differently and smaller, with the PS button now glowing happily at you. The analogue sticks are in fact actual sticks, making them far easier to use than that solitary nub on the PSP. However unlike the PS3 the sticks do not have buttons underneath… and for heaven’s sake don’t press down on them in case you go through the circuit board inside. The buttons all feel firm and responsive, and the front camera site at around 10-11 o’clock up and to the left of the triangle-circle-cross-square button cluster.

The screen is a gorgeous organic light emitting diode (OLED) affair, so its brighter than any screen on the PSP or DS, even the 3DS and yet uses less power. The 16:9 wide screen panel is also a darn sight bigger than the screens on the PSP or XL DS machines. The resolution is lower than originally intended as at one point it was supposed to be at least 720p (1080 X 720 pixels) but is still at a very effective 960 X 544, but with the drop in video RAM from the originally intended 256Mb to 128Mb this is to be expected. But at least the machine isn’t £400 this way. 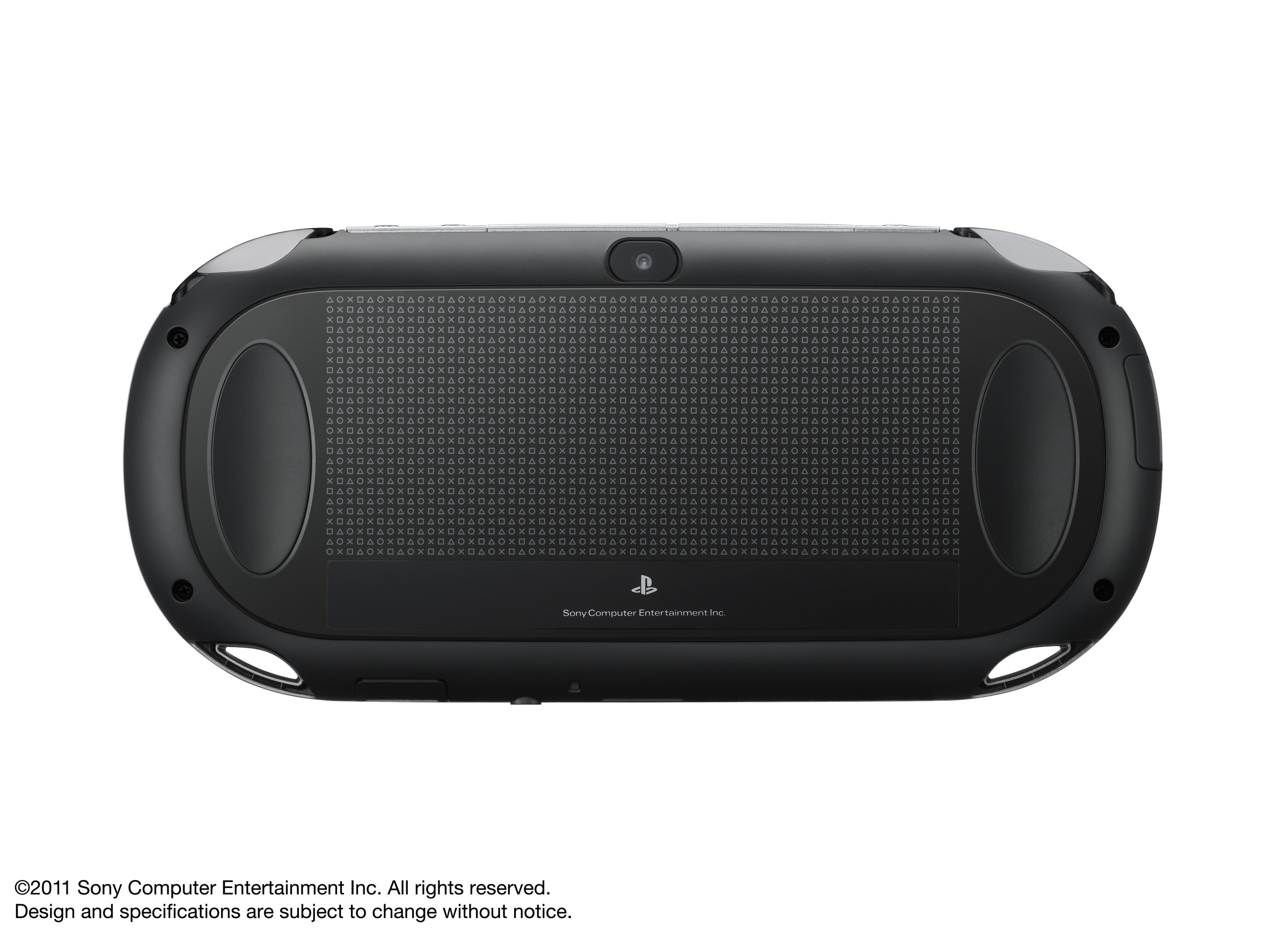 On the back of the machine is the misunderstood rear touch panel which is smaller than the screen on the front but still bigger than a PSP screen. There are two finger friendly indentations in the back either side of the touch panel, while the Sony model information sticker appears below the touch panel. As far as the build quality of the unit is concerned it’s up there with product such as the iPhone/iPad and other higher end tablets, making it predecessor look rather cheap in finish. In fact it’s very easy to see it as a 5 inch tablet with gaming controls built in.

In the box you get a quick start guide, the USB cable with converter to plus it into a power socked to charge the machine up, and a set of augmented reality cards (which were not ready when I got my machine, though this has been sorted!) If you get the 3G version a Vodafone SIM should also be in residence (and for registering with Vodafone and purchasing your first top up you should get a download code for Wipeout 2048, until the offer runs out anyway.)