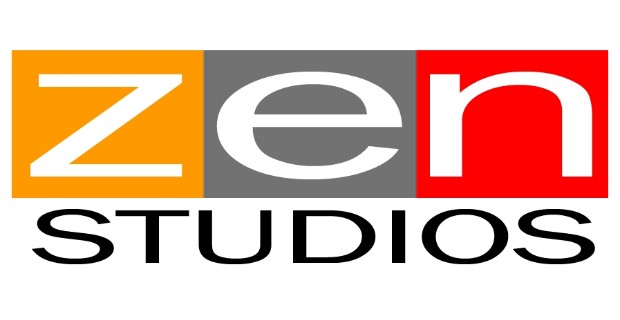 Neil Sorens, the Creative Director at Zen Studios, agreed to take some time out of his busy schedule to give us this interview to talk about Zen Studios and their work, the incredible Zen Pinball 2 and their forthcoming PS Vita game KickBeat…

The PS Vita is fortunate enough to be blessed with a wide range of pinball games available for players including the Minis range and compatible PSP games as well as Zen Pinball 2 and what could be considered to be your closest rival, Pinball Arcade. Do you think that there is enough room in the Vita marketplace for so many pinball games?

Yes, the games offer different styles of pinball.  While Pinball Arcade contains recreations of real tables from years past, Zen Pinball 2 has new designs and themes.  They’re both excellent products that are a good fit with the system’s capabilities.  In fact, a year from now, when people think of the Vita, pinball will be the first thing that comes to mind.  We and our friends at Farsight are taking it over.  You heard it here first.

Where do you get inspiration from for all of the tables featured in the game?

It comes from a lot of places: tables from the past, the themes we’re using, and new ideas from the brains of our designers who eat, sleep, and breathe pinball.  It’s amazing what people’s minds will come up when they’re being beaten, deprived of sleep, and fed experimental drugs.  That’s how we roll in Hungary. 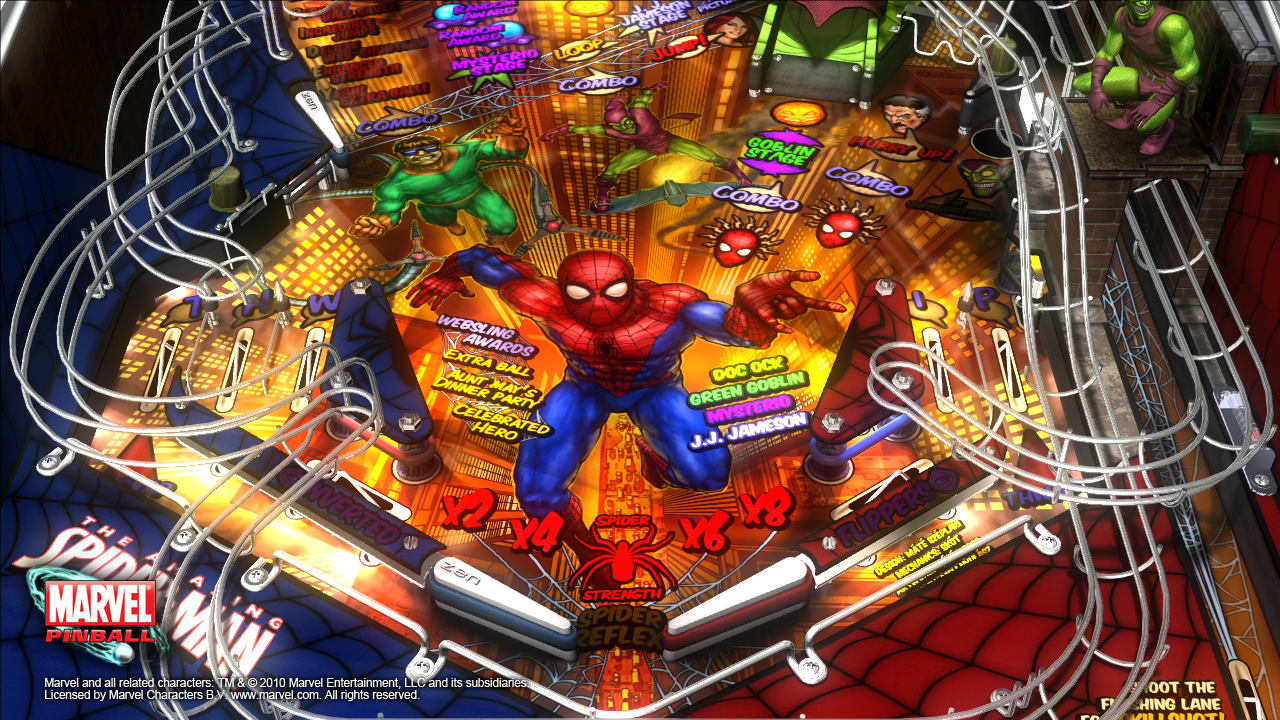 We’ve seen a large range of licensed Marvel tables from you so far as well as the Plants Vs Zombies collaboration with Pop Cap Games. Are we likely to see any future licenses from you?

I’ve been pushing for an Blackadder table – to no effect, sadly – but we have a big announcement coming soon that’s almost as good.  Generally, we like working with other properties and it seems to boost interest in our game, so we’ll continue to mix original tables with licensed ones for the foreseeable future.

Considering the current return to mainstream popularity of the franchise following the recent trilogy of movies, would you consider tables based on Transformers?

Sure! Although I’d personally rather base it on the cartoons I watched as a kid than on the movies.

Would you consider adapting any real pinball tables to Zen Pinball?

We were considering that at one point, but we were prevented from doing so by Farsight’s exclusive license that covered pretty much all the good tables.  So we’re focusing on creating new content, which, although more difficult and time-consuming, is more fun to work on.  Plus, we get fewer complaints about the little letter above the left inlane being slightly the wrong shade of teal or whatever.

What has been the most popular of all of your tables / packs of tables you have released to date?

It varies by platform, but overall I’d say Street Fighter, Sorcerer’s Lair, and Wolverine are all up there in terms of sales and amount of play.  Among our hardcore players, Blade and Fear Itself get a lot of love. 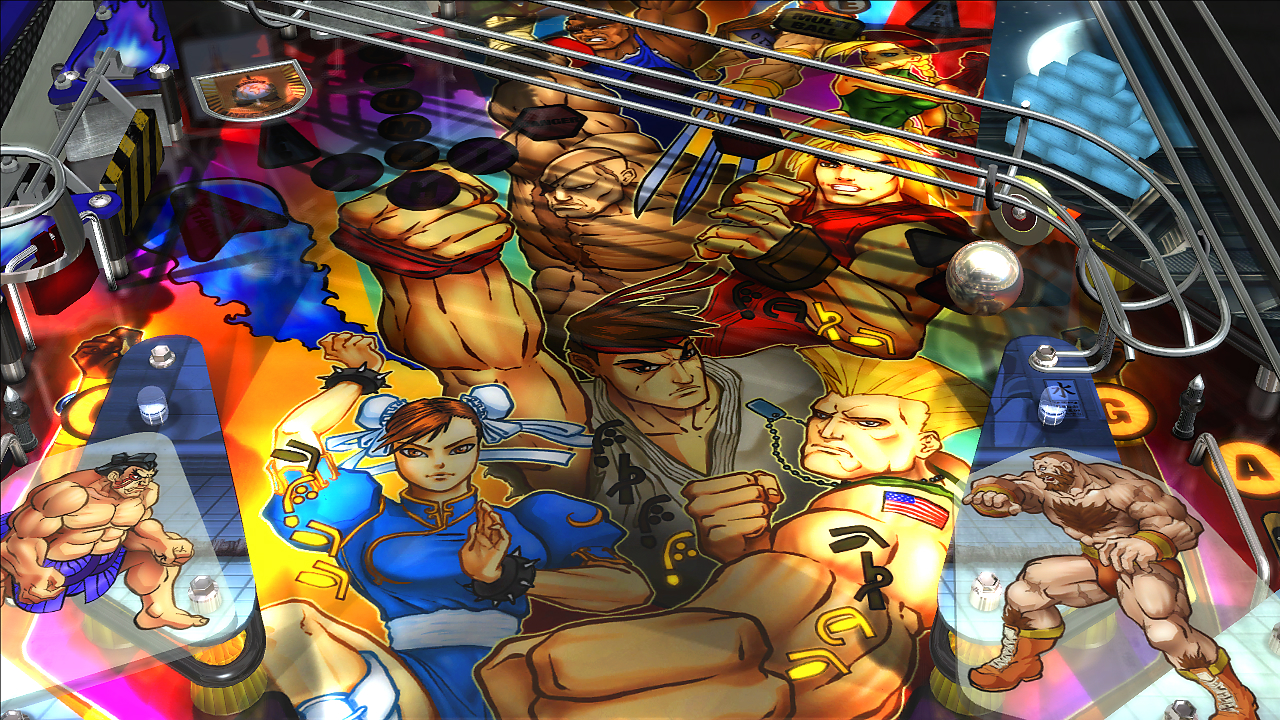 Why do you think this is?

It’s a mix of timing (tables available when a game launches sell best), design quality, and appeal of the central theme.  Also, we brainwash our players with subliminal messages.  Also your readers. 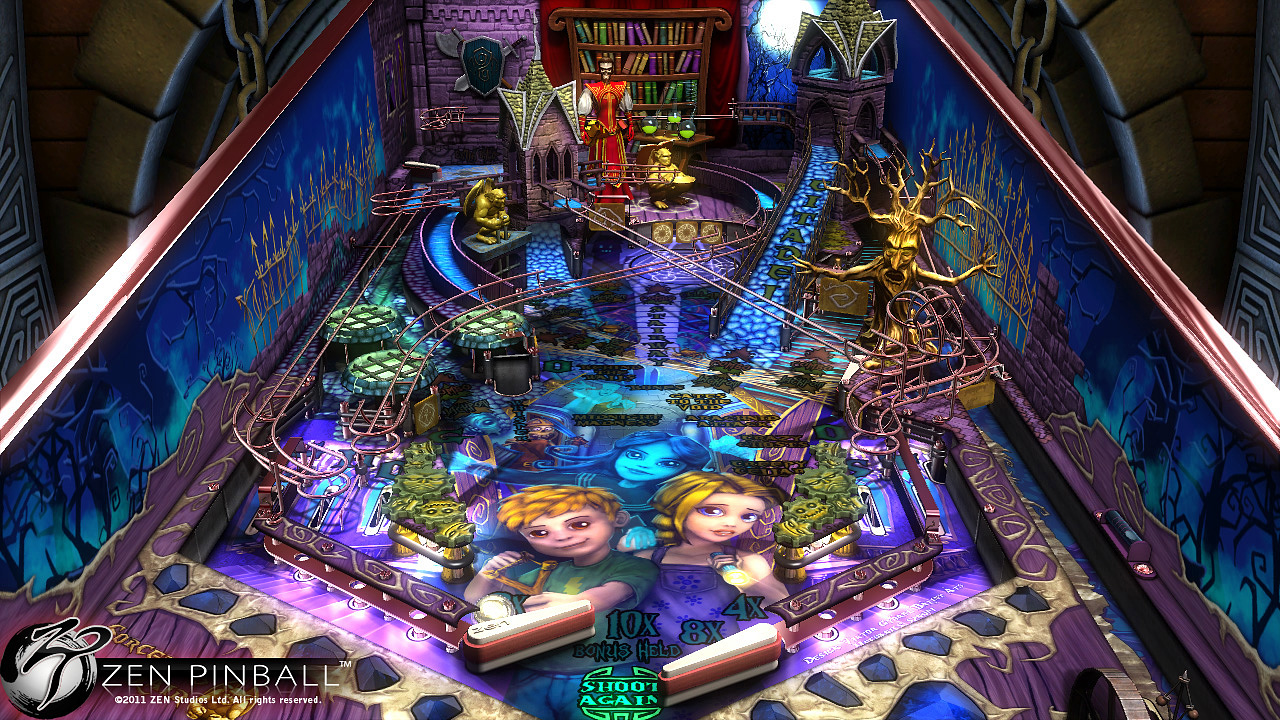 Will we be likely to see any of the remaining 11 tables that you have created that are available for the XBox 360 in Pinball FX2 converted for the PS3 and PS Vita and if so can you give us an idea of what may be coming and when?

It’s unlikely right now.  I’d go as far as to say that the original Pinball FX tables will never come to PSN just because they’re in an old format and would have to be rebuilt almost from scratch.  The four “core” tables from Pinball FX2 were developed under an exclusivity agreement with Microsoft and thus probably won’t make it.

You took the bold move of changing the format of the game for Zen Pinball 2 by releasing the core game free and releasing all of the tables separately with free trials available for all of them. How well has this worked?

It’s worked well.  By lowering the barrier to entry, we get a lot more curious people who try the game, find a theme that they enjoy, and discover that they like pinball.  Some people complain that they thought it was a free game and then are disappointed to discover that all the content is paid.  We’re not trying to trick anyone, but they get that impression anyway.  However, on mobile, we do give away a free table, and a few people complain that there aren’t more free tables.  We could do that, but then we’d have to sell you £4.99 packs of Coins or Gems or whatever if you wanted to flip your flippers more than 50 times in the same day, and that’s just evil. 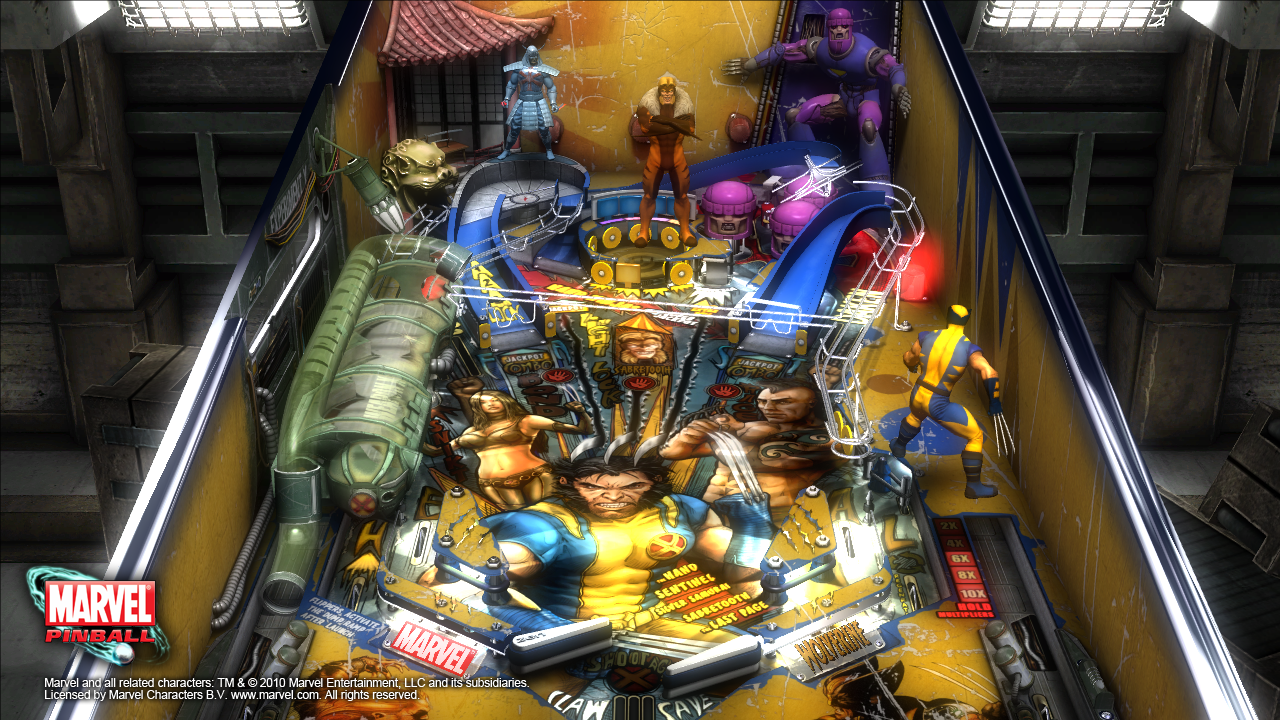 You were one of the early third party adopters of the Cross Buy initiative. Do you think this has had any positive impact on sales?

Definitely.  Cross Buy is a great feature, and every company that has more than 1 platform should adopt it.   Not naming any names.  Ahem.

We avoid making our customers pay more than once for the same content whenever possible, whether it’s through Cross Buy or offering free import from previous games.

While you do offer Cross Buy and Cross Save functions for the PS3 and PS Vita allowing both versions of the game to share Trophy and High Score data, at present there is no option to take part in cross format multiplayer games. Will this be available in future updates?

Not a lot of our players use the online multiplayer mode, so we’ve focused our resources in other areas.  If that changes, we’d certainly take a look at adding it.

While we love the vertical mode for the tables we have found – as with most other pinball games – that touch screen controls aren’t as responsive as button controls. Will this be something that could be included as an option as a secondary control method for people who prefer some form of tactile control?

Yes, we’ve gotten a lot of requests for this, and I’m in total agreement.  Aside from the tactile feedback of buttons, the Vita has such a nice screen – why would you want to cover it with your fingers and get smudge marks on it, just to imitate a buttonless cripple of a device? Anyway, we’ll be adding that sometime in the next 2-3 months.

Moving away from pinball, and your next game for the Vita is KickBeat which is taking the rhythm game in a new direction combining it with the beat-em-up genre. Can you tell us more about it?

KickBeat is a rhythm game with a martial arts theme.  It’s got the standard rhythm game mechanics (press a direction in time with the music), but instead of buttons, bars, arrows, etc. providing the cues, it’s fully 3D, animated enemies attacking you.  Press the right button at the right time, and your character will fight back, turning every song into a big kung fu melee.  We’ve got some fun features like the ability to generate gameplay tracks from your own music. 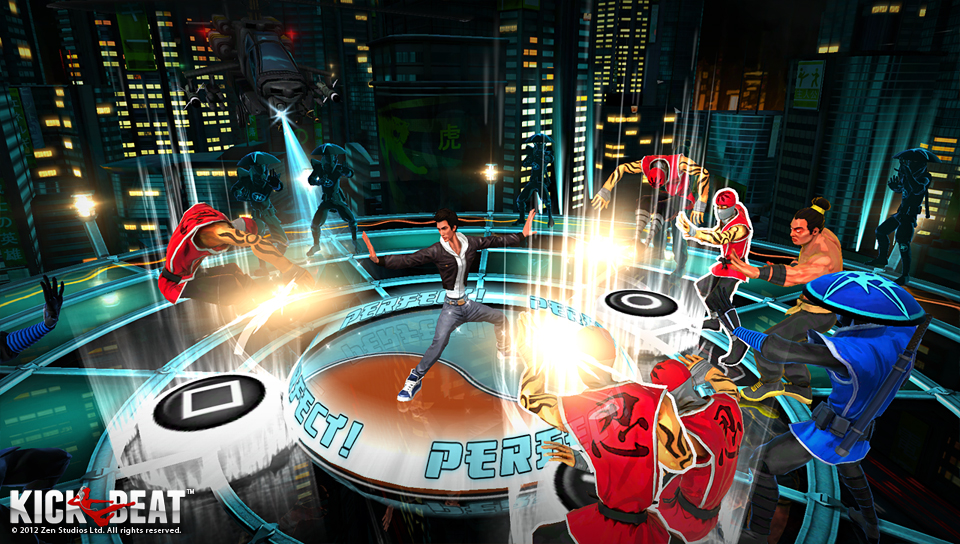 With the demise of the Guitar Hero and Rock Band franchises and very little in the way of new games in the genre since Rocksmith, do you think that there is still a market for games like KickBeat?

Sure.  People still enjoy music-based games, and some of those people want games that don’t involve bopping around to a Justin Bieber tune.  Shocking but true.  Naturally, we’re not expecting to move anywhere near the number of units that those games did, but KickBeat’s theme, concept, and visuals will probably draw in a few people who otherwise wouldn’t be interested in a rhythm game.

Beyond the initial 18 tracks planned for the game, will there be additional DLC packs planned with extra songs?

Because of the game’s ability to use your own music, we don’t think that there will be a huge demand for song DLC.  But if we’re wrong, we’ll be happy to add it in and take people’s money. 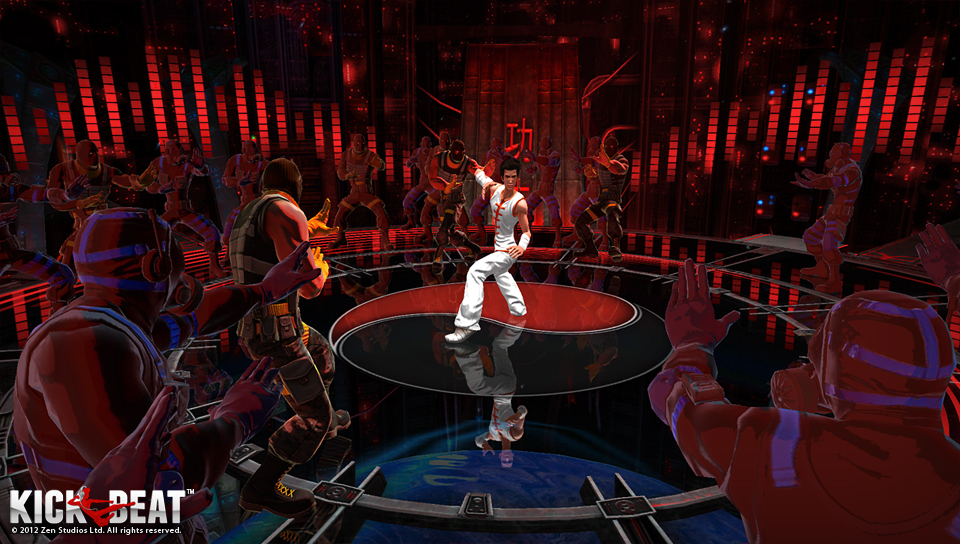 When do you expect to have KickBeat ready for release and what price point can we expect to see it released for?

We want to thank Neil for his time with this interview. For more details about Zen Studios and their upcoming titles, visit their website at http://www.zenstudios.com. All of their games for the PS Vita are available to download from the PlayStation Network Store. At the time of writing, there are currently 28 tables available individually and in packs for Zen Pinball 2.