It seems to be the case that no matter what subject matter Zen Studios turn their attention to, they are able to craft it into an amazing pinball table. Over the last few years they’ve created incredible tables based on everything ranging from football to underwater exploration, the Roman Empire to motor sport and their licenced tables are second to none. They have been bold enough to tackle some of the biggest franchises out there – Marvel, Star Wars, The Walking Dead and even to turn video games into video games and this is what forms the basis of the latest pack of tables for Zen Pinball 2 – Bethesda Pinball…

As with some of their other themed packs based around specific companies rather than franchises, Bethesda Pinball offers a total of three tables to gamers, each based on a different blockbuster game released by the studio. Presented here are Fallout Pinball, The Elder Scrolls V: Skyrim Pinball and Doom Pinball. When I first heard about the pack, I was immediately awash with feelings of trepidation. Now, pinball games are one of my biggest loves on the PS Vita, Zen Pinball 2 especially, but this set really did fill me with dread. Three games that were more at home on the PC than on consoles (despite being available for the PS3 / PS4 etc) but these were all games that generally left me cold. The fact that I had little interest in the originals didn’t help much but despite the talents at Zen Studios I really did wonder if they had bitten off more than they could chew this time in adapting these into a pinball format. 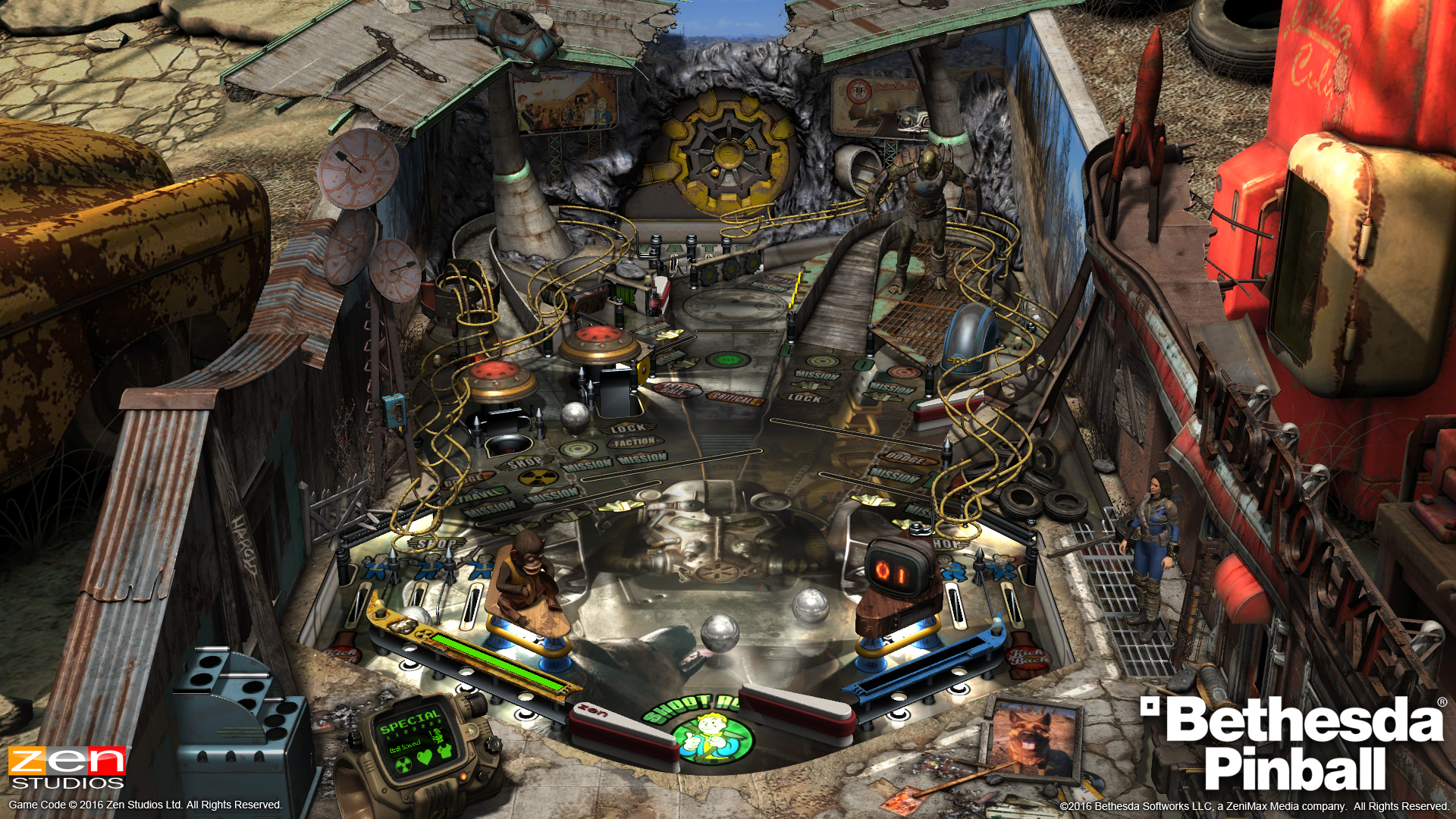 Starting off with Fallout Pinball and I’d say that this is the one I was looking forward to the least. I know I shouldn’t have gone into plaything the game with any pre-conceptions of what it may or may not have been like but it’s not easy. I’ve never played any of the Fallout games before and to be honest they’ve never appealed to me so this table had to stand on its own as a pinball game in its own right. That was a problem I found with South Park Pinball – familiarity with the show really was needed to get the most out of it so was that going to be the case here?

The table itself for me played really just like any other futuristic themed table. Having no real knowledge of the franchise or characters left me struggling to connect with the table in a way that others probably would have been able to. As with the entire pack, Zen Studios have tried to offer greater depth this time around adding a more strategic element to all of the tables developing them into character driven games, adding a more involved story and even progressive RPG-styled characters that evolve as you play. It certainly added to the gaming experience but I couldn’t quite put my finger on it with this one. Despite the table looking and sounding fantastic as I would expect, it left me feeling empty, but then again I didn’t get any of the references in the game. It was still an enjoyable table, but it just didn’t set the world alight for me. Best part of the table, if I am honest, was the mini Space Invaders sub-game.

Moving onto Doom Pinball and this is where things started to pick up. Based on the more contemporary games in the series, it’s sci-fi action horror at it’s finest. Big guns, even bigger alien creatures waiting to be shot at, a table packed with action and wonderfully atmospheric visuals and sound… and of course a BFG. What more could you ask for? In all seriousness though, this one really managed to deliver the goods in every way that Fallout Pinball didn’t for me. Right from the start I was drawn into the table and while the gameplay didn’t feel as deep or as complex as the other two in the pack, it’s an intensive thrill ride from start to finish… just not a table to play late at night with the lights out and your headphones in! 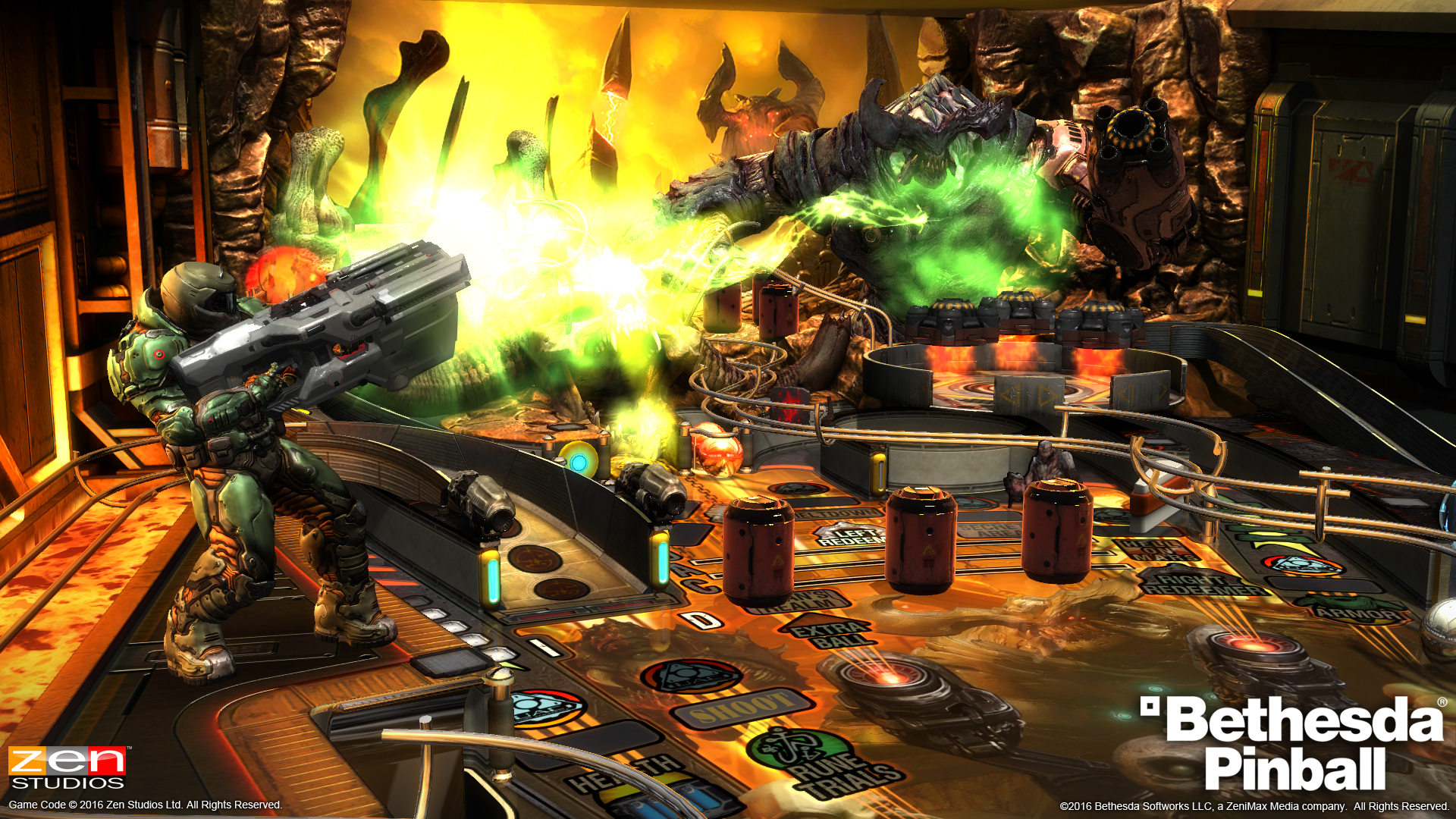 The real showstopper in the pack has got to be Skyrim Pinball though… a pinball table based on an RPG was certainly going to be a tough challenge for Zen Studios and rather than opting for a straightforward fantasy-themed table, they chose to develop a fantasy table with a complete RPG system at the heart of the gameplay mechanics making this one of the most complicated, yet satisfying pinball tables I have ever played. Aesthetics aside, this is an incredibly deep, involving table right from the start. First you choose a character class, each with their own unique skills and attributes as you would in any RPG before being thrust into the game proper. As you play through the table, you have to battle creatures you encounter (by hitting them with the ball, dealing more damage depending on your character’s abilities and your currently selected weapon), take on side quests (now, what RPG would be complete without them?), explore dungeons to find treasure, fight dragons… I could go on.

As you play, you find new equipment and weapons that you can change throughout the game, and you gradually improve your character and increase in skill levels allowing you to increase your basic attributes – again just like a typical RPG. You can lose health during combat that can be replenished using potions or on-table healing point and one of my favourite elements of the table – real character progression. As you start each new game you can begin afresh or continue with an existing character continuing their adventure. 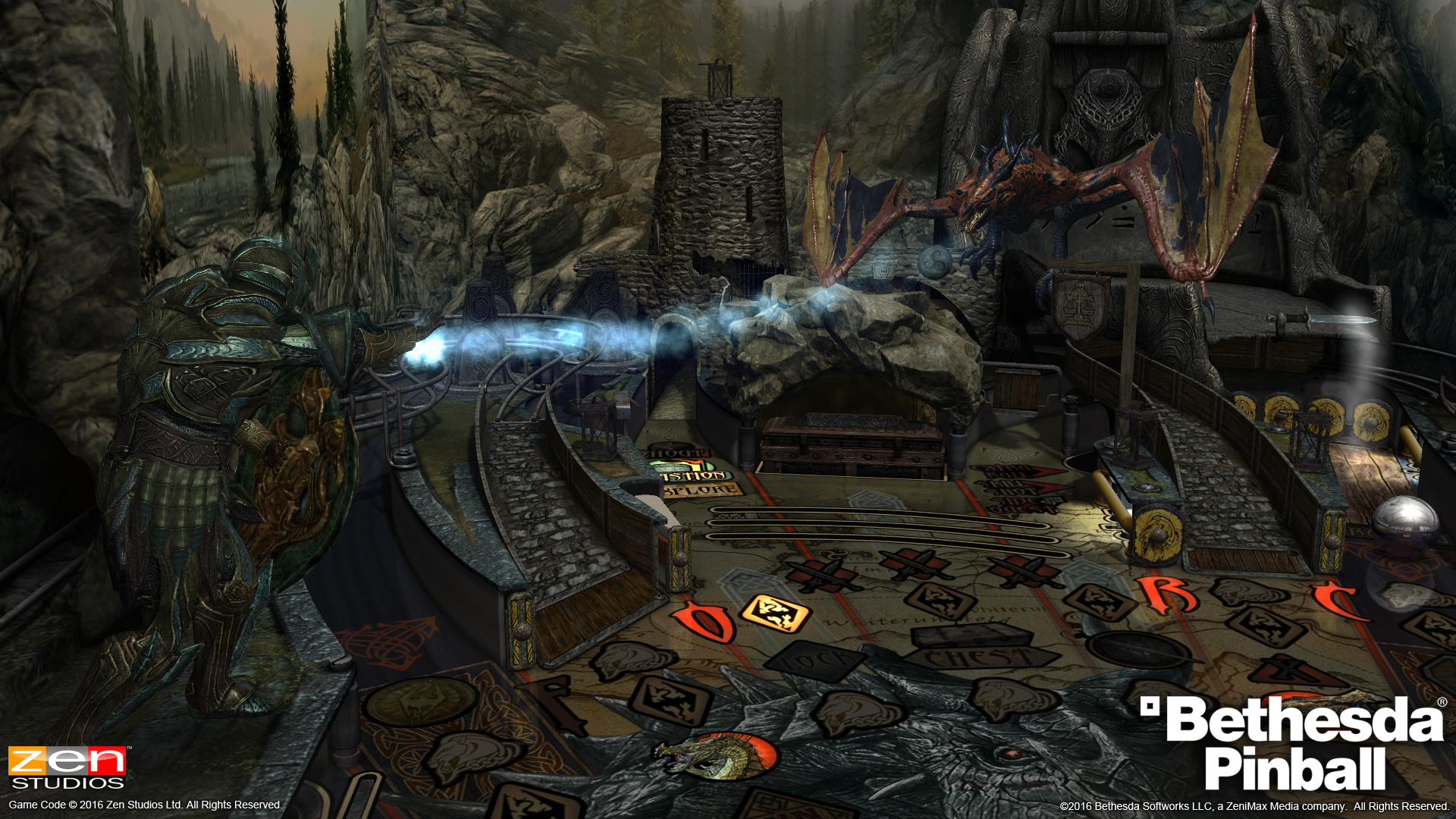 The only real let down with the Skyrim table is the method used to access the character menu itself. You do this by holding down the X button for a few seconds which then allows you to equip weapons or armour, use potions collected, and view skills that your character has acquired during play, but the moment that you leave the character menu the game resumes instantly and if you didn’t manage to enter the menu in a safe spot then you can very quickly lose a ball… something I found out all too freqently.

The RPG element really does make Skyrim Pinball stand out head and shoulders above not just the other tables in this pack, but above almost every other table Zen Studios have released to date. It’s incredibly addictive, absorbing and will keep revealing its secrets to you months down the line. Add the lavish visuals and wonderful soundtrack and it makes this a damn near perfect pinball table.

This is one of those rare occasions where I can honestly say that an entire pack is worth buying for a single table even if it is one of their more expensive packs coming in at £8.99 for UK gamers. Whether you have any interest in the Doom or Fallout tables isn’t really important – the Skyrim table is so good that you really must own this pack just to get that in your pinball collection and then think of the others as an added bonus! One above average table, one great table and quite possibly Zen Studio’s finest hour makes this for an absolutely unmissable pack.

About Simon Plumbe 894 Articles
Husband, father and lifelong geek. Originally from the West Midlands, now spending my days in South Wales with my family and a house full of animals. Passionate about video games, especially retro gaming, the Commodore 64 and PlayStation Vita. Love pro wrestling, sci-fi and I'm an animal lover and vegetarian.Enjoyed this and my other articles? Why not buy me a coffee: http://ko-fi.com/simonplumbe