Times are challenging right now for everyone. With nations around the world in various stages of lockdown many of us are having to find ways to keep ourselves occupied. Geeks have joked saying that it’s easier for us to cope, claiming that our hobby is a solitary pastime as it is. Content creators have been more active than ever online. Even celebrities have taken to Twitch and other streaming services to entertain their fans. But what if our circumstances change further? How easy is it to really cope with little more than the PS Vita and a few other things to hand?

Not quite, but I live in quite a remote area in South Wales. It’s a small village with one shop and limited public transport. Usually we rely on deliveries for food or planning shopping trips around sparse bus timetables to get what we need, even more so having exotic pets. But since the lockdown life has been difficult to say the least. Food delivery services are almost impossible to get and most of our buses have been cancelled.

Our nearest bus is a 20 minute walk away making weekly shopping extremely difficult for more than a few basic items. Local taxi firms became a very expensive lifesaver. And as with many families, having access to services like Netflix, Amazon and a strong fibre internet proved to be a vital part in helping us stay mentally healthy.

But then our lives were turned upside down at the start of April and we had to face a new challenge as a family. My dad was taken ill after a fall and as a result was rushed into hospital. He’d been living alone after my mom passed away two years earlier but being prone the police had to break the door in to get to him. Having no-one to look after him when he was likely to be discharged, and a house that was now very vulnerable, I made the 160 mile trip to house-sit and wait for my dad.

We knew it wasn’t going to be a short trip either, expecting me to be away for some time. I quickly gathered a few things to keep me occupied before my dad got home, some food supplies (being a vegetarian there wasn’t much there I could eat), and I made my way…

Going by train meant that I couldn’t carry much. About a week of clothes, medication, food and enough to keep me occupied when my dad wasn’t at home. Easier said than done but it did mean that I had to think twice about what to pack as space was going to be at a premium for everything and I had to anticipate being away for quite a while.

It also meant that I was going to be without access to my PC for a while. With my dad having no PC or internet connection, I was going to have to rely on my phone for everything. Whether I wanted to work on our websites, research investing in bitcoin as digital currency, checking in on friends on social media, watch streaming content – my phone was going to be a lifeline.

PS Vita To The Rescue

Being a gamer for almost all of my life, this was probably going to be my biggest struggle. At home I’ve got a man cave with over 40 gaming systems and thousands of games at my disposal. And under the family television are a further six consoles with thousands more games all on hand whenever I want them. Gaming plays a huge part of my life and for me it’s been an essential way for me to cope with stress.

Fortunately, I’ve been a huge fan of the PS Vita since it was first released. In fact, along with the Commodore 64 I’d say it’s become one of my all time favourite platforms. Whenever I have to travel – whether it’s extended shopping trips or longer distance journeys – the Vita goes with me, and this trip was no exception.

While I prefer physical over digital games on the Vita, it doesn’t mean that I don’t own any digital titles. Quite the opposite. I’m actually quite obsessive when it comes to my digital Vita collection and I keep everything downloaded all the time and have almost a dozen memory cards. It’s expensive, but it meant that I was able to take over 1,000 downloaded games with me including PSP, PSone titles from the PlayStation Store as well as the top Minis games in my collection.

Combine that with a further 30 cartridges either boxed or packed into the carry case and I’d have enough games to last a lifetime!

I guess at home I took Netflix, Amazon Prime and our other streaming services for granted a lot. Not having access to these was going to hit me hard. My dad had no satellite TV or cable so I was going to be faced with just basic channels while I was away. Freeview may have a lot, but if you’ve ever sat through and tried to watch them, the choice is somewhat… mundane.

My answer was simple. Both Netflix and Amazon allowed for a limited amount of content to be downloaded so I filled my phone up as much as I could with films and TV shows from my watch lists. It gave me the chance to carry on with shows I was part way through, ones I hadn’t started on, and others I was curious about. In total, about 40 hours of content spanning a dozen franchises. 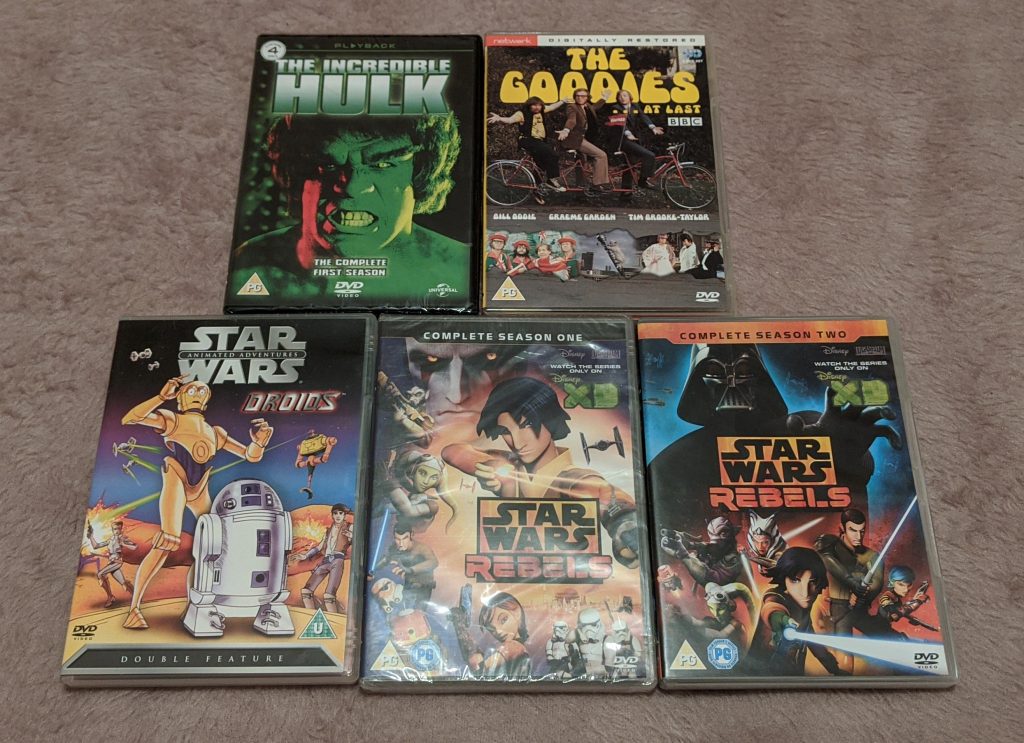 And if I needed a break from those I packed a couple of slim DVD sets giving me a further five seasons of TV to watch. The first season of the classic Incredible Hulk series with Lou Ferrigno and the first two seasons of Star Wars Rebels (which I still haven’t seen!).

But I didn’t want to sit in front of a screen all the time. I took the chance to make the most of every spare bit of space in the bag I took with me and packed a small selection of magazines, novels and graphic novels. One thing I didn’t want to do is stick with the same type of reading material though so variety was going to be essential.

So first thing I grabbed were a few volumes from my Asterix collection. I’d been a fan since I was young, and it had been a while since I’d visited the adventures of the brave Gaulish warrior. A more modern hero beckoned with a Spider-Man graphic novel that I’d been planning to read for about 18 months then my attention turned to a few old Doctor Who novels. Then finishing off with a few magazines, with the Doctor Who magazine having an extra surprise… 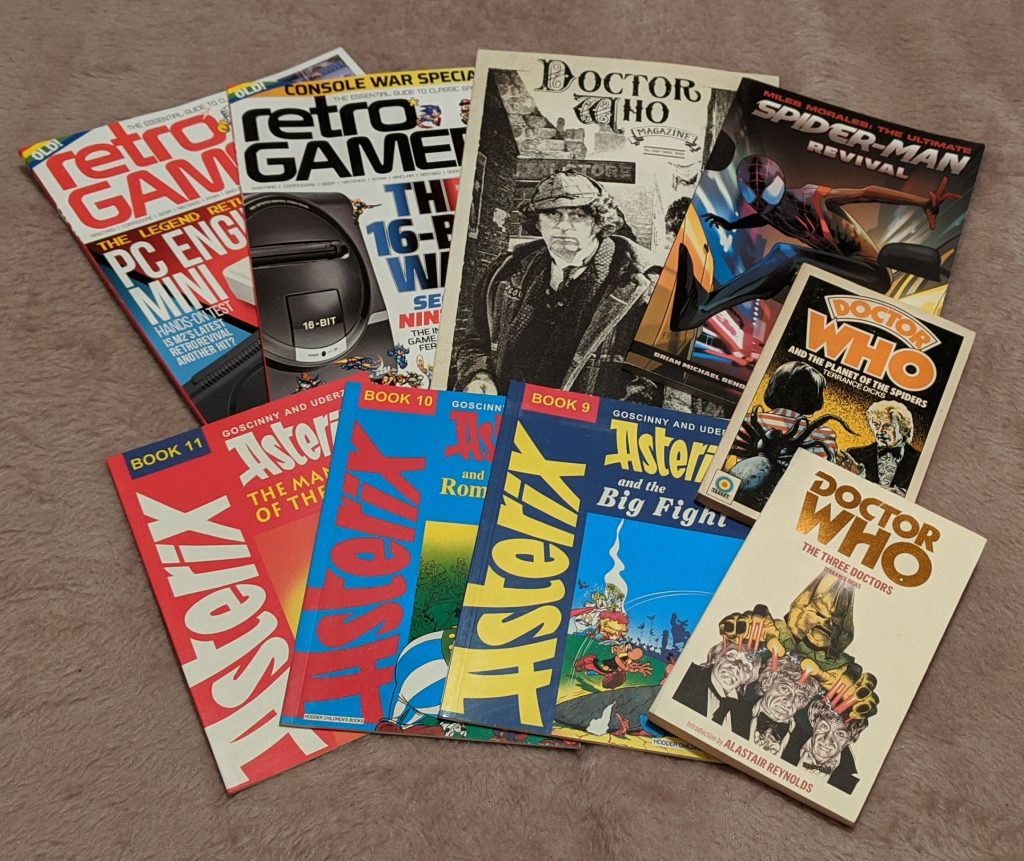 One thing the lockdown has seen is that a lot of companies have released a lot of digital products freely. Sponsors of one of our video series, Fusion Retro Books, have made some of their books and magazines available for free downloading sporadically which has been fantastic. And I’ve been enjoying a lot of the Doctor Who audio novels from Big Finish who have been giving a free title away each week. In fact, a recent issue of the Doctor Who magazine had a full title as a giveaway as well.

The generosity has been incredible and it hasn’t just been limited to these but being away from home it’s all I’ve been able to access. But even companies like Sony have been involved giving away free games. It’s almost restored my faith in humanity seeing everyone coming together to make sure that we all have some way to keep our mental health as strong as possible.

Appreciate What You Have

While isolation has been far from easy the last few weeks, having all of this at my disposal has made it much more bearable. It’s astonishing to think how much we take all of this for granted though – easy access to any media we want on demand and to be able to get to our collections whenever we want. Take that away and leave us without human contact and life becomes so much more difficult.

If you’re fortunate enough that you are safe at home, surrounded by loved ones or still able to have contact with friends – whether it’s in person or online – don’t take any of it for granted. Let people know you still care and check up on them. Tell family that you love them and hopefully we’ll all come out of this as better people.