The next part? Yes, there’s even more… My INterior. Little Big Planet may give players a Pod to customise and decorate but not Disney Infinity… oh no. Disney Infinity gives you an entire mansion to customise, build, shape and decorate to your heart’s content! Now this may sound strange, but this is an incredibly compulsive and addictive part of the game as I quickly found out. You start out with one of the Hosts (supporting characters who provide you with assistance and tutorials throughout the game) introducing you to your My INterior and placing you in the middle of a large, ornate hall in what is obviously a large building… or could be if there were any doors or anything other than a single room. While in here, you’re given tasks by different characters either to decorate rooms for them, find lost objects or build things for them but for the most part you’re simply left to your own devices to build, decorate and be creative.

My own kicked off with a basic look for the entrance hall, following instructions from the host but then branching out… some rooms followed different decorative styles as the mood took me, or as I was given instructions, adding new rooms, corridors, extra floors, slowly expanding out, adding furniture I purchased along the way. And then came my bright idea… As I kept buying new figures I needed to develop them and help them earn more experience quickly and the best way for this was in combat. They needed training and what better way – especially as I was focusing on Marvel characters – was to construct a SHIELD training facility! A fireplace in the main hall is set up as a doorway so linking this to a trigger allows you to hide a room behind it. I took this further, created an entire network of SHIELD themed rooms and corridors (with the occasional room themed for specific superheroes), culminating in a combat room, complete with spawning points for enemies, a trigger panel so they were only spawned when I needed them to be and a few other control gadgets. Relatively simple to do but it was damn fun doing it! What amazed me was just how much time I actually spent doing just this part of things alone… there were some game sessions where I spent just as much time in the house than I did doing anything else and loved every minute of it!

As a game, Disney Infinity really does have so much to offer that you very quickly forget the franchise that it’s based on. You really don’t care that you can wander around and bump into Mickey Mouse, dozens of Disney Princesses or the next minute walk right into Nick Fury when it’s so much fun. Voice acting throughout is superb, the game controls are well thought out (and enhanced further when playing on the PlayStation TV as it makes use of the additional shoulder buttons) and it looks good. The only downside I really have is that it doesn’t run in the Vita’s native screen resolution and that it is prone to slowdown when there’s a lot going on on-screen but with something this complex and creating such vast game worlds I guess it’s understandable and just about forgiveable.

The last element to the game that I haven’t covered yet is the Power Discs. Available as optional add-ons blind-bagged at retail in packs of two, these can be placed on the Infinity Base and unlock additional functionality to the game. There are several types of discs available. Decorative provide different backgrounds and planetary textures for use in your Toy Box, there are weapons, accessories and new vehicles for use with characters in Toy Box mode and in games, and supporting characters. While these need time to recharge between use, they effectively act like a “special move” and bring in secondary characters who join you in combat for brief periods of time helping you when you most need it. It’s a great way to boost the game but the big problem I have with them is the way they are distributed. They’re not cheap at £3.49 per pack of two discs and it’s very easy to get a lot of duplicates. 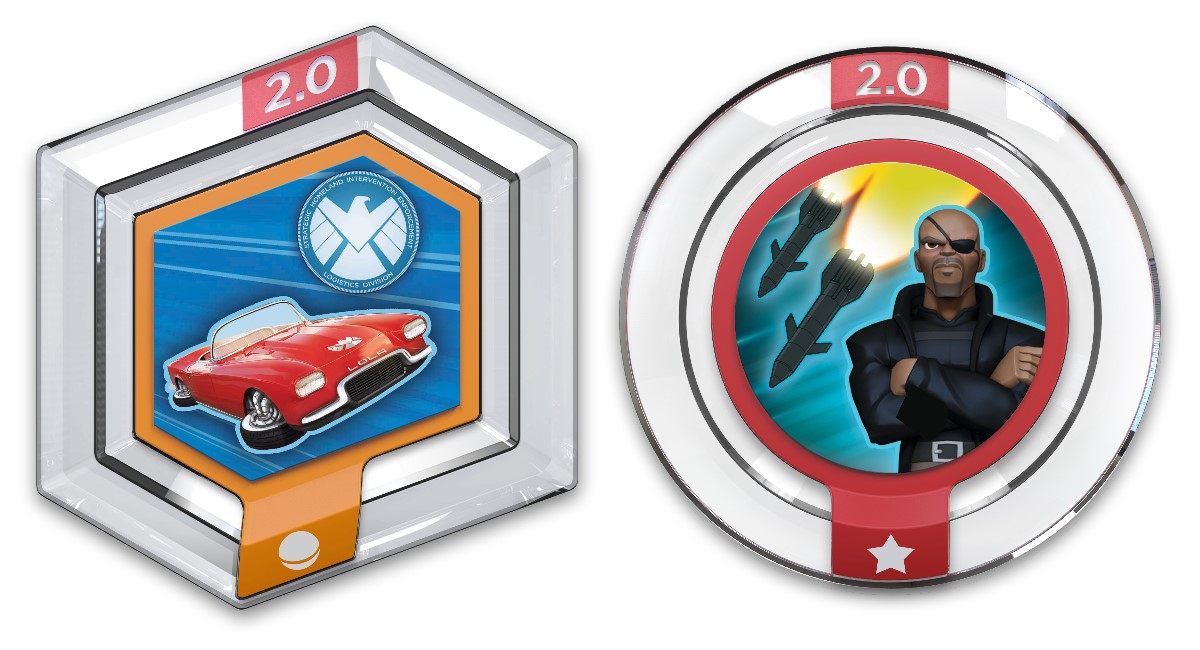