It’s quite easy usually to define indie games into one of a handful of preset genres. Puzzle, platform, shoot-em-up, RPGs… usually a few minutes playing a game is all you need to decide what a game is all about. But then you get games like Deep Space Rush… Released by Ratalaika Games it’s a hybrid of several game genres. Built using the Construct game engine – and the first of Ratalaika’s console ports to be created with it – it’s a blend of the procedurally generated endless runner, and platform run-and-gun side-scrolling shoot-em-up. 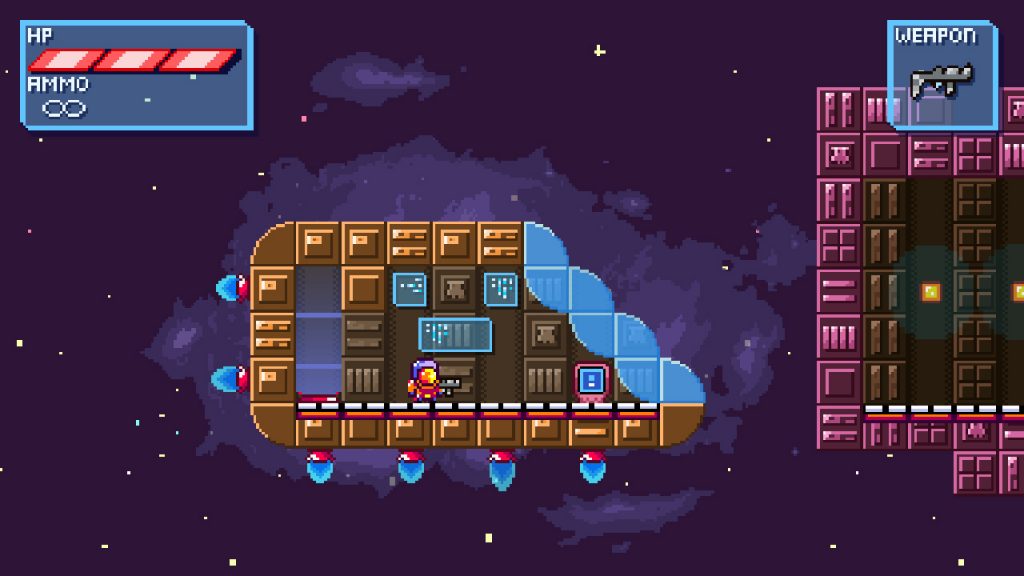 The protagonist is an unnamed member of the DeTeam – a group that is tasked with protecting various scientific outposts from outbreaks of viruses. You’ve been sent out into space to clear these stations of these mutated viruses and all manner of aliens along the way, sealing off any cleared sections of the stations behind you making it safe once more…

Essentially what follows is a side scrolling shoot-em-up. Armed – initially – with a laser rifle, you have to progress through the randomly generated craft. Eradicate anything that gets in your path. jump over traps or hazards in the way and collect coins that you find en route. You start with a finite amount of health so you can only take a few hits from what lies ahead before it’s game over. And at the end you’re given a breakdown of your score and statistics from that run.

As you move through the ship, sections close off behind you once you have cleared them. Each section has a different background colour to the one before it so you know when you are coming near to the end so this can help if you’re being pursued and want to trap your attackers behind a wall. While this can be a great way to get to safety, these walls also stop you from running backwards so you have to look ahead and always be on your guard for what lies ahead. 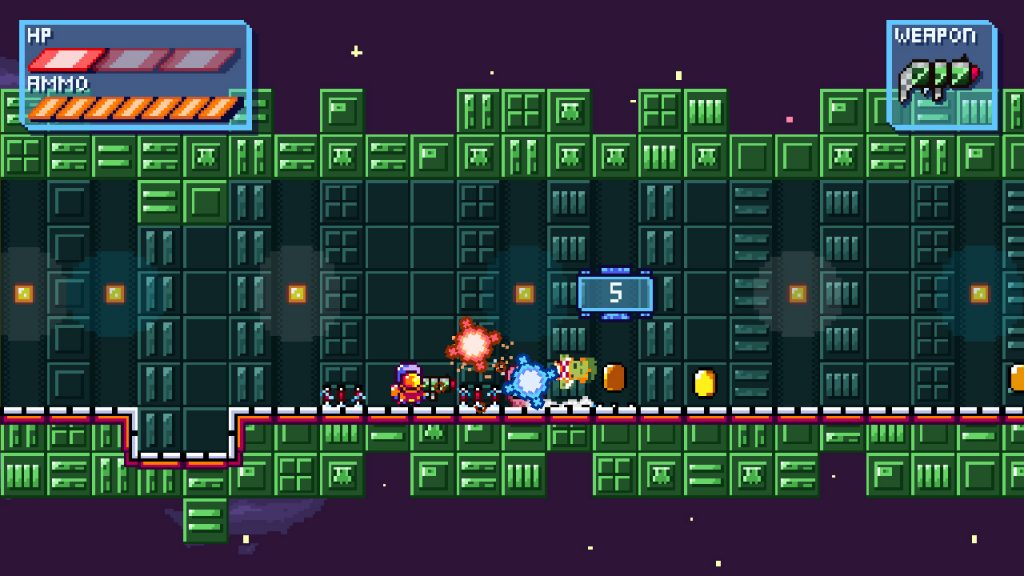 At the start of each game, and at random intervals, shop units appear and you can use these to spend any coins that you’ve collected. Different powerups are available along with new weapons to unlock and upgrade for use during the game. Once purchased, these are available for use permanently in every single run. One of the most important is the health upgrade and each purchase adds an extra bar to your health meter.

Each of the weapon purchases unlocks them for use in the game. Unlike normal weapons that are available for collection in other shoot-em-ups, Deep Space Rush works differently. Unlocked weapons appear randomly during the game and picking them up swaps over to them automatically. However each is only available for a limited period until it’s ammunition runs out before reverting back to your default weapon. You can upgrade each weapon’s ammo capacity but once you pick up a new weapon you have to think carefully to make every shot count. 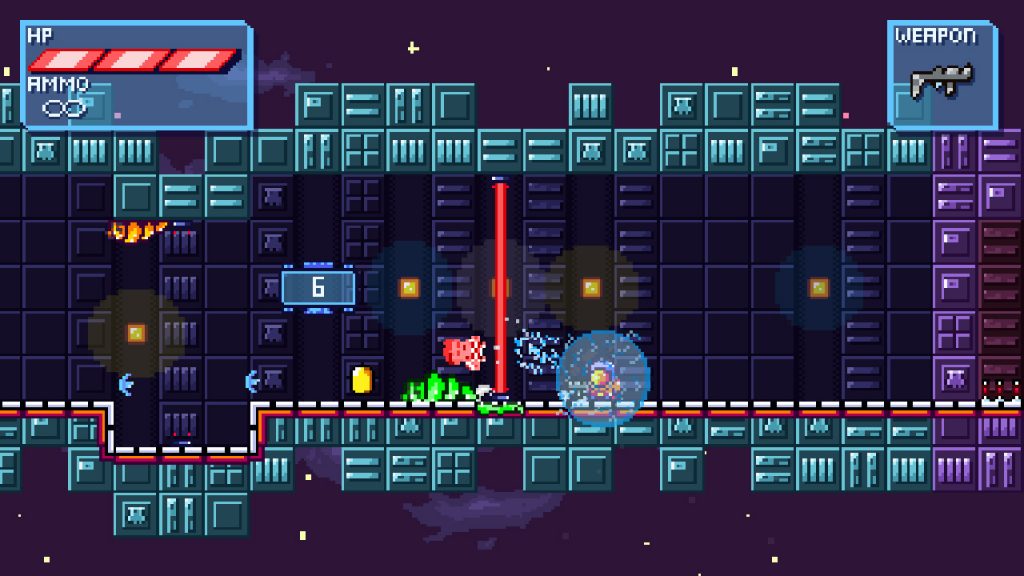 Once again, it’s another retro styled game from Ratalaika and for many this may be off-putting. Looking across their entire range, this style does seem to dominate the look of their titles. So those of you who aren’t fans of retro games or at least the retro look may be disappointed with the look and feel of Deep Space Rush. Personally, I thought it worked quite well and everything was detailed enough to be clear while still keeping the cute retro appeal.

Add the great sound effects and superb chip soundtrack and it left me quite happy but again it’s something that’s down to personal taste. Those of you expecting your games to meet contemporary AAA standards certainly won’t find that here so it will have to rely on its gameplay to win you over…

And for the most part it does. The hybrid style of side-scrolling shooter and endless runner works surprisingly well and captures the addictive qualities of both. I found the weapon system refreshing and really added something new to the genre. What did let it down wasn’t the difficulty – which seemed to be reasonably well balanced – but the ease at which you could actually complete every challenge set for you by the game…. 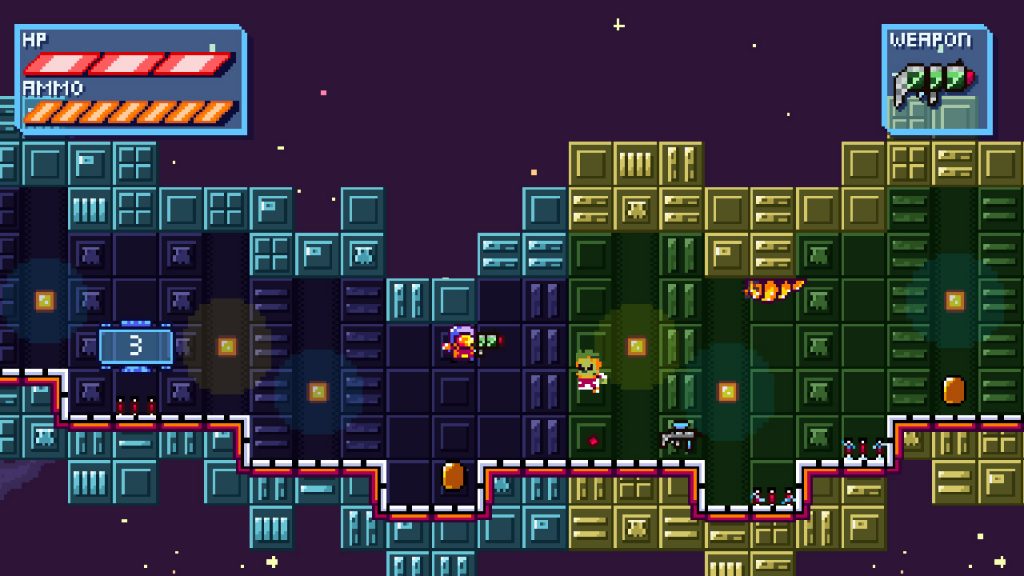 Deep Space Rush is a trophy hunter’s dream. While there aren’t an incredible number of trophies to collect, they can all be obtained – including the all-important Platinum – in around 30 minutes. There are no special requirements to accomplish this either. Simply play the game repeatedly, buying and upgrading your weapons as your funds grow, and they’ll unlock as you go along.

In fact, longevity and replayability is the game’s real issue. Beyond the trophies, I doubt that it will take more than an hour of play in total to obtain all of these AND upgrade all of the weapons and power-ups to maximum. That leaves players with nothing new to achieve from repeat play beyond beating their own high scores.

While the game doesn’t lend itself to more diverse gameplay options, what Deep Space Rush needed was a slower upgrade system and tougher trophies. More  basic objectives couldn’t be added but if an attrition system needed to be used then higher goals needed to be set. One option to have extended the game’s lifespan could have been to have added a randomised mission system akin to games like Jetpack Joyride and while that didn’t add anything to the gameplay, it did encourage repeat play beyond completing the core game. 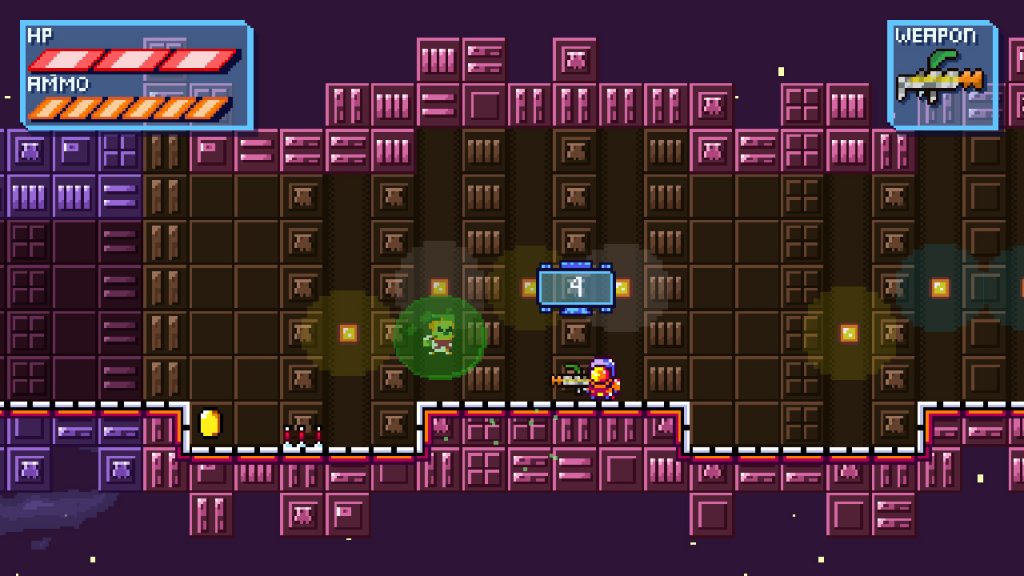 Don’t get me wrong, I had a lot of fun playing the game but I can see that even the procedurally generated nature of the game may not be enough to keep people coming back to it without any goals or challenges to strive for. And that’s a crying shame because it’s an addictive platform shooter with a lot going for it. The weapon system is original, it’s fast and frantic and the different alien types really do bring their own unique attributes to the game rather than just their appearance as in so many other games.

Overall it’s a fun game but don’t expect this to be one you’ll be coming back to over and over again. It’s a great budget buy for trophy hunters, and even more so being a Cross Buy title. It’s a fun game and it’s available for a wallet-friendly price, but sadly in this case you get the longevity to match.