The keynote speech/press briefing from SCEA barely mentioned the PS Vita handheld, with only the odd note that a game will also be on Vita and to mention that more than 100 PS Vita games are in development (which was followed a few days later by Sony saying they are cutting back on internal PS Vita game development!) It really doesn’t help that Andrew House as the head of Sony Computer Entertainment (worldwide) has bascially referred to the PS Vita as nothing but a PS4 accessory with PS Now access. Great. It’s a good job Microsoft’s marketing misfires are worse than yours SCE, otherwise you’d be in real trouble about now.

Admittedly the PS Vita has never had a good E3 and usually better news for the format comes from Gamescom (Germany) and the Tokyo Games Show. However as a British gamer, I have to say the lack of a big British show especially with all the British developers and our new tax breaks, is one hell of a kick in the teeth. Bring back the PC Show! (For reference before EGX/Eurogamer Expo and when the ECTS show was just a small event, the PC Show, which replaced the PCW Show, was a huge event based at Earl’s Court. It was used as both a trade and public event and saw companies such as Ocean take huge stands to show off their new releases across the home computing formats – the Thursday/Friday was usually trade only with a bit of a re-shuffle of the show floor for the weekend when the public got entry. EGX has the potential to be such a show with enough industry support, in my opinion.)

A few games were semi-mentioned as having PS Vita versions as well as PS4 in the forms of the Grim Fandango remaster and Entwined along with a bunch of titles from Devolver Digital; Broforce, Titan Souls, Not A Hero, and Hotline Miami (2): Wrong Number.

The presentation went on to fully confirm PS Now on PS Vita, which we were pretty much assured of previously. Other games confirmed as in development as part of the 100 titles are Tales Of Hearts R (Bandai Namco), Child Of Light (Ubisoft) – and there is a Deluxe edition just as there was for PS4/PS3 in the UK, Tales From The Borderlands (Telltale/Gearbox), Minecraft (Mojang) with the full console experience with co-op (which we already knew) and Disney Infinity 2.

Also shown or revealed at E3 (but not in the keynote presentation) were Invizimals: Resistance, Gravity Crash Ultra (complete with remixed CoLD SToRAGE soundtrack) and Tetris Ultimate (which was actually revealed in a pre-press conference interview with Alexey Pajitnov, the original game’s creator… Why on Earth was that not in the main presentation? Still no mention of the 64GB memory card either. C’mon guys – we could do with those with all the content we want to be downloading!

Then we discovered that PlayStation Vita TV was coming to the USA and Europe including the UK. Which is about bloody time as frankly we could have done with it by Easter just gone. However to anyone with an interest in the PS Vita it feels like SCEA and SCEE have almost betrayed the PS Vita by renaming the device the “PlayStation TV.”

Firstly this is bloody confusing, as we have already had two PlayStation TV units – the first was a Sony HD Ready TV with a PS2 built-in, and the second being the PS3 targetted 3D TV (with dual play fields for the two sets of 3D glasses used by the players) and Play TV on the PS3. Not helpful. I am probably going to consciously and continually refer to it as the PS (VITA) TV in defiance ;).

Then you have the fact that the main selling point and first thing mentioned by SCEA’s head was pairing it with the damned PS4 for remote play. Pushing this first and foremost is a mistake as a cheap entry level console would be of interest to far more people than using it as a glorified video sender for the tp of the range console that an awful lot of people cannot afford. (On a *very* personal note I would also have to say that apart from Resogun, there isn’t anything on the PS4 worth buying it for that isn’t also on PS3 or PS Vita at the moment, bar the Infamous sequel – and that’s just a sequel. £350 to play a Defender clone… hmmmm…)

The next biggest selling point and thus second thing mentioned was PS Now – which allows you to play PS3 games remotely from Sony’s PS3 server farm. Lovely, now if Remote Play on the PS3 had been done properly it wouldn’t be needed, and PS Now is going to cost you money… EVEN IF YOU ALREADY OWN THE PS3 GAME! Just to really take the mick this also makes PS4 remote play even more pointless as it now leaves just the PS4 exclusives as worth using the feature for…

Finally it was revealed it was in fact still a PS Vita TV as you can play most PS Vita games plus PSOne and PSP downloadable games from the PS Store. You know I am getting fed up of them calling downloadable games “digital”, as if the bleeding physical ones are analogue or something. Stupid terminology that’s as bad as calling distributed computing via remote servers a damned “cloud.”

So that was pretty insluting to the PS Vita as a platform, for a machine that shares a core with the PS Vita slim to only have the fact it can play PS Vita games mentioned in passing (and it wasn’t even made clear whether this was just downloadable compatible PS vita games or physical ones, though the tech specs made available on the official PlayStation websites do confirm that PS Vita TV’s Vita card slot is being retained.)

There was also no mention of PS Mobile games, though the vast majority of them probably rely on the touch screen. However, I do question quite how hard it would be to add an onscreen cursor/mouse pointer that can be controlled via the DualShock 4 touch panel (laptop style with the button press to the touch pad acting like the left mouse button) to the PS Mobile runtime wrapper on the PS (VITA) TV hardware.

The machine is expected to run all PS Vita games that are not reliant special touchscreen, rear touch panel or camera functions (though I do have to question how hard it would be to add a USB hub and a PS3 Eye or two to cover the camera functions…) It goes without saying that this had better include WipEout 2048, Need For Speed Most Wanted, Luftrausers etc and I do hope Little Big Planet Vita and Tearaway will get compatibility patches (again … PS3 Eye will do nicely I feel).

Price wise the microconsole will have a US retail price of US$99 + tax – we are getting it at £84.99 inc. VAT (bearing in mind the US price point works out at £59 ish and with the VAT around £70, so that extra £15 seems a bit steep, in my own opinion.) I expect with UK retail being the way it is though, we may see street price discounting and £79.99 seems a lot more attractive and sensible, at least to me.

SCEE have not announced any bundle options thus far, and SCEA will be offering PlayStation TV with a HDMI cable (there had better be on in the solus pack too!), a Dual Shock 3 (even though a DS4 is what you’ll want for PS4 remote play), an 8GB memory card and a download code for the PS Vita version of the Lego Movie videogame. This value pack will retail for US$139 + tax, which is around £82 plus VAT, resulting in about £99 inc. VAT.

I do hope that SCEE have the sense to do a Value pack for the UK with a 16GB memory card as a minimim, and a Dual Shock 4 controller as it’s a fantastic piece of equipment and quite superior to the DS3. I also hope to see exactly that bundle available with different physical game options such as;

As you can probably tell, I would have though the machine would sell better in the UK targetted as a Microconsole, which was a cheap way to:

Remote Play and PS Now (whenever it hits the UK) are secondary considerations at best!

However those of you who have read my previous blogging about the PS (Vita) TV may recall that I personally feel it could be a perfect way to get younger gamers into game development. Unity is a game development platform that supports the PS Vita and a simplified, dare I say it, AMOSified (AMOS was a beginners development tool using BASIC on the Amiga platform), version of it running on PS (Vita) TV could certainly kickstart (you can read that as a reference to the Amiga Kickstart ROM, or Kickstarter – both work) some creative passion in our youth, and perhaps enter schools in a very Raspberry Pi like fashion (hell I wouldn’t say no to ARMIGA arriving on it one way or another – http://www.armigaproject.com).

I will leave you with a final thought… 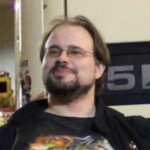 Sven Harvey (you can also find Sven at Geekology and his own writing blog.)