Poker is one of the most popular and entertaining casino games and it’s even better when you can play with 7 of the biggest gambling legends out there. This is what World Championship Poker 2 brings you, among other fun things. Let’s see why you should try this game on your PlayStation Portable!

Who can you play with?

Being able to learn from and play with the best Poker players is something a lot of enthusiasts are looking forward to.

This game gives you the chance to challenge Howard Henry Lederer, an American professional Poker player that holds two World Poker Tour titles and has also won two World Series of Poker bracelets. Known by both Poker players and fans as The Professor, he has written many books on poker strategy, so playing with him will be a real challenge. You will also have the chance to play with his sister, Annie Duke, Greg Raymer, Paul Darnen, and other well-known professional players.

What can you play?

Poker comes in many variations and they all have their special feature that makes players come back to it. WCP 2 offers you 14 of these variations to enjoy and have fun with. However, the Texas Hold’em is usually the more popular option and, in this case, too, is the one you shouldn’t miss. 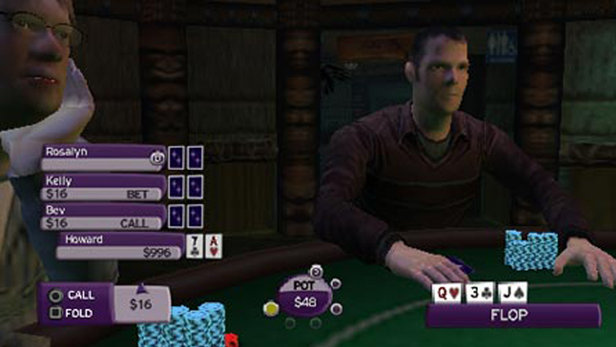 What features does this game offer?

WCP 2 is a great game that comes with a wide variety of features meant to offer you a great experience, as similar to the real deal as possible. Here’s what you get from this awesome title:

Even if you cannot benefit from any type of casino free spins or other deals casino games offer, this product has plenty of great things in store for you.

For some gamers, the way a game looks is very important, while for others, what matters the most is the atmosphere it can create.

WCP 2 was released in 2005 for North America, while for all the other regions it became available two years later, in 2007. Back then, the visuals were great but some players might find it a bit outdated, compared to the newest releases. However, the atmosphere and gameplay it offers are still some of the best in the industry. The opponents seem to really be involved in the game and they have actions and reactions that will make you feel like you are playing against real people. Or at least with the avatars of real people.

Is this game still worth playing? Definitely, yes. Even if it was released more than 10 years ago, this title comes with a great gameplay, awesome functions, and a very realistic atmosphere. Both beginners and the more experienced poker players can enjoy World Championship Poker 2 on their PlayStation Portable. Give it a try yourself and see which gambling legend you can steal the victory from!