In this occasional series, we’ll take a popular multi-format game and see how the PS Vita stacks up against the other versions of the game that are available on the market and see if it really is worth choosing the one for our favourite Sony handheld rather than any other. To kick things off, we’re taking a look at Halfbrick Studios side-scrolling jump and run game Jetpack Joyride. We’ve already taken an in-depth look at the PS Vita version in our review here but for the purpose of this feature, we’ll now put all of them up against each other: PS Vita, PS3, PSP, smartphone, tablet, and Facebook. 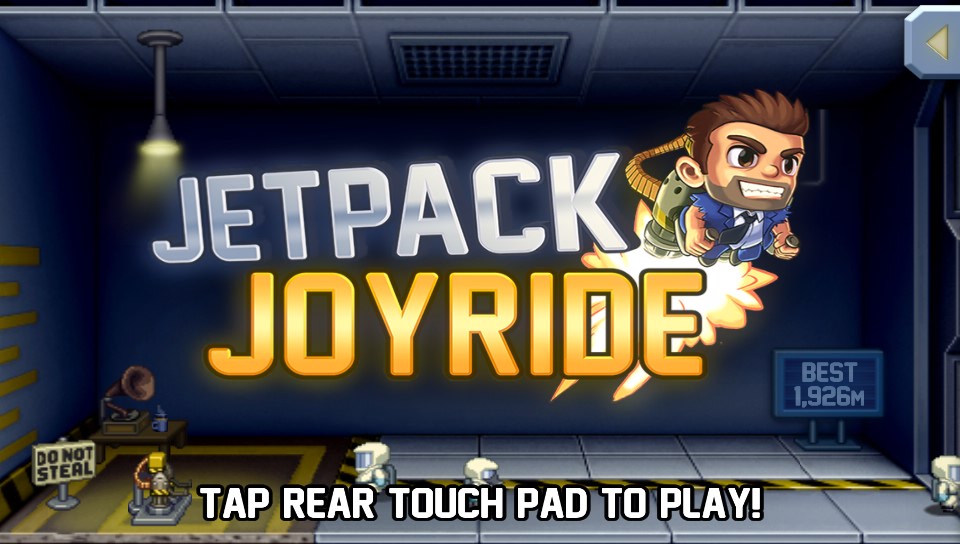 The basic game is the same on every format and they play identically – the same weapons, power-ups and identical gameplay. On first impressions, the only general differences between them are cosmetic, with the exception of the methods they are played. All are downloadable with the exception of the Facebook version which is browser based, and the PSP version which is part of the Minis range. All of the others are free and the cost to play is part of bonus paid-for content.

Visually, while none of them offer state-of-the art graphics on their host system, even on the smartphone versions, they are all pleasing on the eye with nicely drawn and animated characters, smooth scrolling, and good if not greadbreaking effects. However, the Facebook version is prone to freezing and stuttering at times and sadly the graphics for the PS3 version have been drawn at a lower resolution that the game’s output so they have a slightly washed-out and fuzzy appearance. 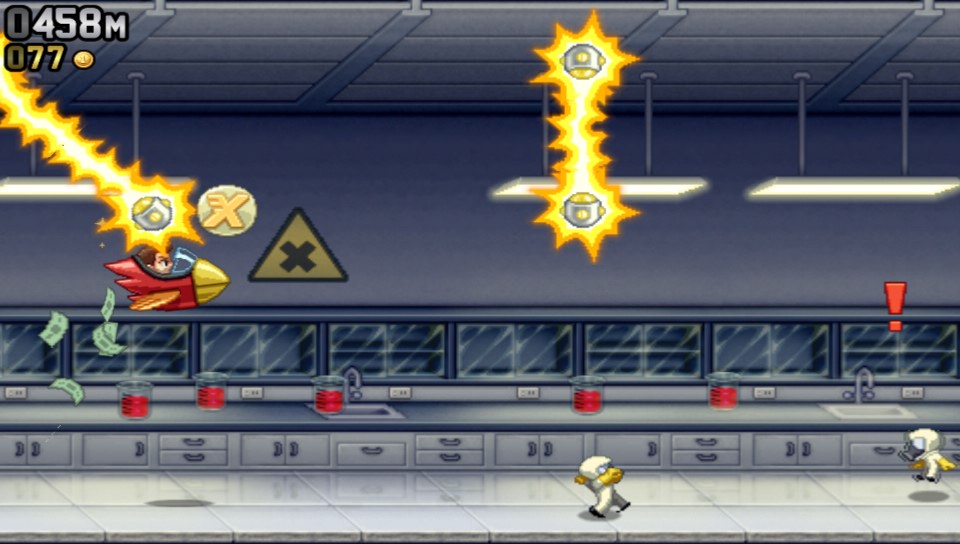 The same music and sound effects have been used on every version of the game, but because you are most likely to be running the game through a television the PS3 wins out here if only because of the system you will have the console connected to. Again because of hardware limitations, the smartphones will struggle to reproduce the sound to the same quality as every other format.

Smartphones, tablets and the PS Vita all use touch screen controls for the game. The Facebook version uses a single mouse button and the PS3, PS Vita and PSP versions can be controlled use a single action button and this is the main area where the game differs. While touch controls do work, they are not as responsive as buttons and can obscure the screen, even more so on smartphones. The Vita have an incredible advantage here over all of the other formats offering an astonishing choice for the gamer. If you prefer touch controls you can use either front or rear, but at the same time you have the old-school button controls from the Facebook original which I have to admit to prefering personally. It really is down to personal choice at the end of the day, but the Vita truly does offer everyone a method that suits their own playing style.

All but the PSP version are free and if you play the game enough, there is no need to pay anything to play the game. While you can buy coins in the game to buy power-ups, enhance your vehicles and additional outfits quicker, it’s not essential as you can collect enough coins if you play the game enough times. When it comes to the actual pricing of the coins themselves, the Facebook version uses Facebook Credits which is a somewhat vague system of charging as all the in-game system lists is the credits value of items and not the cash value. The actual price is only revealed once you go through the the payments page. If you already have credits in your Facebook account it is easy to make a purchase without realising how much you are actually spending on playing the game.

In fact, this is something that does raise concerns with Facebook games generally. With the ease of making in-game purchases on Facebook – either by credit card or by making charges to mobile phones – it is easier than other systems for gamers to make purchases for large sums without realising. In fact, this is more of a risk when your mobile phone is attached to your account and is something that Facebook games have been openly criticised for.

Comparing prices for the other formats, the PS Vita and PS3 seem to be more expensive that the smartphone / tablet add-ons, in some cases by between 50-90% depending on the coin pack you purchase so it’s worth considering your options carefully if you do decide to purchase coins. In contrast, the PSP Minis version costs £3.49 from the PlayStation Network Store and is the only paid version of the game. However, paid doesn’t always mean better. The rate at which you collect coins is still the same as the other versions of the game so it takes just as long, there is no way to get coins faster as there is no option to purchase additional coins from the PSN Store (this was never available as a feature for any game in the Minis range) and to add insult to injury, the game itself is cut down from its free counterparts so there are missing jetpacks, gadgets and other options.

Confusingly, a second version of the game is available as part of the Minis range which is identical to the first in every way apart from the price. It only costs £1.74 but comes bundled with a starter pack of 50,000 coins. For some reason, the original is still available for £3.49 with no added features or bonuses so if you do purchase this, you need to be wary of which edition you buy. The lower priced edition is still a cut-down game, but the lower price and bonus coins on offer do make it a more tempting proposal. 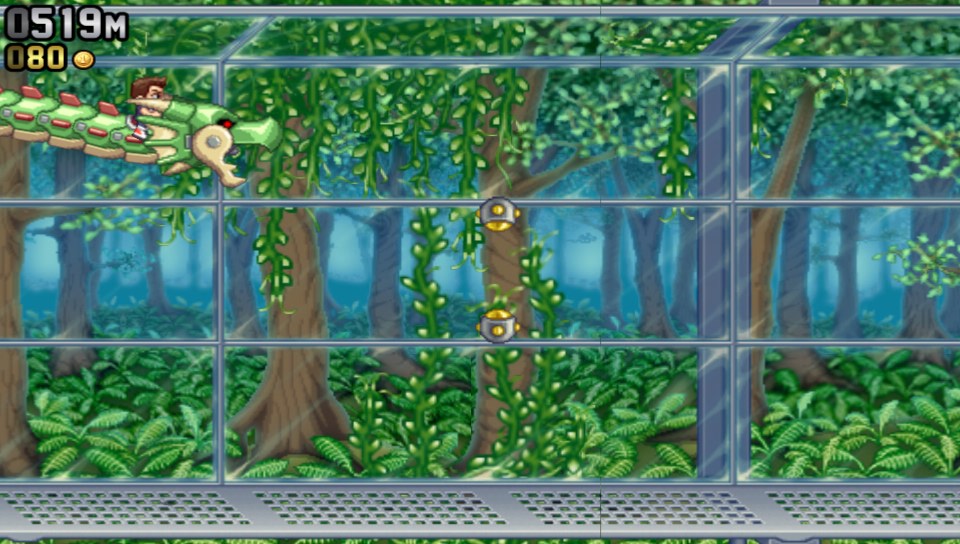 Every version has awards that you can collect during gameplay that are unlocked for completing tasks in addition to the main missions that you are set throughout the game and these are identical no matter what version of the game you play. However both the PS3 and PS Vita version of the game also include Trophy support meaning that there are even more goals to work towards beyond those particular targets should you strive to beat everything the game wants to throw at you.

This is something that I was rather surprised about and relunctantly means I have had to return to this feature and update it. I play all versions of this game regularly. It is one of those games that is incredibly addictive and because of the random nature of the missions, each version is addictive and is still a challenge to complete missions and rise through the levels. However, on extended play, the Android smartphone version has proved to be frustrating for all the wrong reasons. I found this version to be severely bugged to the point that it was unplayable. After a number of games I had purchased a gadget but on returning to the game a few hours later, despite this gadget still being active the game didn’t register as being purchased nor would it let me remove it unless I purchased and equipped another. Once that was done, the first could only be used if I re-bought it. And this ended up being the same case for every gadget I purchased in the game meaning that every coin I acquired was wasted. As you can imagine, the game was soon uninstalled.

Overall, there is no quick and simple answer. Each version has its own advantages and disadvantages over the others, but surprisingly, each format has managed to deliver an extremely competent and playable version of the game. Saying that, surprisingly the PSP Minis version of the game is sadly a rather pale imitation of all of it’s siblings, but even with the PSP being an ageing console, it should have been capable of producing an admirable conversion. It’s still a fun playable game but I was expecting more. The one that should be avoided completely, until the bugs are fixed is the version of the game running on Android smartphones however.

However, since the latest update has been released, there really is no question that the PS Vita is the definitive version of the game. It offers the best touch screen experience, offers button control making it a more than competent alternative to the PS3 version, has full social media integration, has more jetpacks and clothing available to purchase than other versions of the game, and if that wasn’t enough it also has the additional Trophy support. The only downside to this version is the slightly higher price for coins from the PSN Store.

If you want to play the game on the move, then the PlayStation Vita provides gamers with the definitive mobile version of Jetpack Joyride and I’d actually go as far as saying that this is even a better option than playing online or a PS3 so rather than playing it on a larger screen on a PC or PS3, you’re better off getting your Vita and sticking to this instead. Not only has the PS Vita has managed to hold its own against the competition but it’s beaten them all hands down including its own big brother.

This has been revised twice, following a re-evaluation of the Android version of the game, updates to the PSP Minis release and an update released for the PS Vita edition of the game. Last revised 3rd February 2013.