Ratalaika Games have become one of, if not the most prolific publisher on the PS Vita. Releasing a game almost every week they are porting an incredibly diverse range of indie PC titles from developers across the globe. Whether they are RPGs, puzzle games, platform or arcade titles, the publisher considers almost anything that may be of interest to console owners. Super Destronaut DX  is one such game that was added to their line up that made it to the PlayStation Store in the Summer of 2018…

Super Destronaut DX – In A Nutshell

Looking at the screenshots for Super Destronaut DX, your immediate thought would scream one thing… Space Invaders. It’s more than just a modern reworking of the old retro classic though. Instead of just a lick of paint, and modern sound, Super Destronaut DX has been completely reworked from the ground up. So much so, that apart from the opening visuals, there’s very little left in common with Taito’s classic 1978 coin-op.

In fact, the game has been stripped back to basics. Apart from the core left, right, shoot mechanics and a main UFO target to shoot, very little remains the same. So what’s different from the game that is its obvious source of inspiration? 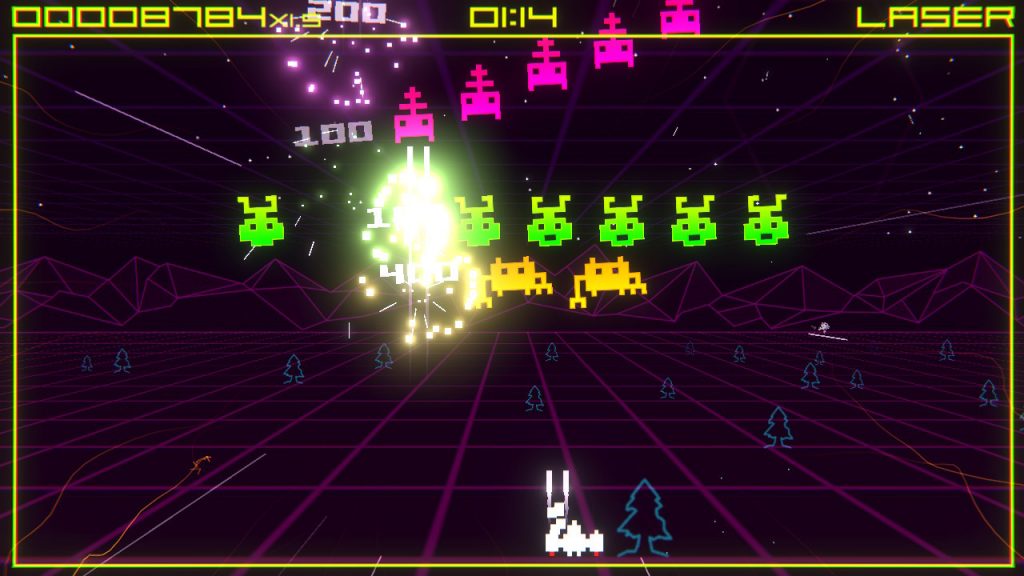 The core gameplay looks the same as Space Invaders at first. A grid of aliens at the top and a turret style weapon at the bottom that is limited to left/right movement. Aliens are destroyed by shooting, some needing multiple shots to destroy them. But that’s where the similarities end. Here you can fire off shots rapidly, removing the strategic element from the Taito original. Instead, this is replaced with faster-paced frantic arcade action. There are several distinct types of aliens, each with their own specific  types of weaponry that they unleash on you. Not all of them appear on each level so you don’t always know what you are up against and the attack waves are randomly created.

Some waves also feature a larger UFO as part of the grouping. These take more hits to destroy but once you do, it provides you with a power-up. These only last briefly but give you a range of different weapons to help you along including homing missiles, extra shots, and more. As an added bonus, for the first few seconds after collecting them the game is slowed down giving you a little time to relax and get your breath back! Finally, there are the greys. Shaped like certain characters from a certain old arcade game, these float down in the background and need to be avoided at all costs. Points are earned from shooting them but they are almost impossible to destroy. 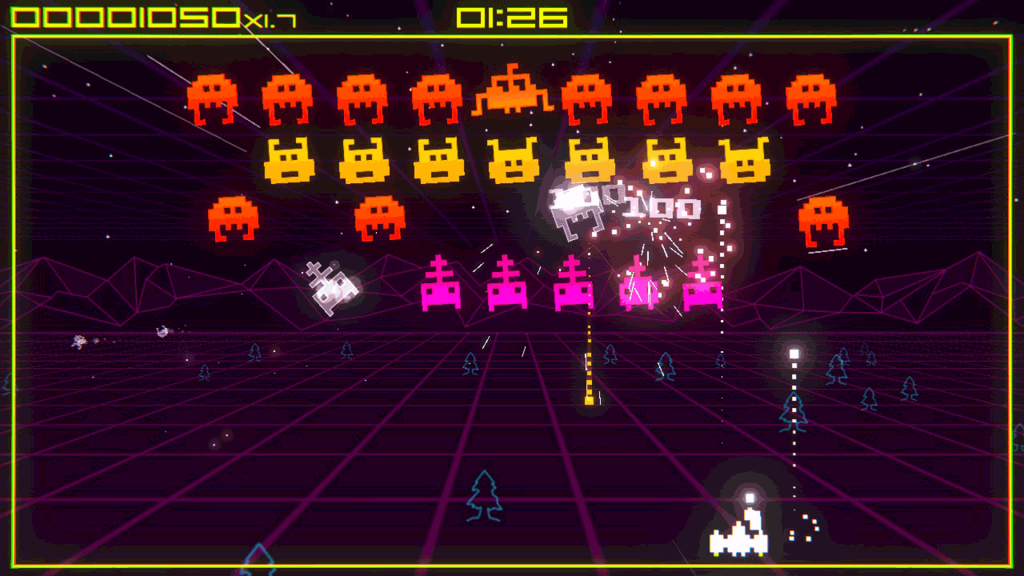 There are four main game modes on offer in Super Destronaut DX. Classic Mode gives you three lives and you simply have to clear as many levels as you can. It’s arcade action in its purest form where the main objective is to keep beating your personal best score. Challenge Mode is more interesting. 30 different challenges are presented to the player that need to be completed. You still have three lives at your disposal but the challenges are incredibly varied. From reaching a target score, clearing a set number of levels, acquiring a predetermined number of power-ups… Each is different to the one before it providing an incredible amount of diversity.

Time Attack is next and this is a non stop score mode. Here you have an unlimited number of lives and just 90 seconds to get as many points as possible. Finally is the Hardcore Mode. This is for those of you who think you have a chance at providing how good you really are. No time limits, just one life and you have to play the game normally and last as long as you can!

Visually, this feels like a game that could have come straight from Llamasoft with its neon-infused, bold and bright graphics. From the vector backgrounds reminiscent of early 80s Atari classics to the main in-your-face graphics of the main game, it’s not something you will forget. Sometimes there can be so much on screen at once that it can be hard to concentrate but that only came with the territory back in the 80s and 90s. Each weapon fired at you is colour coded depending on its effect and is matched to the alien that fires it which I thought was a great touch. After the first few games you’ll soon learn these so you’ll be able to prepare yourself for what is coming on each level. 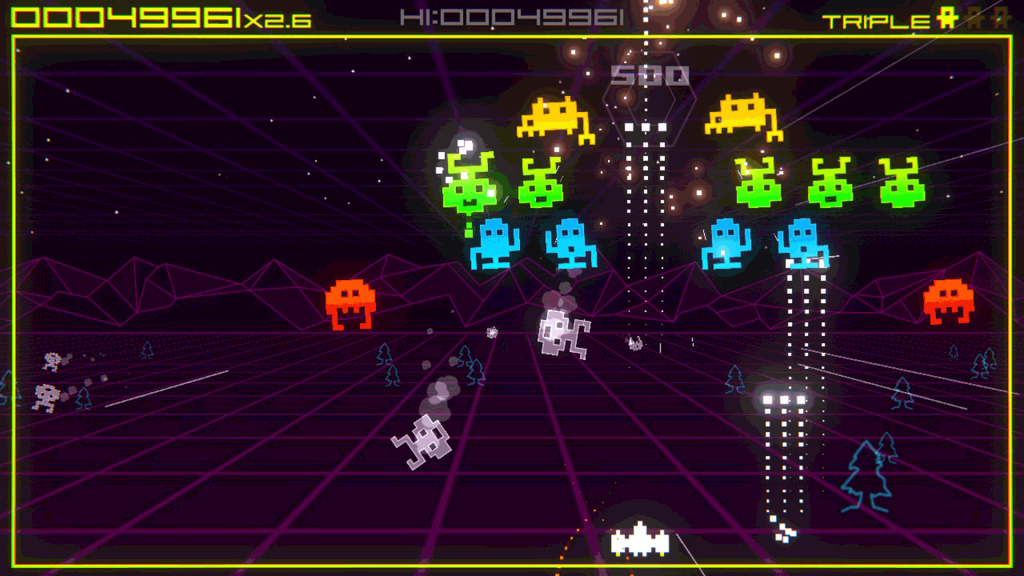 But the million dollar question is whether or not Super Destronaut DX is any good? All of the addictive qualities that made Space Invaders a classic are still here but increasing the pace has intensified the gameplay. There’s enough action to satisfy arcade junkies in the Classic Mode to keep most gamers happy. Controls feel responsive and the only time you may be frustrated are when the greys appear on screen. Occasionally these appear next to smaller non-interactive greys that are just part of the background making them hard to distinguish from one another.

One final point and I don’t know if you would consider this a downside or not… For those of you who are obsessed with trophy hunting, the Platinum for Super Destronaut DX can be obtained in around 30 minutes. If you are the type of gamer who wants to get trophies as quickly as possible then it’s a great way to boost your collection quickly and easily. But for those of you expecting a long term challenge then you won’t find that here.

As with all Ratalaika releases, this is on sale for a pocket-money price of just £3.99. For that you get not only the PS Vita version but the PS4 as well with the game being a Cross Buy title. At that price it’s exceptional value for money. And is a fairly cheap deal for the trophy hunters out there too! As a retro-styled arcade game it might not be meant for longer gaming sessions, but it’s ideal for a quick adrenaline fix. This is suited perfectly for the Vita and gaming on the go in particular, it’s one you don’t want to miss.

A physical version of the game, Super Destronaut DX Intruders Edition, was released by Eastasiasoft. This contained additional challenges, new game modes and new music. It was limited to a production run of just 1,000 copies but this has now sold out worldwide.