There are times when games receive so much exposure and publicity prior to launch that developers are placed under an incredible amount of pressure when it comes to releasing the final game. In the end, if the finished game that they release is nothing short of perfection they seem to be universally slated by the media. In other cases, games receive so much pre-launch attention that many are swept along with the media machine to the extent that no matter what the quality of the finished product is, it almost becomes akin to the emperor’s new clothes and no-one wants to admit that the game isn’t quite what they hoped it would be.

So along came the Vita port of Proteus. A much hyped indie release for the PC and brought to the PS Vita and PS3 by Curve Digital, it isn’t so much a game by traditional standards. This is one of the most unique titles I have seen in recent years and one that is hard to sum up and certainly hard to look at compared with other titles I’ve reviewed for Vita Player and I wasn’t quite sure what to expect from this exploration title…

In essence, Proteus strands the player on an island. No instructions, no set objectives, no enemies to hunt down… nothing at all. Taking on a first person viewpoint, you’re left on your own devices to explore the island as you see fit, seeing whatever creatures roam the land, any mysteries the island may reveal to you, basking in the sun, watching the sunset and continuing to explore in the moonlight as the stars fill the sky… and to be honest that’s pretty much it.

Controlling Proteus is simplicity itself. The left analogue stick moves you around the island, the right stick allows you to look around and the X button sits… yes, you sit down and do nothing and just watch the world go by. The Vita’s motion sensors *can* be used to control the view but I found that the right stick functioned more effectively. The only other controls the game have are the circle button to open and close your eyes (honestly!), the right shoulder button to take a photo and save it to the postcard gallery, and touching the screen to interactive with your environment (although opportunities to do so seem to be few and far between).

And that’s where the real crux lies – the main thrust of Proteus revolves around you wandering around doing pretty much nothing and just looking at mile after mile of virtual scenery, interrupted by the odd building or creature making strange noises as you wander past them. Your travels may be broken up by bad weather disrupting your visibility (to the extent that the retro-styled visuals become a jumbled mess on screen) but apart from the mysteries that are hidden around the islands to uncover, there’s no incentive to explore. I’m aware that this isn’t supposed to be a game in the traditional sense, but there has to be something there to be engaging and despite the soundtrack I never felt drawn into the world created here.

Part of the hype surrounding Proteus is that the islands themselves are procedurally generated creating not only a new experience each time you visit but also – thanks to the Vita’s GPS, one that is tailored to your own location and even factors in the date to create something that is unique to every Vita owner and even two islands created on the same day would be completely different but being brutally honest, no matter how unique they were in design and no matter how many islands I visited in my time with Proteus, they all had one thing in common – they all offered me nothing in terms of an enjoyable experience on the Vita (or the PS3 for that matter) and I felt that my time had been wasted afterwards.

If I really wanted to explore forests, mountains and any sort of open landscape all I need to do is open my front door and take a walk through the natural scenery that surrounds where I live. I’m fortunate enough to live in a wonderfully secluded part of South Wales that is surrounded by natural beauty and when I look around where I live, as you can see in the photo here, and then look at what Proteus is trying to offer as a game I really wonder just what the developers were trying to achieve. 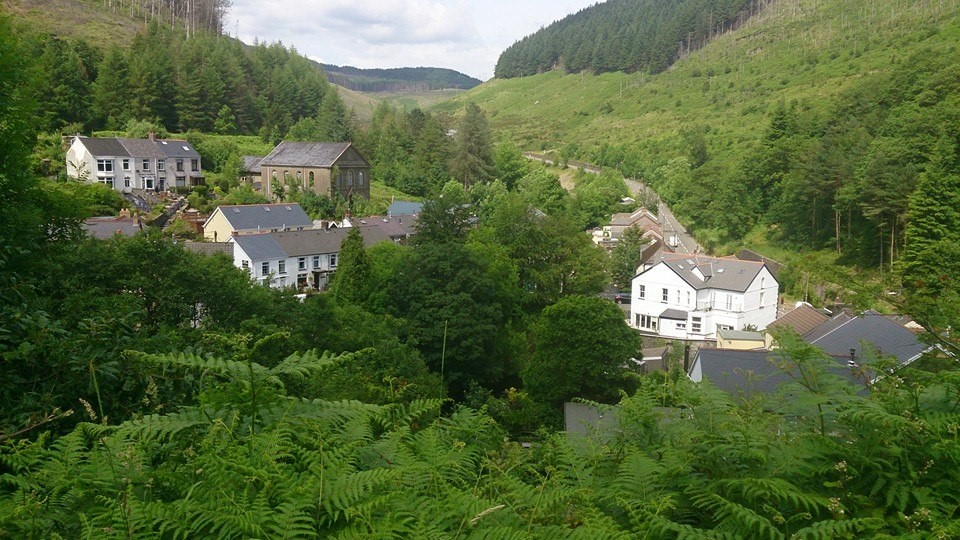 Visually the game presents itself with a rather 8-bit retro feel with a very pixelised look, albeit a rather colourful one. The transitional effect of the lighting from day to night and back again works extremely well as the entire landscape changes altering the entire mood of your surroundings and the sporadic weather effects work reasonable well, but you’re left wondering throughout why such a simplistic approach was taken to the visuals. Even with such a randomised approach to the games design, it can look cluttered at times and hard to distinguish one thing from another when exploring the landscape you have created.

Sound is sparse but for an empty world this is to be expected. A relaxing, ambient soundtrack plays throughout along with sporadic natural sound effects broken up with noises from the creatures that you encounter on your travels. There’s nothing really that stands out but as with the visuals many of the sound effects have a certain 8-bit feel to them.

Normally I don’t mention Trophies in games because to be frank they’re something that don’t particularly interest me but in this case it’s something that I felt was worthy of a mention. While wandering around one of the islands I earned a Trophy simply by wandering into some form of weather vortex that I became trapped in for a brief period of time – I didn’t actually do anything… it just happened. Another Trophy can be “earned” by walking to the top of a mountain, sitting down and waiting. Yes, again you earn a Trophy by doing nothing. Even the most hardened of Trophy hunters have found this aspect of Proteus monotonous but have just found themselves going through the motions to boost their virtual trophy cabinet.

The fact that this offers Cross Buy and Cross Save isn’t really much of a bonus – when something is this dull, why would you want to own it twice, let alone experience it continually on more than one system? Playing this even briefly one one of your PlayStation consoles would be more than enough for anyone and I can’t imagine why anyone would want to extend this on the move.

I really can’t comprehend Proteus at all and why it has been received so warmly on the PC, PS3, Vita or any other platforms it has been released on. It’s a mind-numbing experience and one that induces boredom from start to finish and is something that you’ll find no longevity in whatsoever. Other than limited novelty value of exploring for a few minutes just to see what is actually on the islands created, you’ll find no appeal in Proteus at all. Instead of spending any money on this, find your nearest tourist information bureau and visit somewhere locally instead and spend some time exploring some real sights. It will be money far better spent and you’ll feel all the better for it.

One of the biggest disappointments so far from the indie scene to hit the Vita.