Growing up in the formative days of the video games industry really helped me gain an appreciation of the importance of gameplay over aesthetics and I was brought up in an era where games didn’t need protracted storylines to be good – something that a lot of developers (and gamers) have lost in recent years. To me, I’d rather play a game with simplistic gameplay mechanics and something that can be picked up and played with little need to refer to a 100-page manual before you can understand how to play it and something that can be mastered and enjoyed by players of all ages.

It’s no wonder then that I’m drawn more to retro gaming and those that have been inspired by or are based on games I enjoyed as a child and that’s what immediately lured me to Platypus. The first thing that hits you when loading Platypus are its graphics. Now I know I mentioned at the start that visuals aren’t important in a game, but in this instance it’s the graphics that became the main selling point of Platypus ahead of its playability or anything else and if I am completely honest it was its unique look that drew me to it in the first place.

I was never really a huge gamer when it came to the PC. Granted, I picked up as many Star Trek and Star Wars titles as I could but other than that it was pretty limited. I was old school and my interest was only really grabbed by the occasional retro-inspired arcade game and that’s when I spotted Platypus. I’d already bought some digital games before through a few of the larger distributors and then this came along. It was nothing like anything I’d seen before. Developer Anthony Flack had taken the tried and tested side-scrolling shoot-em-up genre and added something genuinely new to it. All of the graphics were constructed from clay models. Even if the game was going to be an average shooter, I knew that I had to try it to see if it was any good… 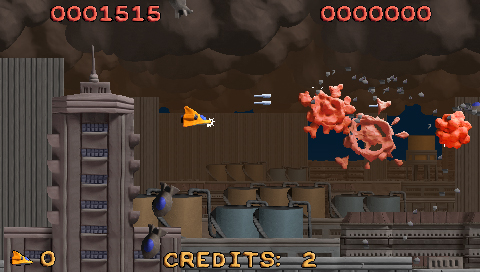 I won’t go into all of the ins and outs surrounding the game and its distribution as there is a rather sad tale behind. Beind quite a young developer at the time, Anthony sold the game and all rights to it completely to the publisher and it’s sales and success have made the publisher and subsequent re-sellers a substantial amount of money while Anthony… let’s just say not so much and his career in the industry has been a lot more limited.

But back to Platypus… It’s a basic bullet hell shooter and there’s no plot to speak of – shoot everything that moves, get to the end of each stage, progress to the next, defeat the boss at the end of each world and move onto the next. Powerups are provided by destroying complete waves of specific craft that attack you during the game. Doing so will drop a coloured star. Collecting this will give you 20 second useage of a new weapon which can be anything from missiles to three-way fire or a high velocity cannon. Shooting the star will cycle it through different weapons and collecting more stars will extend the time available. Once that time runs out it’s back to your basic gun. Things start easily enough but the action picks up to quite a frantic level as you’re assaulted from all angles with everything on screen firing at you and swarming all over you spewing plasticine bullet hell from all sides giving even the most hardened gamer a real challenge.

Despite its small screen, the PSP version holds up remarkably well compared to the PC original and the graphics still look superb. Every detail – from the hand-moulded background, the ship, the explosions… every last detail still looks superb and moves at a blinding pace with no slowdown although as you’d expect there’s some blurring but that’s more of a technical issue because of the PSPs LCD screen rather than anything else.

Article supported by http://www.canadianwebhosts.info – the number one comparison site for web hosting in Canada.

Apart from the graphics, one thing that may strike a lot of gamers is the soundtrack as well. Instead of having music composed especially for the game, all of the music here has been licenced, presumably to keep the budget down but in this case it works brilliantly and for me was another highlight of the game. All of the tracks featured are modern re-workings of tracks taken from Commodore 64 games, licensed from albums released by C64audio.com. Composed by some of the true greats on the Commodore 64 including Martin Galway and Rob Hubbard, this really is a superb soundtrack and for me is the best part of Platypus.

Having focused on the PS Vita as my primary console for the last five years or so, going back to the PSP was strange and it did take a little while to adjust to the controls here. While it can use both the d-pad and the analogue thumb stick, analogue is the most responsive of the two and gives you much better control over the game. Sorry but d-pads just weren’t designed for arcade shoot-em-ups!

This is a great game but sadly it does have a couple of minor flaws that stop it from being an essential purchase. With such a great soundtrack it’s a glaring omission in the options page to be able to have at least some form of volume controls for the music and sound effects. As it is, the only option offered is whether or not to have the music on or off. When action is quite frantic on screen and player bullets are flying around the screen, the sound effects drown out the wonderful score and it almost makes you wonder why the publishers spent money on licensing music that can’t be heard. 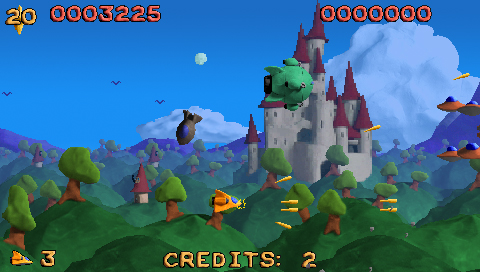 The controls aren’t quite as responsive as I remember them to be as well. Maybe I’m used to playing games with the Vita’s analogue sticks now or it’s superior d-pad but it simply doesn’t “feel” as easy to handle as it should do and during play you feel more often than not that you lose lives because of frustration with the controls rather than your own ineptitude. As good as the analogue control is, it’s not quite as good as it could be but maybe I’m being harsh on what is really a design issue with the PSPs hardware rather than the game itself.

It’s still a fun shoot-em-up, looks great and will certainly provide you with a big challenge to keep you coming back for more. The ability to start at any stage that you’ve unlocked is an added bonus so you don’t have to fight through the early ones if you don’t want helps to prolong the game and cut out unnecessary frustration for those who struggled to get to later levels in the first place!

Sadly this was only released in the US as a physical UMD so you might need to hunt around to find a copy, but it’s worth a look.