The entertainment industry has had a tough time of late. It’s been working frantically across all outlets – television, movies, comics and video games – to reinvent itself when it’s come to zombies. Let’s be frank, the world is beginning to tire of the undead. We’ve had an endless tirade of movies, books, television shows and video games all based on the same tired format for years now and very little comes along that attempts to bring anything new to the table.

It’s the same with gaming – we’ve seen countless genres that have been flooded with titles that were carbon copies of each other in terms of look and feel to the point that games blended into one another and after so many games in the same series being released or of the same type, can we really tell what we’re playing any more? That’s really how I was left feeling coming away from playing #KillAllZombies, the latest game centred around everyone’s favourite lifeless characters from SPL… 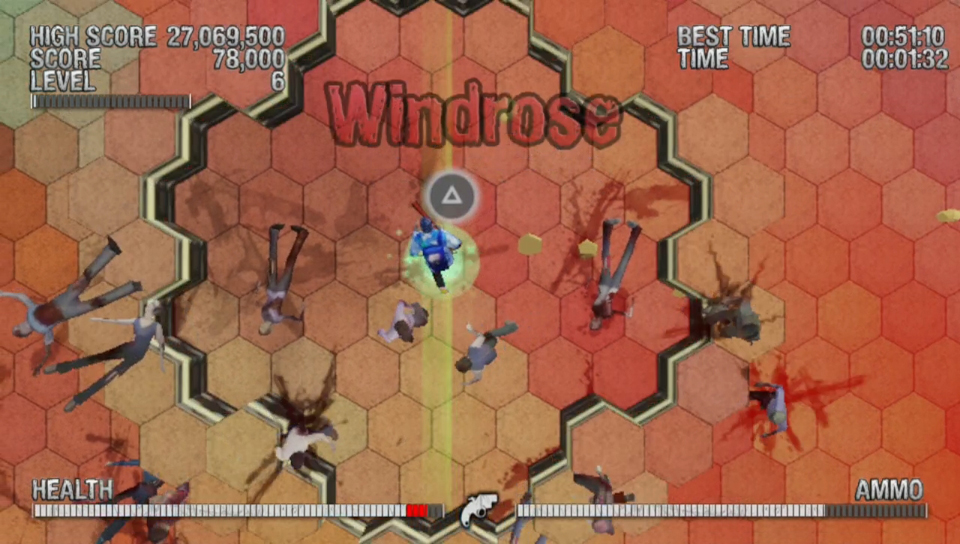 The concept behind the game is pretty simple. It’s you against the zombies (unsurprisingly) and you simply have to survive. There are two game modes but each centre around the same core gameplay. Essentially #KillAllZombies is a top-down twin-stick shooter pitting you against a never-ending swathe of the undead while you find yourself trapped in an enclosed arena (now getting trapped there is a bit silly really… they’re not even that dumb on The Walking Dead!). Controls are simple enough as you’d expect using the left stick to move and the right stick to aim/shoot with a few additional controls depending on which of the two game modes you decide to play.

Survival is first and as its name implies you just have to last as long as you can against the zombies. You come under attack from ever increasing numbers, in more varied and stronger waves as the game progresses with bigger and tougher types of zombies. You start out with a single weapon at your disposal (selectable by running over a weapon pod at the start of the game) but you’re able to pick up more as play progresses. Weapon pods are dropped into the arena at random as you play so you can change guns, each having their own strengths and weaknesses for fire rate, damage and reload time although fortunately you have unlimited ammo regardless of what you use. 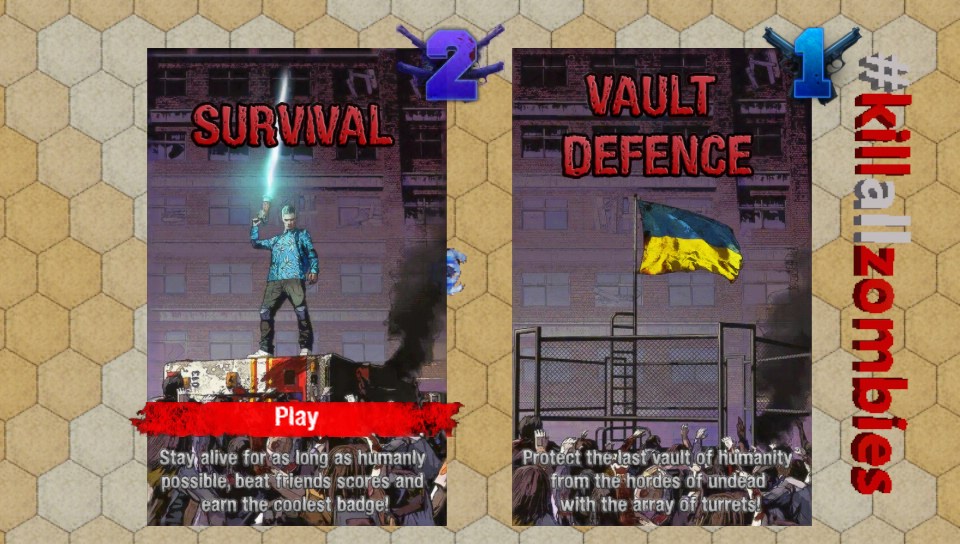 Where things are a little different are the “perks” available for you to use during play. Approximately every 30 seconds you can press the triangle button and it brings up and on-screen menu giving you the choice of four bonuses you can bring into play. These are chosen at random from about a hundred on offer including health boosts, weapon damage supplements, invincibility, even changing the arena itself amongst countless others. Each have time limits for their use but most of them can be real life-savers.

Additional supplies – weapons and first aid – can be obtained from giant containers that drop from the sky periodically during the game. These cargo contains fall without warning so you need to make sure you’re not in their way or it’s one squished player and game over! To open these you have to shoot them repeatedly until the explode (taking out all the nearby undead with them in the process) and then gather whatever goodies they have left behind. That’s pretty much it to be honest. Shoot, run, kill, survive, and use perks ad infinitum until you run out of health then do it all over again when (or if) you decide to start again. Being completely honest, that was my problem playing this aspect of the game – despite wanting to see what the game really had to offer and to see what surprises it might had had up its sleeve for me, there were none. Despite persevering for several hours with the Survival mode it felt as if I was making no progress with the game and that I was playing the same short chunk of game over and over again. 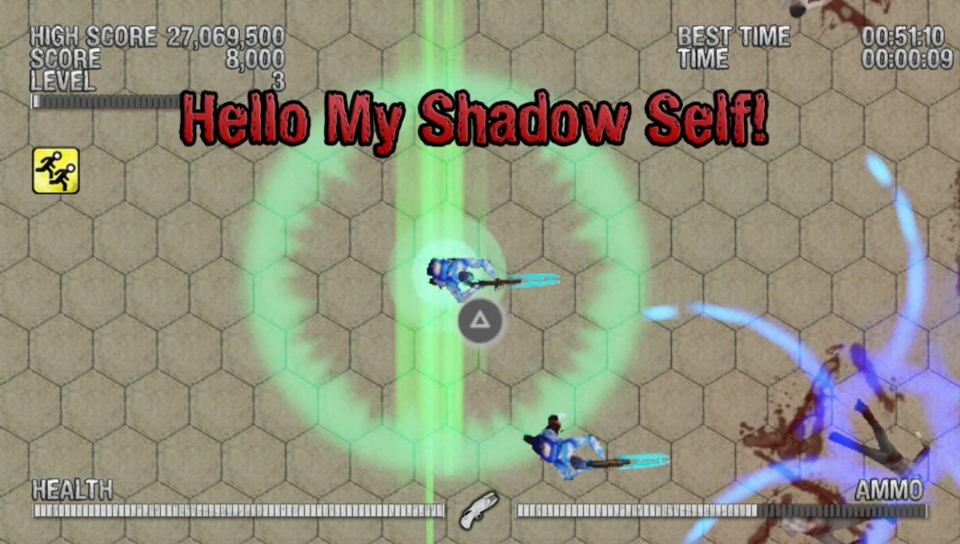 Even the levelling up system for the character didn’t do anything to help address the monotony either (you level up each time you kill a set number of zombies). In all the time I spent playing the game, it seemed to have no bearing on the character or the game itself, just the score at the end of the game.

Vault Defence is the second game mode and this is a cross between a very basic Tower Defence game and the previous Survival mode. In the centre of the arena is an enclosed vault that you have to protect. You have a small amount of cash that allows you to buy gun turrets and pressing the square button will use some of these funds to buy and place one where your current position is. Money is earned as you kill zombies so using a combination of your own weapons and the turrets you have to defend the vault at all costs. Once your own health runs out or the zombies do enough damage to the vault (which is linked directly to your health) then it’s game over.

Visually the game is average at best. Even when the action is frantic there’s no slowdown thankfully, something that games like this can be prone to regardless of the format they are on so I am least thankful for that, but everything seems bland and uninspiring. There are plenty of grunts and groans from the zombies but the weapon sound effects seem somewhat subdued and lack any real impact and the same with the visual effects. Even when using a shotgun on a horde of zombies, there’s very little in the way of bodily carnage. No, this game isn’t meant to be the latest chapter in the Dawn Of The Dead saga, but while there’s a little blood splatter with each zombie death it’s more fly swatting than eradication of the undead. 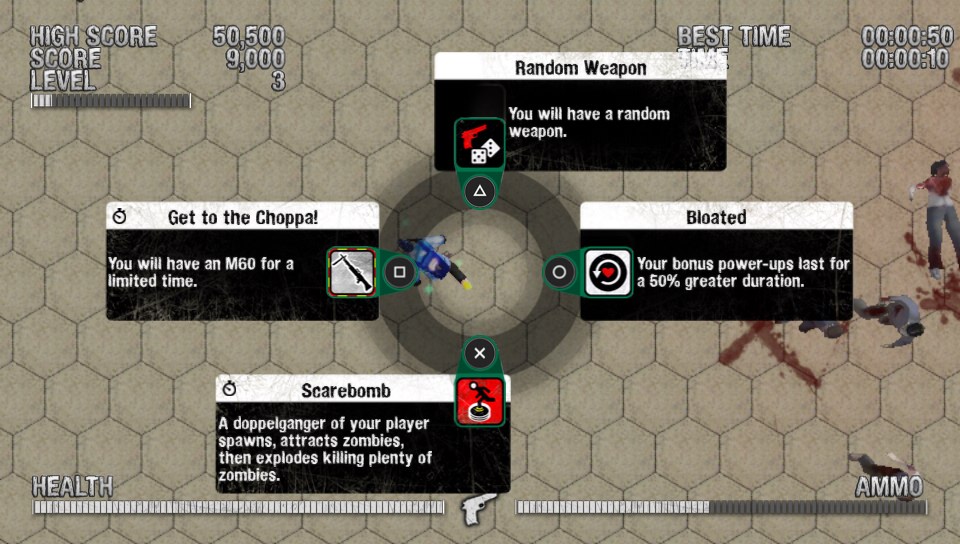 All the time I’m talking about this I’ve tried not to make references to other games on the PS Vita but it’s hard not to. While this is one of the most affordable zombie releases, it’s certainly not as polished, as deep or engaging as something like Dead Nation and for me that offers a much better gaming experience on every level. And despite its simplicity, I even found myself yearning to play OMG Zombies instead of this.

At the end of the day, #KillAllZombies is fun in its own way, but it’s far too short-lived. It’s certainly not a game that can hold your attention for long periods of time and gets repetitive very quickly. Sadly it really just doesn’t offer anything long term for Vita owners that other games out there haven’t done better and I think that’s its biggest failing. It’s nothing that we haven’t seen before. Decidedly average.