One thing I love about the PS Vita and the indie games scene is that every so often games appear out of nowhere that we simply had no idea were coming out. It’s great knowing months in advance of all the games that we have to look forward to, but a few surprises here and there makes being a Vita owner all the more wonderful and just shows how much love is really out there for the console. Dungeon Punks is one such game. While it was mentioned back in April, and even the official PlayStation Blog talked about it, there was no talk about the PS Vita version so imagine our surprise when we were contacted about it last week to see if we wanted to review the game on behalf of developers Hyper Awesome Entertainment.

Mercenaries. Don’t you just love them? Well, that’s what you are in Dungeon Punks. More specifically, you take charge of a band of them made up of all manner of strange creatures looking for fame, fortune and willing to take on almost any job as long as it pays enough, sailing the high seas, fighting your way through any creature that happens to stray into your path, rescuing maidens along the way… okay, forget that last bit, but you get the idea. 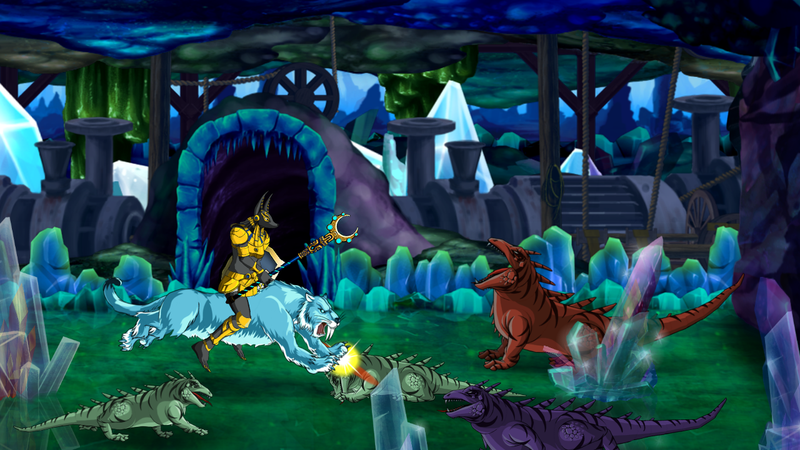 On first glance at the screenshots, Dungeon Punks looks like a typical side-scrolling hack-and-slash game, akin to the PS Vita classic Dragon’s Crown with it’s large characters and fantasy setting and in some respects it does share some traits with that title. At the start you choose your initial party of three characters from six different species available, each with their own strengths and weaknesses and once your’re ready to start the game you are thrown straight into the action. What follows is side-scrolling action somewhat akin to the Sega classic Golden Axe but with three characters fighting on screen simultaneously as part of your team. Defeat all of your adversaries on the screen and it moves forward, just like all the arcade classics of the 80s and 90s.

As you defeat your opponents, you build up mana and as this grows your characters are able to unleash various magical attacks that increase in strength throughout the game. You start with a limited number of these but can learn more later. You’re not just mercenaries though – you’re also a rather unrelenting group of scavengers and you’re quite happy to collect anything left behind from your foes as they fall to the ground. Money, health potions and even weapons – you don’t care as long as it’s something you find useful. 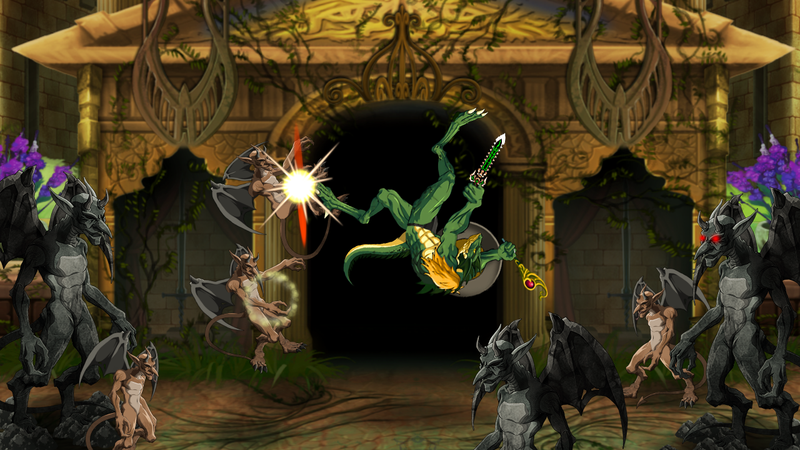 Get to the end of each level and you face off against the inevitable boss and once you have beaten them you return to a ship that belongs to the captain who has hired you. Each character used will gain experience points and earn small increases in all of their character statistics (essential to tackle some of the later levels when more health is needed to survive). From here you can spend points to learn new magical abilities, buy new weapons, recruit new mercenaries and head off on your next mission.

Sounds pretty formulaic at this point and very reminiscent of Dragon’s Crown. It would be if it weren’t for one major difference. Dungeon Punks is the first game of this kind that I know of (and someone may correct me on this) to offer tag-team action! Once you have enough characters at your disposal, prior to starting each mission you can select the character you take into battle but you can also select a second character to control before choosing your other support characters. If at any point your character’s health is running low (or if you want to activate the special tag-combo moves) just tap the circle button and your two characters swap over. It’s a fantastic concept, executed perfectly and helps you get out of really tight spots when your back is up against the wall.

Death is still inevitable for some of your characters though, and this is where the malevolent RezCorp organisation come in… as you try to unlock the dark secrets behind this company, they play a part in your adventure throughout as they control every part of the resurrection insurance industry so the chances are you’ll be dependent on their services on more than a few occasions – just make sure you have the spare gold to be able to afford them! 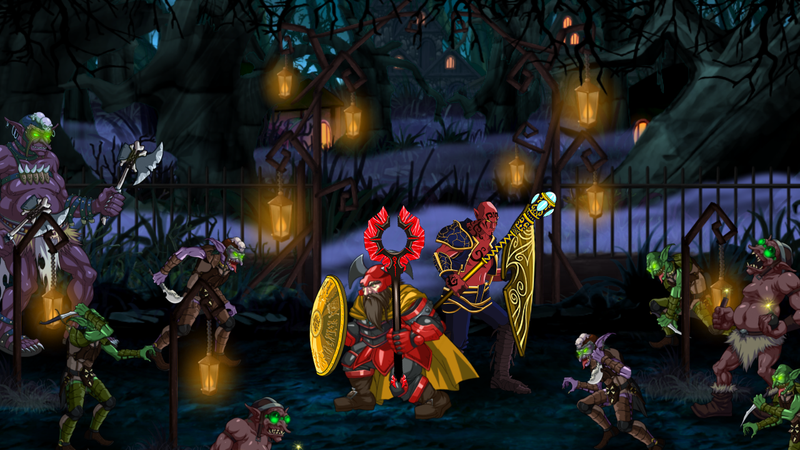 As you’d expect, for the most part Dungeon Punks is nothing new. hack and slash your way through the levels, buy and upgrade weaponry and hope you can survive the onslaught thrown at you. The RPG elements do add greater depth to the gameplay, as does the tag-team element and that’s where the core gameplay really comes to life. To be honest this is probably it’s greatest strength as the story itself is somewhat clichéd and the intended humour in the dialogue just doesn’t quite work for me and really hinders the game rather than enhances it as it should do. In a game like this, the story should either be minimalistic so you have just enough of a reason to get stuck into the gameplay, or it should be a powerful tale to draw you into a rich tale, filling your heart with a desire for adventure and it just doesn’t manage to accomplish that.

That doesn’t stop it from being a fun arcade romp – far from it – but I was left with the feeling that it could have been so much more, at least from the story telling side of things. With the story itself, everything progressed by way of a motion comic style presentation with all of the dialogue displayed on screen as text only. In fact there was no speech at all in the game and sound generally was quite lacklustre with a monotonous soundtrack and average sound effects throughout.

Onto the visuals and the game looks bold and colourful with the characters and cut scenes all appearing to be extremely well illustrated although I was quite surprised at the relatively limited amount of animation on the characters during the game itself. Again this felt like a throwback to the 90s arcade classics so I was left with mixed emotions here. Personally the limited animation didn’t bother me too much although I know there will be some who will find it a major annoyance. 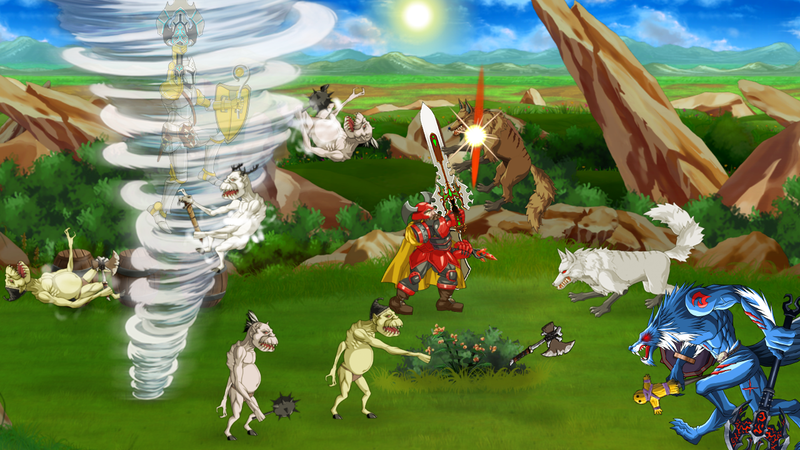 Apart from the odd niggling issue with the game, all is generally fine up to this point and apart from the frustrating inability to jump I did enjoy playing the game, even if each of the levels and some of the side quests assigned to your team as you progress seemed to be quite similar to each other and followed the general format of walk, attack, defeat boss and repeat.

Also, in the early stages of the game you’re almost certainly going to need to go back and replay stages to build your characters (and funds) up and while this is certainly no bad thing, at the end of each stage once the boss is defeated the game plays back the same end of story sequence that it does the first time you complete it. It’s a minor quibble but it is frustrating having to sit through the same sequence (that can’t be skipped) every time you want to go for a quick grinding session. What is more frustrating here is that the story for the first level is a major scene-setter for the remainder of the game and it really breaks the flow of the gameplay having to sit through it repeatedly.

At the same time, while you progress through the story as it is displayed on screen or navigate the in-game menus, there’s an incredibly irritating tone that plays every time the X button is pressed and there doesn’t appear to be any way to turn it off. There’s no need for it to be there and it very quickly grates.

However, I’ve missed out something quite important about Dungeon Punks that I’ve kept quiet about until now… here at Vita Player we’ve been quite passionate advocates for the much-maligned PlayStation TV and it seems as if we’re not the only ones who love the microconsoles. Dungeon Punks is not only compatible with it, but is dramatically enhanced for the console. I mentioned before that your party is made up of three characters. The PSTV takes the game to a whole new level as you can grab your friends around the telly, break out the extra controllers and using the multiplayer support of the PlayStation TV have up to three people playing simultaneously, each controlling a different character.

It doesn’t stop there though as PSTV owners are treated to an extra game mode all to themselves. In Joust Mode, players battle out against each other in fixed combat arenas over a fixed number of rounds. The challenge is simple – defeat your opponent before they defeat you. To help (or hinder) you, the arena is also filled with all manner of extra creatures you can used tactically to help in your assault.

I’ve seen games take advantage of the PSTV before, either with multiplayer support or remapping controls to make use of the extra buttons on the DualShock 3 or DualShock 4, but I have to be honest and say that this is one of the most impressive enhancements I have seen yet for the console. The developers really have gone the extra mile here and I have to applaud them for it.

Ultimately while this game isn’t going to win any awards for its depth or complexity, it’s still a fun and entertaining title. With Cross Buy support with the PS4 and truly stunning PSTV enhancement it makes Dungeon Punks a must-buy game for PlayStation TV owners and solid fun for fans of old-school arcade games everywhere.