The PS Vita is home to some truly standout indie titles that have made the leap from PC and console to our favourite little handheld, with aplomb. More often than not, the Vita is the perfect place to play these games, not only by virtue of its portability — sure, that’s a very big part of it — but, also because those dual analogue sticks feel so damn great, and that screen looks bloody gorgeous to boot.

The latest indie game to make the crossover is Darkest Dungeon, available via cross-buy and cross-play on both PS4 and PS Vita respectively, and I’m absolutely over-the-moon to share my thoughts about it as it’s something very, very special indeed.

Darkest Dungeon is a gothic RPG rogue-like dungeon-crawler that focuses upon the psychological stresses that crop up when adventuring through the monster-infested darkness. It’s a theme that is often overlooked in games — surely, slicing and dicing through swathes of beasts, within the darkness of the unknown, while your comrades fall by your side — well, no doubt that would weigh heavily upon even the bravest of minds. Even Chuck Norris must have nightmares. Maybe.

Those of you who are familiar with Dungeons & Dragons, HeroQuest or any old-school, table-top fantasy boardgames will feel right at home here, particularly if your Dungeon Master was a masochistic bastard who enjoyed party-wiping all your characters with fervent glee. If your one of those, like me, who remember your amiable characters dying so much that you had to start putting roman numerals at the end of their names to save time at character creation, a ‘la Hudson the Dwarf IV or Bones the Barbarian VII, you will be in nine-sided-die heaven with Darkest Dungeon.

The game’s narrative begins promptly with you, the player, having inherited a grand, illustrious estate from your mad, old uncle. In his search for riches, knowledge and fame your maniacal ancestor excavated the ruined catacombs beneath the family estate only to unearth portals into evil alternate realities. The creatures of the darkness have poured out from these portals and are doing what monsters do best; causing unimaginable havoc and mayhem. So, doing what any rich caretaker worth his salt does, you hastily assemble a handful of well-armed ruffians to go down into the darkness and clear the evil from the dungeons below. 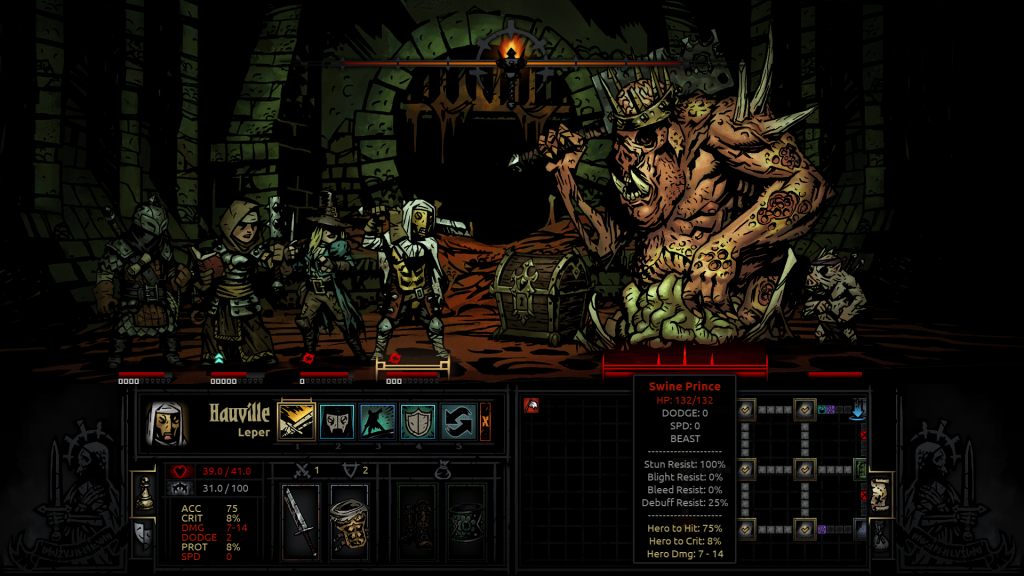 The Lovecraftian tale that developer Red Hook has weaved here is more of an atmospheric backdrop, than a fully fleshed out narrative. It’s a world brimming with character, despite the ironic fact that you don’t really get the opportunity to truly get to know any of the characters. Much of the dialogue from your ragtag bunch of adventurers are snippets of prose that is often recycled throughout your travels, mainly because these characters, more often than not, will meet their untimely demise before they can even really introduce themselves.

No, the true character here is the depraved, brutal world that Red Hook has created, which is fittingly narrated by the gruff, guttural voice of your raving lunatic of an ancestor. He is as close to a well developed character you’ll get in Darkest Dungeon.

Now, that would usually be a problem in most games. However, Darkest Dungeon is skilfully built around this morbid theme of consumption, of using something until it breaks and then just throwing it away. Every hopeless hero that arrives on the local stagecoach is merely a disposable dagger, an expendable axe, a superfluous healing spell, there to do its job until they’re dismissed, or their life has been extinguished. That’s not to say that you won’t grow fond of a smattering of heroes that are delivered to you. You’ll have to, however, learn to do a Princess Elsa and just “let it go”, particularly when your favourite Crusader is squashed by an oversized pig ogre boss.

There is such a diverse set of gameplay systems that synergise wonderfully within Darkest Dungeon, but the real challenge, and the real fun, is in learning all of them. Despite a straightforward tutorial dungeon that introduces the main mechanics within, many of the deeper systems are seemingly deliberately obfuscated. Honestly, it’s deep systems may well put off some players, but to others it will draw them to Darkest Dungeon like a moth to a shimmering torch.

So, what does the moment-moment gameplay entail? Well, you select four heroes at your home-base (more on this later) and choose a dungeon to delve into. Some are more difficult than others, and the more challenging levels unlock as your ragtag crew makes progress and levels up. 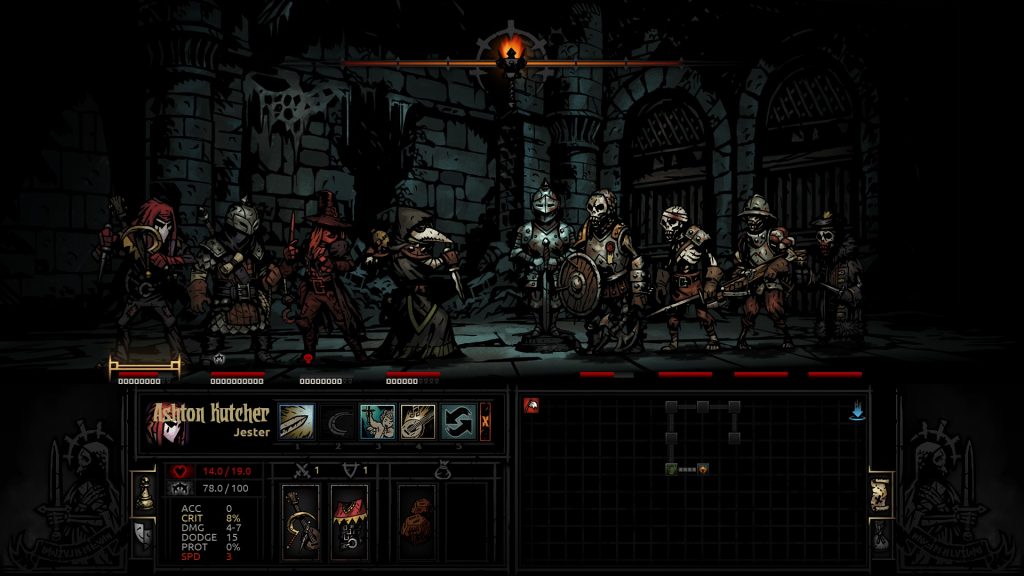 Combat is turn-based, though it blends a ton of neat flourishes into the mix to help keep things fresh and engaging. Positioning of your heroes is absolutely critical. Your most powerful hero could be a tank-like damage-dealer that excels in the frontal positions of your roster, however, they could easily be pushed to the back by some nasty tentacle beast only to become utterly useless until they have found their way back into position. Vis-a-vis, your fragile healer maybe pulled to the front of the battle only to be pummelled to death by a bevy of amphibious troglodytes. Luckily, most tactics that the enemies exploit can be turned upon them. Some classes, such as the Occultist, can hook the murderous swines that hide at the back of the enemy’s ranks and bring them into swinging range of your melee front-lines, which is super satisfying.

The next welcome twist the game brings to the table is its much touted stress system. You don’t just worry about HP within Darkest Dungeon, oh no sir, that would be way too easy! You will also encounter stress damage. A lot. Keeping your stress levels low and your HP high is absolutely crucial if you intend on making it through these dark, dangerous dungeons alive.

Unlike your HP bar, your stress meter fills up twice. When you fill up your stress meter initially, an invisible die is cast, which results in either a negative or positive quirk being applied to the character. Most of the time, you become afflicted with negative perks, however, it’s great when your character just steps up to the plate and gains a positive perk and activates a sort of hero mode. These instances can change the flow of battle considerably. Negative perks are numerous and can range from lowering a character’s bleed resistance, to lowering a hero’s damage output, to a hero outright missing turns within battle or refusing to be healed by fellow team-mates.

As you may expect, positive quirks can increase damage resistance, reduce overall stress and increase a character’s critical chance. It’s this feeling of yin and yang that really forms the central heart of Darkest Dungeon. It effectively marries the nostalgia of old-school RPGs with a more modern, strategic approach. When you fill up your stress meter twice, your adventurer suffers a heart attack and promptly bites the dust. Ouch. When heroes fall, however, there is always fresh meat to fill their battered shoes.

As you battle the hideous beasts, it quickly becomes clear that administering criticals is absolutely paramount to swinging the pendulum of battle in your favour. Delivering critical hits to enemies helps reduce the stress of your party, though concurrently, receiving debilitating criticals from enemies raises stress levels within your hero’s ranks. Thankfully, trinkets can be discovered and equipped that can raise buffs such as critical hit chance, amongst many other stat upgrades, which helps to give you the edge in battle. 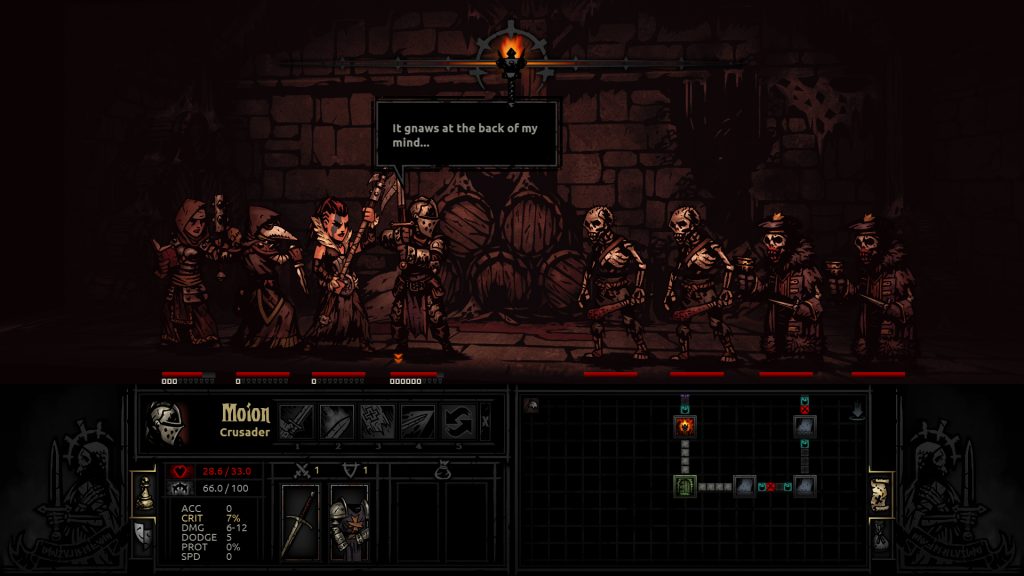 Light level is also an important mechanic that needs thought when delving into the dungeons. You can equip your adventurers with torches prior to your dungeoneering, but you can also discover torches on your travels. The lower the light level, the more dangerous the enemies become. On the plus side, loot is more abundant when the light level is low.

The hub world, referred to in-game as the Hamlet, is a place you’ll be spending a lot of your down-time between adventuring. There are a myriad of important things to do here. The Tavern and Abbey are useful for administering welcome stress relief to your motley crew of conscripts, whilst the Sanitarium is necessary to remove negative quirks and lock in positive quirks that function as either a curse or a boon. The Guild and Blacksmith are essential for upgrading combat skills, armour and weapons, which is key to increasing those critical hit chances and dodge percentages. There are so many things to do here, that you can often spend more time outfitting your party and resting them than actually delving into dungeons, though, it’s always engrossing and captivating as you build up your parties, customise your heroes and level up your Hamlet’s various support structures.

I can’t close out this review without mentioning the incredible art-style that Red Hook has pieced together here. It’s a sublime show-piece of artistic showmanship with beautifully bleak painterly Lovecraftian design. Every frame is a mesmerising glimpse into the darkness of Medieval, low-fantasy artistry. In essence, it’s a Dungeons & Dragons fan’s filthy, grimy nightmare come true.

The fantastic score is also wonderfully austere with strings of solace accompanying your visits to the Hamlet and tense, exhilarating symphonies invigorating your senses as you battle the monsters with Chess-like strategy.

Darkest Dungeon is a sublime tour-de-force. It’s a testament to how traditional design philosophies can be tweaked just enough to breathe new life into a tried-and-true formula. It masterfully synergises this formula with edge-of-your-seat, visceral gameplay and brings the whole package slap bang into the modern era with artistry, craftsmanship and thoughtful dexterity.

Even though it’ll continually kick your arse, batter you into submission and relentlessly destroy you, it’s hard not to flit towards it’s beautiful, hopeful, brutal licks of flame, especially when the darkness within it is just this damn fun.