When Battalion Commander arrived for review I have to admit that I wasn’t quite sure what to make of it. Knowing some of the games that I’d seen in the past from SPL and the nature of the company (SPL stands for Smartphone Labs which may give you a hint to the type of games to expect from them), I was a bit apprehensive. Early screenshots made the game look like the 90s Amiga classic Cannon Fodder but the gameplay… well that was something rather different…

I’ve played a number of games over the years from publishers where games have obviously been ports from mobile devices, other consoles etc and to be frank as long as they are good games in their own right I’m perfectly happy seeing these titles appear on the PS Vita. Even if a game was released as a 99p Android game, as long as it’s fun and playable and is released at a fair price on the Vita and makes use of at least some of what the Vita has to offer then I’m happy to give them a try. That being the case, before even playing Batallion Commander I wanted to try to find out a bit of its history before getting stuck into the game. 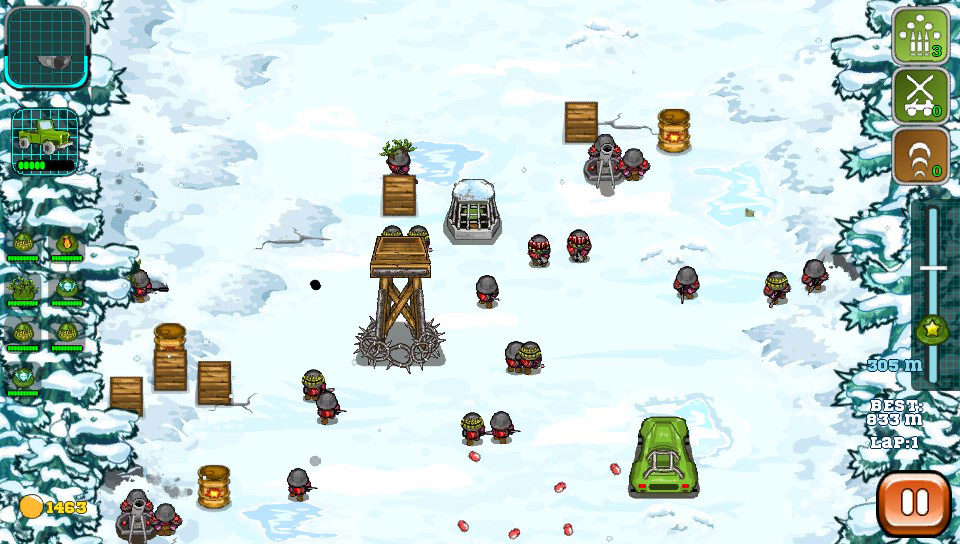 Rather than being a port from another platform, the original release of the game was infact a free ad-supported browser game. Yes, all you had to do was visit one of the online games websites hosting the game, go to the relevant page and before the game starts you just have to sit through an advert. No in-game purchases to endure, just the full game to play whenever you revisit the page. Vita owners, on the other hand, are being asked to pay £3.99 for what others are able to play freely.

The concept behind the game is simple. You start off with a single soldier – the titular Battalion Commander – and you have to progress through the continually scrolling level as far as you can avoiding / defeating all of the enemy soldiers, vehicles, outposts until you reach the goal at the end. Your weapons fire automatically so all you need to do is move your soldier using the analogue sticks and occasionally press any of the action buttons if you get into a sticky spot to call for help using one of your available Skills (air strikes, napalm attacks and so on).

You don’t have to do this single-handed though. En route, you can rescue captured soldiers who will join your squad, each with their own abilities and it’s your task to guide them all to safety, avoiding gunfire, collecting cash and experience points from fallen foes, health pickups and trying to survive to the end of game boss. Lose all your squad (and all your own health) and it’s game over. 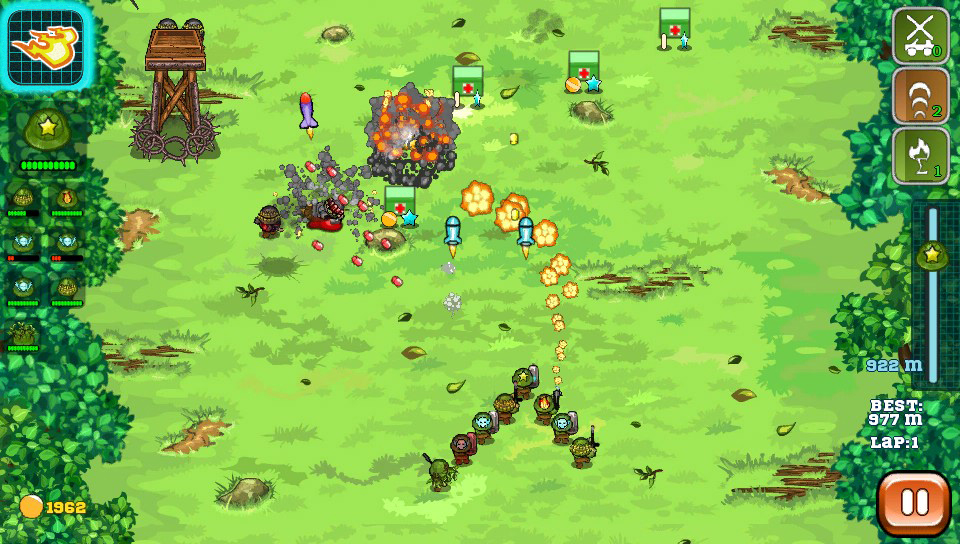 As you progress through the game, any experience earned allows your Commander to progress through levels, each unlocking different skills and abilities. This will allow you to purchase upgrades to your team, new weapons, more health for your character and allow you to have more squad members. Ultimately, once you’ve upgraded your team enough and managed to complete the basic game, a second game mode is unlocked allowing you to play the game in a free running mode where you simply have to survive as long as possible without being killed.

Along the way, you’re also set side-missions to complete – these can range from defeating a fixed number of enemies, to using a certain weapon a set number of times and on completing these you will earn bonus experience and cash. While not essential to playing and completing the game, they make a nice diversion and extra element to the gameplay. 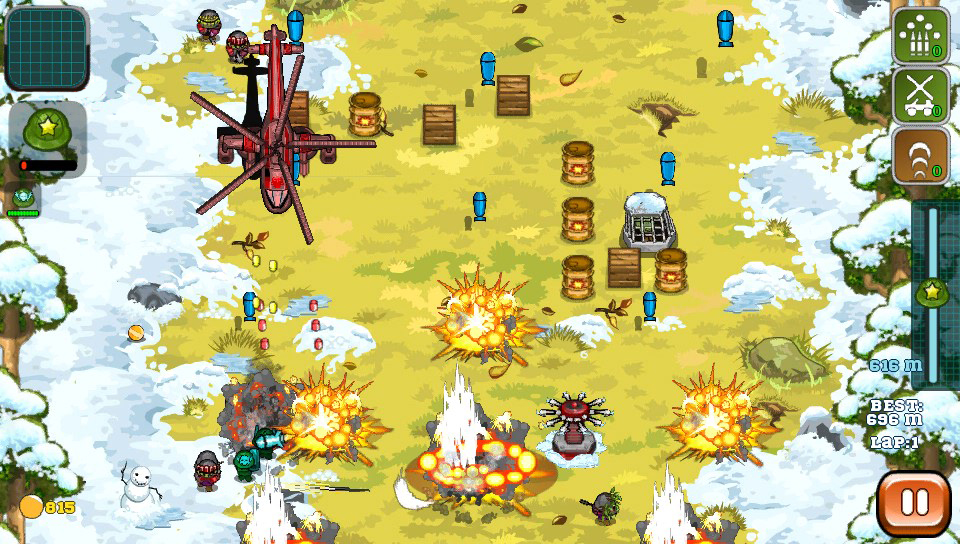 As I mentioned at the start, this is a port from a browser-based game so apart from having to pay for the privilege of playing it on the Vita, what exactly are the differences between this and the free version? Initially I was quite disappointed and felt that PS Vita owners were being short-changed in almost every way, being offered a shorter gaming experience with much of the content missing but that wasn’t quite the case…

For starters, the game’s front end and general set-up has had a makeover. In the original version players could select what weapon the commander would use and what Skills (effectively a special attack) was used during play. As you progressed through the game, upgrades could be puchased as with the Vita version and these would be introduced to the game and applied automatically. This time, while the upgrade system is still in place and these are all applied automatically (apart from the core weapons and skills that are still selectable), there is now a perks system in place. 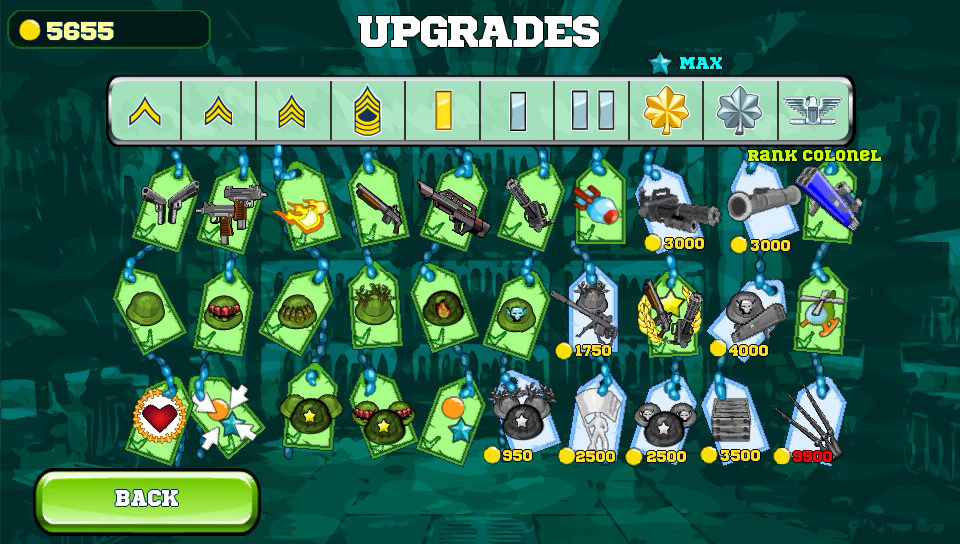 You have a total of four Perks slots at your disposal that are unlocked as you progress through the basic game and different abilities can be put into these slots. You start off with a single perk to choose out of 16 but more perks and slots are unlocked during play. These perks include many that – at first glance – appear to be ones that were omitted from the PS Vita version of the game when glancing at the upgrade list. However, by including them in the Perks section rather than as Upgrades making them optional, it adds an extra tactical element to the game as you are only able to use a maximum of four at any one time. Do you choose health regeneration? A vehicle at the start for a distance boost? Double health for all your squad? With 16 to choose from it makes the game far more intriguing. 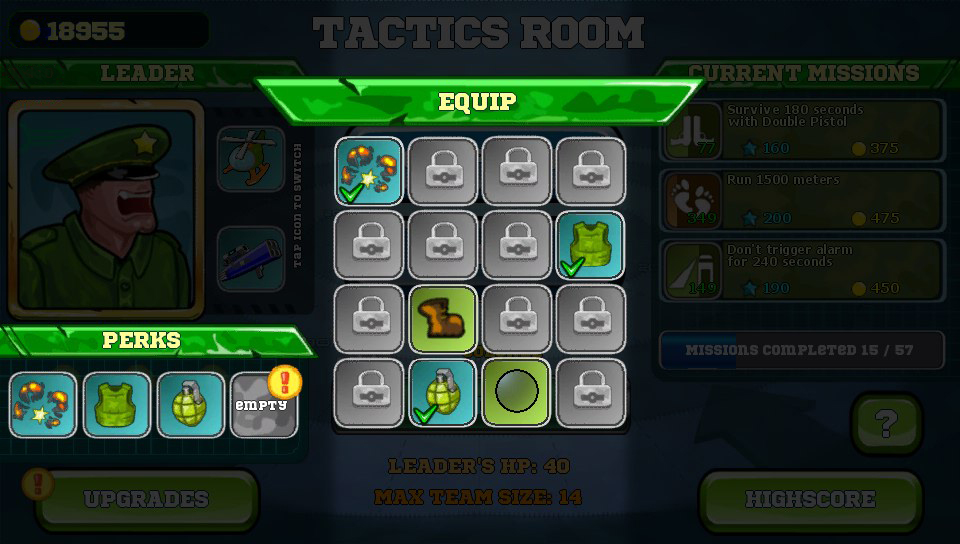 The lifespan of the game has been extended as well. While some of the latter Upgrades do make progress easier, collecting experience is harder. Many enemies drop coins for you to buy Uprgades between games, compared to the browser version offering coins and XP for every pickup. That method allowed me to complete the core game of the online version in little over an hour and in contrast the Vita version needed several play sesssions. Equally, once the main game mission is completed in the browser it means Game Over… but not on the Vita. The game simply continues and allows you to do it all over again and run another “lap” of the level. Yes, it makes the game repetitive but it stops it from being too short.

The final real difference between the two are the Missions. The original had 100 whereas the Vita version has dropped down to 57.  The only reasoning I can think of behind this is that many of these “missing” missions are releated to the change in the Perks / Upgrades system. It doesn’t affect the gameplay too much though but it potentially impacts its long term appeal if you’re aiming to complete every aspect of the game. 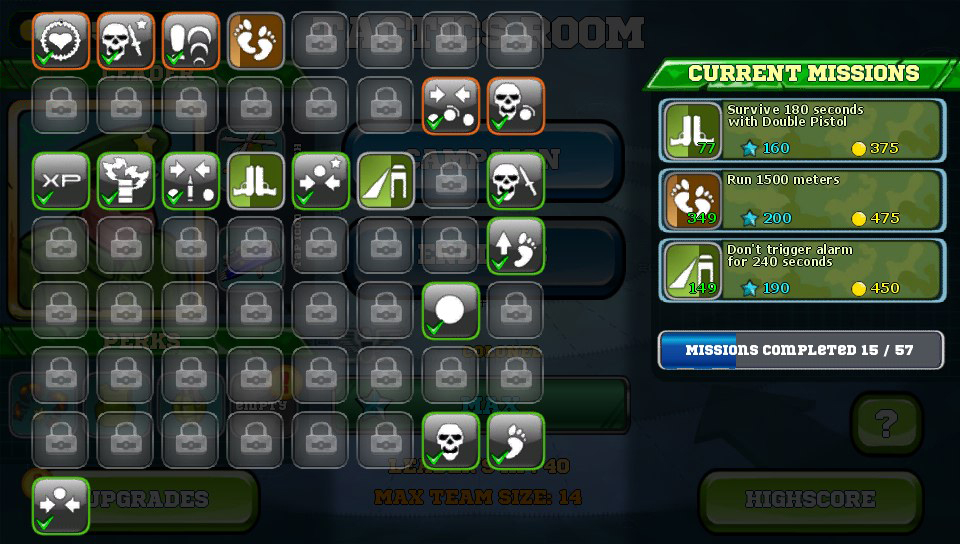 I can’t talk about the two versions without comparing the controls though. Online, understandably, the controls are mouse / keyboard based and while the mouse is naturally the best option it often feels sluggish and is frequently prone to moments when the pointer leaves the playfield leaving your troops motionless and vulnerable to attack. The Vita, however, uses either analogue stick and feels like a better home for the game.

I had mixed feelings about this at first. Initially it did feel like a rather bland and repetitive endless runner and even after playing the online version to compare the two my opinion didn’t change a great deal. After spending more time with it, it does have a strangely compelling appeal and there’s no denying that the Vita port is superior to the online incarnation in almost every way. Gameplay has been enhanced beyond recognition, the visuals make much better use of the Vita’s screen and resolution and definition is superb and the playfield is much larger in proportion to the characters making the game seem much bigger. Is it a game you’ll be coming back to several months down the line? Probably not but it’s short-term fun and that extra strategic element and the missions will give you just enough gameplay to make sure you get your money’s worth from this one.