There are so many elements of Dokuro that seem borrowed from other games. Stolen princesses? Check. Evil Dark Lords? Check. Old castles? Check. Brave Prince Charmings? Yep, you guessed it…

However, despite the fact that this puzzle platformer is somewhat plagued with familiar concepts and tried and true gameplay staples, Dokuro manages to plough its own distinct furrow by bringing these concepts together in a slickly presented package, whilst giving them its very own unique spin on the formula.

The Dark Lord has captured the kingdom’s beautiful princess, whisked her away with the intention of marrying her against her wishes. Dokuro, one of The Dark Lord’s minions, witnesses the poor princess crying, which breaks Dokuro’s little undead heart. He pledges to help free the princess from the clutches of the evil Dark Lord and help her escape the drab and dreary darkness of the Dark Lord’s castle. However, there’s a small problem – the princess can’t actually see our gallant hero-to-be. Thus begins Dokuro’s arduous, and rather thankless journey to save the kingdom’s damsel in distress.

From the minute I laid my eyes upon mere screenshots of Dokuro, I knew in my heart that this was a game I wanted to play. The game has a wonderful black-and-white aesthetic that really pops vibrantly on the Vita’s beautiful display. The sparing use of orange, red and blue really stands out thanks to the minimalist monochrome art-style that the game so effectively employs. 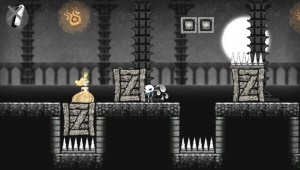 Complementing the game’s terrific use of colour is the hand-illustrated character art that is also a treat to behold. Neat details here and there, such as little droplets of sweat popping from Dokuro’s skeletal brow or the fact that he does a cute little dance if you leave him still for long enough, really helps to breathe life into our lovable bony hero. And then there are the boss designs which astoundingly look both humorous and terrifying in equal measure. These range from horned scarecrows with gigantic skulls as fists, to a giant spider with a chef’s hat, a creepy grin and a cleaver who continuously pelts you with fiery flying fish. I know, it needs to be seen to be believed.

The gameplay in Dokuro is effectively one long escort mission, kind of like a 2D Ico but with way more puzzles. Your primary objective is to help the princess make her way through each perilous level without her being harmed by the numerous hazards that await you. Dokuro can double jump, flip switches, perform a basic attack and even drink a potion that turns him into a sort of Prince Charming (who is ironically no where near as charming as Dokuro himself). When in the form of Prince Charming, Dokuro can deal extra damage when attacking. He can also carry the princess but unfortunately can’t jump very high when doing so. Thus many of the puzzles revolve around switching from one form to another to solve each head-scratching puzzle.

Dokuro implements the use of touch controls, but they can be a little finicky at the best of times. These are used to draw ropes or fuses which are necessary to connect certain objects of interest. For example, a platform maybe missing some rope, so in order to progress the player will need to draw the rope and connect the platform to get it to move. It’s pretty straightforward, but the mechanic does get trickier in the later levels. It’s a welcome mechanic that helps mix things up and round out the puzzle-platform gameplay nicely. 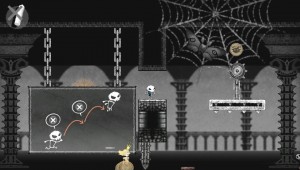 Some of the puzzles can be completed in different ways which is really cool, but some of the later puzzles rely on everything going just right. Which can cause a lot of frustration. It also doesn’t help that the difficulty is pitched very high. I’ll be honest, I’m no puzzle expert, but this game really tested my patience more times than I care to admit. On the whole, the game’s puzzles are as hard as diamond nails, particularly the later ones, which is both a blessing and a curse depending on what you’re looking for. Thankfully, Dokuro gives you the option to skip forward up to 10 levels, which helps to alleviate any frustrations you may be experiencing. It kind of feels like cheating, but it’s a welcome feature nonetheless.

A minor grievance I had with the game were its controls. I know Dokuro isn’t a precision platformer and I understand that the choppy character animations lend themselves well to the old black-and-white picture show feel the game tries hard to emulate, but I just wish the controls were a touch tighter. I think I would have avoided a ton of deaths if the controls were more responsive and fluid.

Another bone of contention is the music. At first it’s all fairly charming and inoffensive medieval-flavoured jingles, but it unfortunately gets old really fast. I ended up turning the music down in the settings as it did start to grate on me.

Ultimately, Dokuro is a bit of a diamond in the rough. Some repetitive music and wonky controls let it down, however, Dokuro does bring a lot of good things to the table with its clever puzzles, wonderful visuals, fantastic bosses and oodles of content. The only major issue is that you’ll have to work your fingers to the bone to finish everything this challenging and satisfying puzzle platformer has to offer.

With 150 challenging levels and a handful of wonderful bosses Dokuro is a steal at £2.49 and also packs a platinum trophy too for all you trophy hunters out there. It’s very much like Limbo’s emaciated cousin but with much harder puzzles and slightly wonkier controls. If you’re in the mood for some hardcore puzzle action then Dokuro is a really good choice and would make a welcome addition to any gamer’s Vita library. 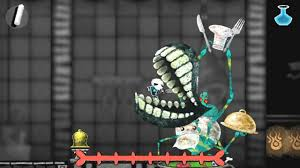