One of the great innovations that Sony added to the PS Vita was the touch screen. While it’s been a key feature of the DS and 3DS and has become a key element of most games on the system and has outgrown the initial novelty function that many thought it would be, Sony took things further with the Vita with the introduction of the high quality multi-touch OLED screen.

While the Vita’s screen has been a great asset to the console and has added depth to a number of games, there has been one drawback… while the DS opted to use resistive touchscreen technology allowing for more accurate reading of where the screen was used, Sony opted to use the less-accurate capacitive screen for the Vita. The differences between the two types of screen are numerous – while resistive screens are more accurate, to work effectively they need the use of a stylus and are pressure sensitive. For them to register properly where the screen is being touched, a degree of pressure needs to be used. However, the benefit is that these screens are relatively inexpensive.

In contrast, the PS Vita’s capacitive screen is a more expensive route and is the type of screen found in most, if not all modern smartphones and tablets. They are not pressure sensitive and as such can be used with fingertips quite reliably but they lose a degree of accuracy in the process. However, they do open up the opportunity to offer uses multi-touch capacity which has been used to great effect for games and apps on phones, tables and – obviously – the Vita itself in ways that the DS and 3DS could only dream of.

Now here comes the problem… the type of screen the Vita uses, while fine for most games and general menu navigation, it doesn’t lend itself particularly well to games that require precise control. Infact, if anyone has tried to use a smartphone’s touchscreen for precise gaming, you’ll understand exactly what I mean. So what do you do? Well, Signalex have the answer with this stylus.

Sold and marketed as an iPhone stylus this comes in a two pack. There is a smaller extendable stylus with an angled tip and a longer stylus with a rounded rubber tip and this is the one best suited for the Vita. It’s approximately 3″ in length and while is has a metallic look to it, it is actually made from plastic apart from the tip, but it is extremely comfortable to hold. In use it works extremely well and does everything you would expect it to. Navigating the menus on the Vita works like a charm – scrolling the Home Page is quick and easy, as it selection icons, closing game pages, selecting items from lists – pretty much everything you could ask for and you’ll soon wonder how you managed without one. 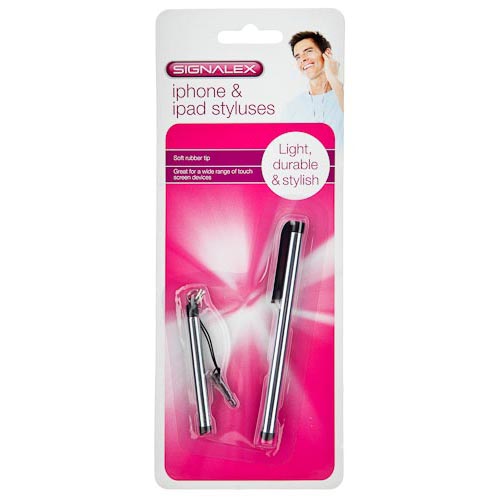 The real test comes in gameplay and I decided to put it through its paces with Smart As… This game has frustrated me more than any other when it has come to the touchscreen. There are elements of this that are dependent on the screen for handwriting recognition and a significant percentage of the time, the Vita has failed to recognise what I have written no matter how legible my writing has been. However, using this stylus it has been 100% reliable accurately recording everything I have entered. If nothing else, it has breathed new life into a game that had been consigned to the shelf and one I had seriously considered trading in at one point.

So is this worth getting? Absolutely. If you play any games that make use of the touch screen then this really should be an essential purchase. Any stylus that has been designed for the Nintendo DS won’t be suitable for the Vita (it has to be rubber tipped like this one) but at the price this is retailing for, you won’t find a better bargain on the market. Oh, yes, the price… this is made exclusively for POUNDLAND in the UK so I’m sure you can guess the price. Yes, just £1 so there’s no excuse not to go any buy one of these right now!