As far back as the 8-bit era, Disney and video games have gone hand in hand and that has continued throughout Sony’s association with gaming. Every Sony system has had a diverse range of Disney related games with something for all ages so it’s no surprise that Sony Computer Entertainment have produced this Disney-themed pack as part of their ongoing series of memory card starter packs for the PS Vita…

Intended as a bundle to encourage gamers to buy memory cards while offering greater value for money by bundling a selection of linked games from the PSN Store by way of a download voucher, this pack focuses on offering gamers a 16Gb memory card alongside six Disney titles. As with most of the other packs that have been offered, it contains a mixture of PS Vita and older titles compatible with the Vita from the PSP and PS One Classics ranges but still with a combined value far greater than the RRP of the pack itself.

On offer here to accompany the card is the PS Vita title Epic Mickey 2: The Power Of Two, the PS One game Mickey’s Wild Adventure and PSP games Up, Toy Story 3, Cars and Ratatouille. While it’s the smallest line-up of all of the bundles to-date and aimed at a younger audience it’s still a healthy mix of games with a current combined PSN Store RRP of £48.74. Add to that the current RRP of a 16Gb memory card and it makes this £39.99 package incredible value for money.

Onto the games themselves and as I have already mentioned unlike many of the other packs that Sony have produced there is only one PS Vita game in the bundle this time around. Even thought it was released at retail at a budget price, Epic Mickey 2 stands up remarkably well and is a wonderfully playable arcade adventure and captures the spirit of Disney magically. Although it was released considerably later than all of the other versions, PS3 included, it has to be said that it was well worth the wait and the general consensus is that the PS Vita has the best version of this game.

Although somewhat old now, Mickey’s Wild Adventure still manages to hold its own as a fun platform game, not surprising really considering the pedigree of the developers (Psygnosis, the team behind WipEout) and as for the movie tie-ins… Cars is probably the weakest of the entire collection being a somewhat average racing game but the others not only manage to capture the look but also the atmosphere of their respective movies superbly recreating many of the film’s scenes and moments brilliantly. Toy Story 3 is probably my personal favourite of all of them, but that stems from a love of the film series anyway. The only real disappointment I have is the fact the the DLC available from the game doesn’t seem to be available from the PS Vita’s store but that doesn’t spoil what is a great movie license.

When it comes to the actual downloads, the games take up less than half of the memory card meaning that you’re also left with ample space afterwards for your own store purchases avoiding a problem found with some of the other Mega Packs in the series. One thing to note with all of these is that Mickey’s Wild Adventure, being a PS One title, will also run on the PS3 and PSP so the single download will let you use the game on multiple systems, and for those of you owning a PSP as well as a Vita, you’ll be able to do the same with the four PSP titles.

Overall this is an offer that you simply can’t pass up if you are looking for a new 16Gb memory card for the PS Vita. As well as the essential extra storage space, there’s enough gaming entertainment to keep you occupied for quite some time – even if you’re not the biggest Disney fan – and unlike some of the other packs there’s still plenty of space left on the memory card for storing other games. A must have purchase. 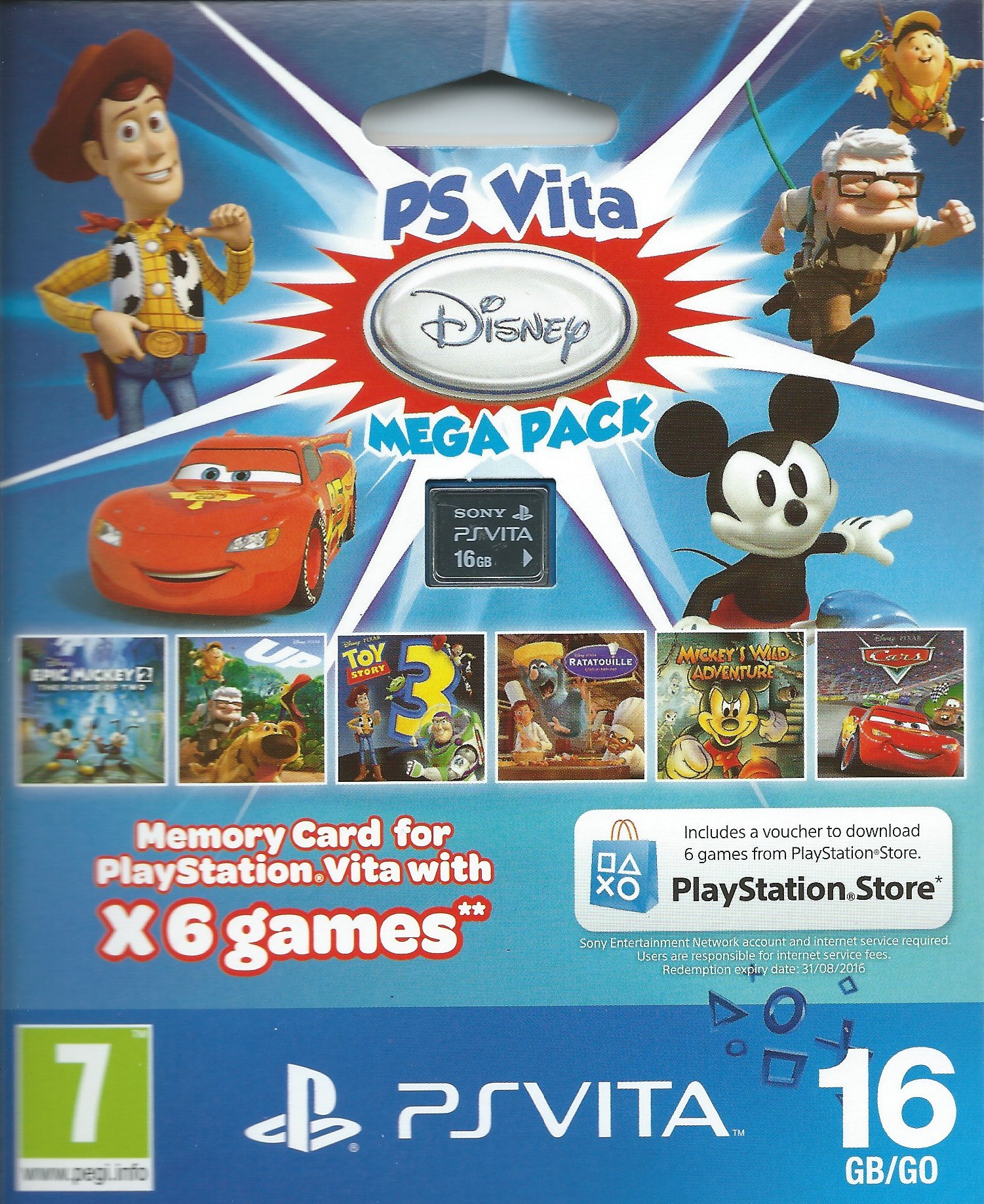