Do you remember “Secret of Monkey Island”? It was one of my favorite games when I was learning how to use a computer. Between it, the original “Prince of Persia” and “Duke Nukem 3D”, I’m surprised I learned how to use anything besides the mouse and the arrow keys.

So when I saw that another Lucasfilm point and click was making its way to Vita, I couldn’t wait. “What did you think of it?”, I hear you say. Allow me to tell you.

Let’s start with the positives:

This game implements one of the most amazing features I’ve seen in a remastered game: you can press the Select button on your Vita and it switches between the original, and the remastered version. There are no menus, no anything. Just a smooth crossfade between 1993 and 2016. It’s fantastic, and any remastered game that releases in the future better have this, too.

The graphics are absolutely gorgeous. Very 90’s in the way they pop out of your screen. None of that “subdued, everything’s bleak like a DC Universe movie” for His Tentacleness, thank you very much.

The music is another highlight. The original was good, but hearing these songs with full orchestration makes them go from “that’s nice”, to “holy smokes that sounds like an excellent Bugs Bunny film”.

The story… well, it wasn’t my cup of tea, but I can see how the craziness of it all can seduce people with a penchant for cooky.

Sadly, there were things that I didn’t like, too.

The gameplay hasn’t aged well at all. It’s way too convoluted for a point and click adventure, and counter-intuitive to say the least. There are too many ways to interact with objects. I know this is built into the system and it’s hard to take care of in a remaster, but I really think they could have streamlined it. I know it would have required tinkering with some puzzles, but I think the game could have benefited from that.

Another thing that didn’t jive with me was the dialog. It was way over-the-top (again, very 90s), which I could have lived with. But the thing is, the timing was all wrong.

Switching back and forth, I can see that this happened in the original, too. I’m guessing it was due to hardware limitations during the original release. However, having spent the last 10 years of my life in audio production, I can safely say they could have done something to fix the timing and pace of the dialog.

It makes the jokes fall flat, and you can’t wait until it’s all over to keep playing. 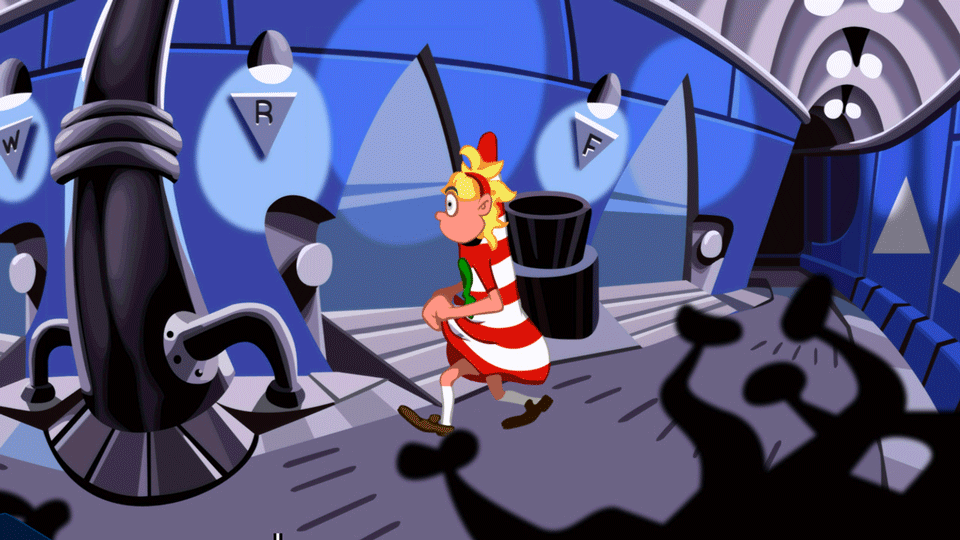 The sad thing is, as I was playing this game to review it for this site, I was also playing Telltale’s “Back to the Future: The Game”. Undoubtedly inspired by Lucasfilm’s games, Telltale’s Marty-and-Doc adventure just felt so much more enjoyable: the options to interact with objects made sense, and the dialog was so, so Martylicious.

At the end of the day, “Day of the Tentacle Remastered” and I didn’t jive. We didn’t click (he, get it?). Even though I’m a child of the 80s, and grew up on point-and-clicks and old games, I found this particular entry into the genre a fantastic piece for the period, but one that has not aged as gracefully as others.

Your experience may, and probably will, be different.