While I’ve been a fan of the genre since the early pioneering LucasArts games, point and click adventures are few and far between on the PS Vita. Double Fine Productions gave us a selection of great games – remastered versions of PC classics and completely new releases. We were treated to the delights of original games such as Demetrios: The Big Cynical Adventure. But very few others have graced the console. The Tower Of Beatrice from Sometimes You attempts to redress the balance mixing the point and click formula with a deeper puzzle element. 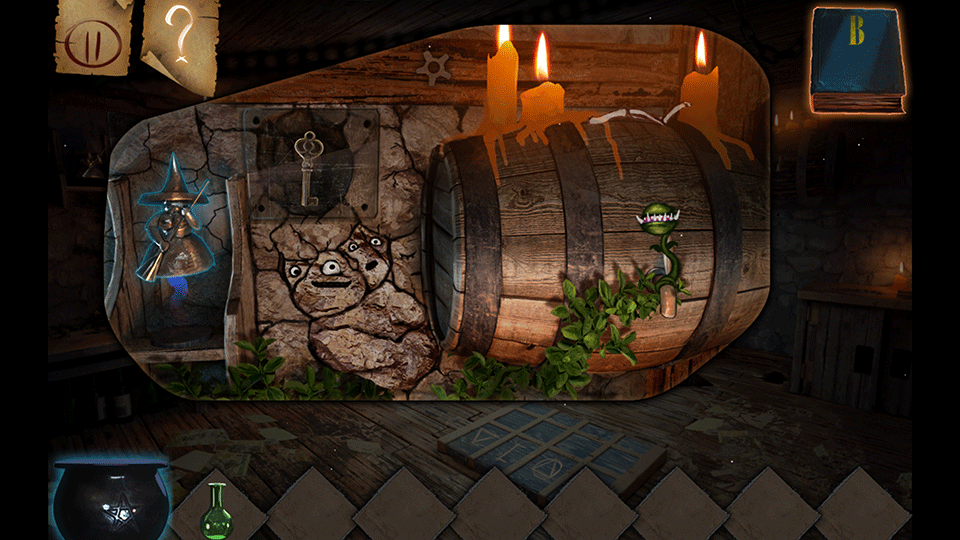 Entering The Tower Of Beatrice

Unlike other point and click adventures, The Tower Of Beatrice takes a different approach. Taking on the role of a thief, you’ve been hired to steal a spell book. It belongs to a sorceress known as Beatrice and all you know is that the book is kept in a mysterious tower. Upon entering, you find the book but you’re quickly overpowered by one of her magical traps. Armed with only your wits, you have to escape all six floors of the tower, and get the book to your employer… while dealing with the tower’s unusual inhabitants along the way.

What ensues is a series of six escape room styled environments. Each floor is a themed room within the tower and you have to solve a variety of puzzles. Solve all of them and this will allow you to unlock the door and descend to the floor below. The puzzles in the game are quite diverse. Many fit the style you would expect from a point and click game – using object a with item b. Others require the use of the spellbook you have stolen, creating and using spells with items you have discovered.

Others take a more novel approach and this is where the game departs from the norm. The Tower Of Beatrice makes extensive use of a wide range of puzzles that are introduced throughout play. While some are easier – and more logical to solve – than others, none are impossible. What is refreshing is the sheer variety on offer though. From chests that need codes to crack combination locks, to maps that need you to plot out constellations, each new room will surprise you with the challenges that await. 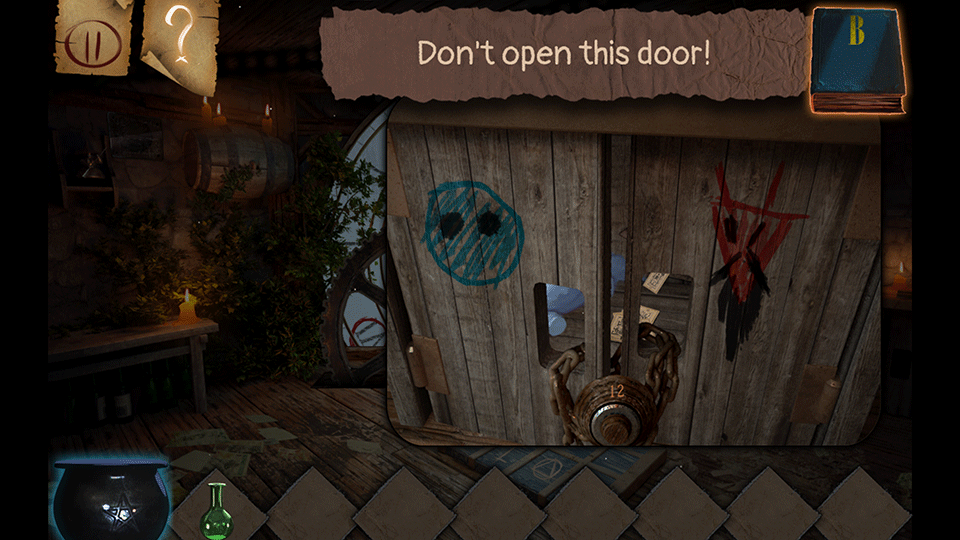 As I mentioned earlier, you’re not alone in the tower. While you don’t face off against Beatrice, her presence can be felt all around and she taunts you throughout the game. There are all manner of strange creatures that you can interact with and most will help you along the way. From animated objects with personalities to fire and ice demons, you’ll encounter a true menagerie. And despite many of their appearances, almost all of them will be keen to help you on your way… for a price.

One thing I did find reassuring is that The Tower Of Beatrice is relatively idiot proof as adventures go. I’ve played games before where it’s been possible to use objects in the wrong place, or give away critical items that you need to complete your adventure. That won’t happen here as the game’s interface only allows you to complete tasks that are needed to complete the puzzles in each room. It may not seem a significant thing to mention, but when you’ve been frustrated by other games in the past, it’s a relief to know that you can experiment and try anything without fear of repercussions. 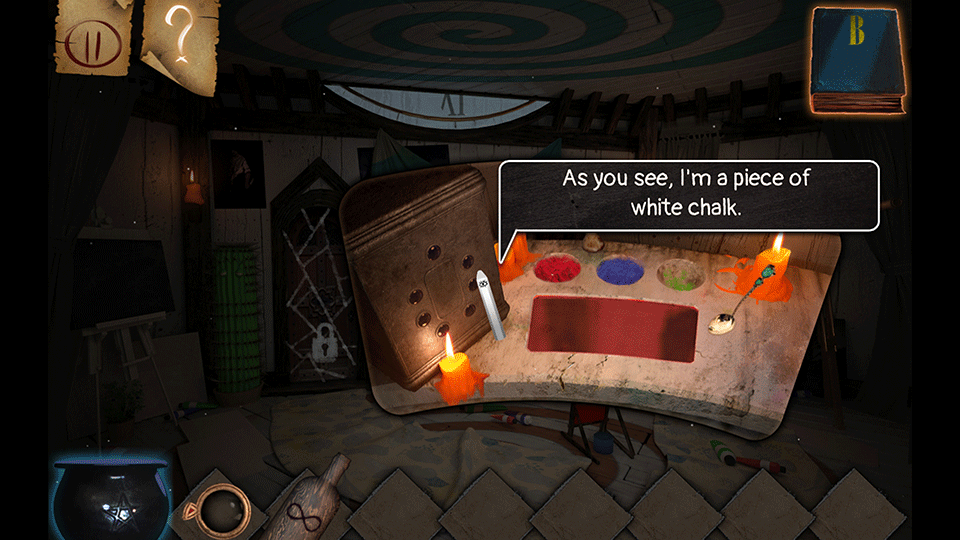 Visually the game is extremely atmospheric, with suitably dark and brooding visuals. The scenes are accented with detailed but subtle animations and the residents you encounter are filled with charm and character. While there’s no voiceover track for the game, the music works well, and is complimented with some good effects. While none of this is going to win The Tower Of Beatrice any awards for its audio/visual presentation, it’s more than up to the job here.

There are always positives and negatives with any game. First, I really enjoyed playing The Tower Of Beatrice and found it to be a fun and challenging game. While some of the puzzles were frustrating, the help system soon got me back on track. If anything, I found it more useful to identify hotspots that were clickable than anything else. But most importantly, the puzzles and characters were captivating enough to keep me hooked and wanting to keep playing and work though the levels.

But it’s not without flaws. I had a couple of minor issues, with one frustration being the lack of a save function. The only time the game saves is when you complete and exit a room. If you are part way through solving it, quit and return later all your progress is lost and you have to start that room again from the beginning.Even worse, there seems to be an issue with the game somewhere that affects saves generally. I had completed several floors, quit the game completely and returned later to continue. Yet a few days later I came to pick up where I had left off and all my progress had gone meaning that I needed to restart from the beginning!

Sadly that wasn’t my biggest problem with the game… What really lets The Tower Of Beatrice down is its control system. At times the cursor is hard to distinguish from the backgrounds and objects on screen. And when you can see it, movement is incredibly sluggish and unresponsive. Which is a crying shame because this gets in the way of some fiendishly good puzzles that are just screaming out to be solved. 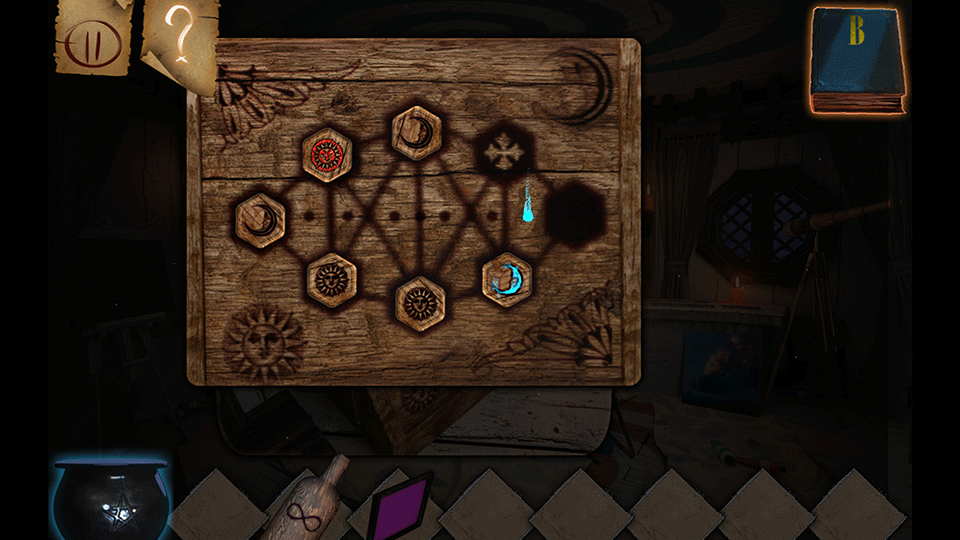 The Tower Of Beatrice is an enjoyable game and it’s pitched at a pocket friendly price so I certainly have no problems there. However, the save game issue really is problem. For a game that would be perfect to play on the go or in short sessions, you simply can’t take the chance to do that. At the time of writing this, I haven’t been able to complete the game not because the puzzles are too tough, but because I haven’t had the time to play through it in a single session and it’s a crying shame. There’s a good game in here begging to be played and it’s being held back by its controls and a horrendous bug that makes a single gaming session or the use of the Vita’s standby mode a necessity.