It can’t have escaped anyone’s notice that online casinos are big news these days. Their names are everywhere, from on the front of footballer’s shirts to the ad breaks on TV, not to mention on the pop-up banners that seem to appear almost every time you go online.

It’s also a fact that’s borne out by the latest figures from the Gambling Commission – the organisation that oversees and regulates all gambling activity in the UK. Of the £14.5 billion raised by gambling in the period from October 2017 until September 2018 £5.6 billion of it came from the remote sector which includes online casinos.

A Casino In You Hand

But, in the light of the obvious popularity of this form of gambling, there still seem to be hardly any games like this for the PS Vita. For some strange reason, the genre has almost skipped the console completely. We’ve seen a few themed pinball tables released from Farsight Studios for The Pinball Arcade. A more unusual addition to the Vita’s library was seen last year with Vegas Party. And smaller studios have released other titles with casino elements or card games including a personal favourite of mine from the PlayStation Mobile range, Super Tank Poker that blended poker with the Advance Wars style turn-based gameplay.

But apart from those, things have looked quite desolate. While the PS Vita has had the smallest installed userbase of all of Sony’s consoles at just over 16 million to-date, that’s still a lot of potential gamers waiting to spend their hard-earned cash on games. We’ve got titles covering almost every other subject so it’s bizarre to see these missing.

When you look across the PlayStation family things are VERY different. Right since the days of the original PlayStation there have been both specialist titles focusing on individual games and entire casinos. By the time the PlayStation 2 had emerged we were seeing official licenses from the major poker tournaments such as WPT making appearances in their own games. These soon moved over to the PS2’s “little brother”, the PSP, as well as games based on real-life casinos.

On the PSP a personal favourite of mine there is Hard Rock Casino that was released in 2006. This follows the same basic format of Four Kings Casino And Slots that I’ll mention in a moment, but is let down by its lack of polish in both design and the way that it actually plays but that’s probably the closest we’ve seen in a handheld format. 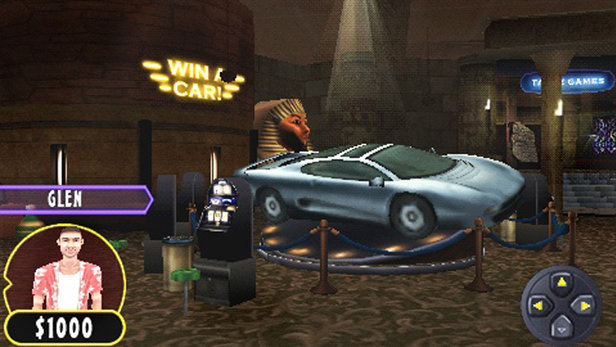 The PS3 continued with this trend, and even had a dedicated casino in its online virtual world PlayStation Home allowing gamers to interact with other PS3 owners all over the world.

Probably the best known in recent years for PlayStation is Four Kings Casino and Slots. Released back in 2015 by Digital Leisure Inc., for the PS4, Steam and Facebook, it’s a pretty popular game and has consistently received a four-star rating.

The setup is pretty simple. You create your own avatar and then head for the casino. There’s a wide range of games that include poker, blackjack, roulette, keno (a sort of cross between lotto and bingo) and the aforementioned slots. As you get more adept you can start playing for higher stakes and eventually reach VIP status. A bit more fun is introduced by the fact that you can use your winnings to buy ever more extravagant outfits for your avatar.

So What Options Are We Left With?

So given these facts, it does seem like the gaming world, on Vita at least, is crying out for someone to come in and create an all-new casino game. The fact that there’s great appetite for it has surely been shown by the buzz and excitement that arose when Rockstar Games announced the opening of GTA’s Diamond Casino and Resort in July of this year.

But, having said all this, perhaps it’s important to recognise that one of the key elements of online gambling will always be missing on the PS Vita, namely the chance to win real, not virtual, cash. After all how much better is it to play online roulette for real money than just to buy fairly meaningless tokens? There’s also the added excitement when real cash is involved, making it an altogether more absorbing experience.

So maybe, until cash games become possible on the Vita, we’ll have to put up with what’s out there on other systems that we may own. But then again, there are so many actual online casinos to choose from that players over 18 may already have all the choice they need.