As the end of PlayStation Mobile draws closer, gamers and developers are making their final preparations for what is inevitably going to be a sad time for everyone involved with the much-maligned format. There have been over 500 games and apps released for PlayStation Mobile since its launch in October 2012 and while some have been of questionable quality (and questionable legality in some cases), there have also been some remarkable games and apps as well.

We’ve been treated to some stunning shooters, RPGs, platform games, adventures, puzzle games and a wide variety of apps that have filled a void that Vita owners have been crying out for adding a whole new dimension of functionality to the Vita. While Sony added a calendar function to the PS Vita through one of its System Software updates, it was PSM that brought this function to the Vita first and it’s only been through PlayStation Mobile that the Vita still has access to a comic reader…

We’re still working through our list of our 100 Must Buy PlayStation Mobile Games and we’ll be completing this run down over the next few days so you’ll all still have the chance to grab what we feel are the best titles that PlayStation Mobile has to offer but in the meantime we wanted to give you all a reminder of what is going to happen with the service.

15th July is the final day that you will be able to buy new games from the PSN Store. While we don’t expect any new games to be released on this day, we are not ruling this out as there have still been titles released this week. If games are released and anything does appeal to you, you’ll have less than 24 hours to purchase them so we recommend that you have sufficient funds in your PSN account to buy everything you want and give these titles priority over everything else in the store.

With regards to updates to games and apps, developers have been able to submit revisions to their titles until this sale deadline so it is still likely that updates will be released after this date so you should continue to check games that you already have incase updates are released with additional content, features and bug fixes.

Most importantly though is that we are urging everyone to back up their collections. In September, PlayStation Mobile is being taken offline completely. What this means for gamers is that titles will no longer be able to be re-downloaded from the PSN Store so anything you have already purchased will not be available. What we are advising is that you back-up all of your titles to your PC and / or PS3 using Content Manager (if possible make multiple backups) and if you have a spare memory card for your Vita, make a backup on that as well. We do appreciate that this is an expensive option, especially if you use a memory card, but once the service is taken offline there has been no statement from Sony regarding what would happen should gamers lose access to their PSM collections and we know that some have invested heavily in PlayStation Mobile titles.

In terms of your existing games, we are recommending that gamers check their collections for the latest updates to ensure that you are running the most recent versions of all your PSM games and apps but unfortunately as PlayStation Mobile doesn’t check titles automatically this may mean re-downloading your entire collection for many gamers. However – and we don’t know if this is affecting every PS Vita owner – there may be a problem with the PSN Store in relation to PlayStation Mobile titles. Normally when re-downloading titles on the Vita, you go through the PSN Store to access your Download List. Here you are presented with three options – Games, Videos, and PlayStation Mobile. A number of users have noticed that the PlayStation Mobile list appears to be empty when trying to view it. 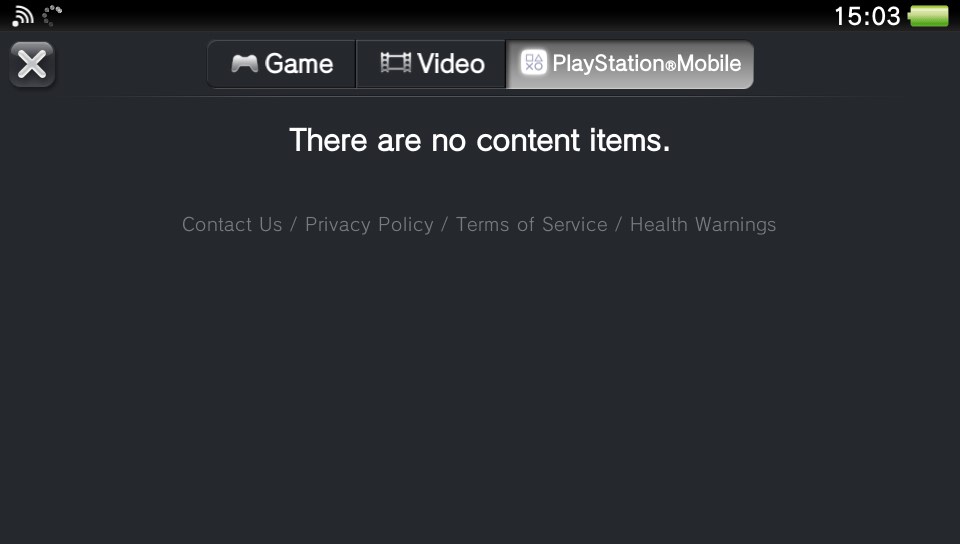 What this means is that you will need to go to the PSM part of the store and redownload every title manually. While this may not be a major problem for those of you with smaller PSM collections (other than finding where games are!), there is one potential issue which we won’t be able to confirm until next week… whether or not this part of the PSN Store will actually be online after the 15th July sales deadline. If the PlayStation Mobile part of the store is taken offline completely then gamers will no longer be able to download or update any of their games and this could prove to have serious repurcussions if the service is effectively removed for many gamers two months early.

We’ll bring you an update when we know more.