Vertical Drop Heroes is a procedurally generated platform RPG from Nerdook Productions. The scene is set where the prophecy is revealed to you telling of ancient legends that speak of a great hero who will enter the portal and fight across many strange and fantastic lands in search of the Holy Sanctuary that holds the great secret to existence! It also accurately foretells of the many heroes who died trying to fulfil the prophecy, a hilarious nod to the many attempts we all make at these platformer games and the many times our character dies as we try to reach the end. 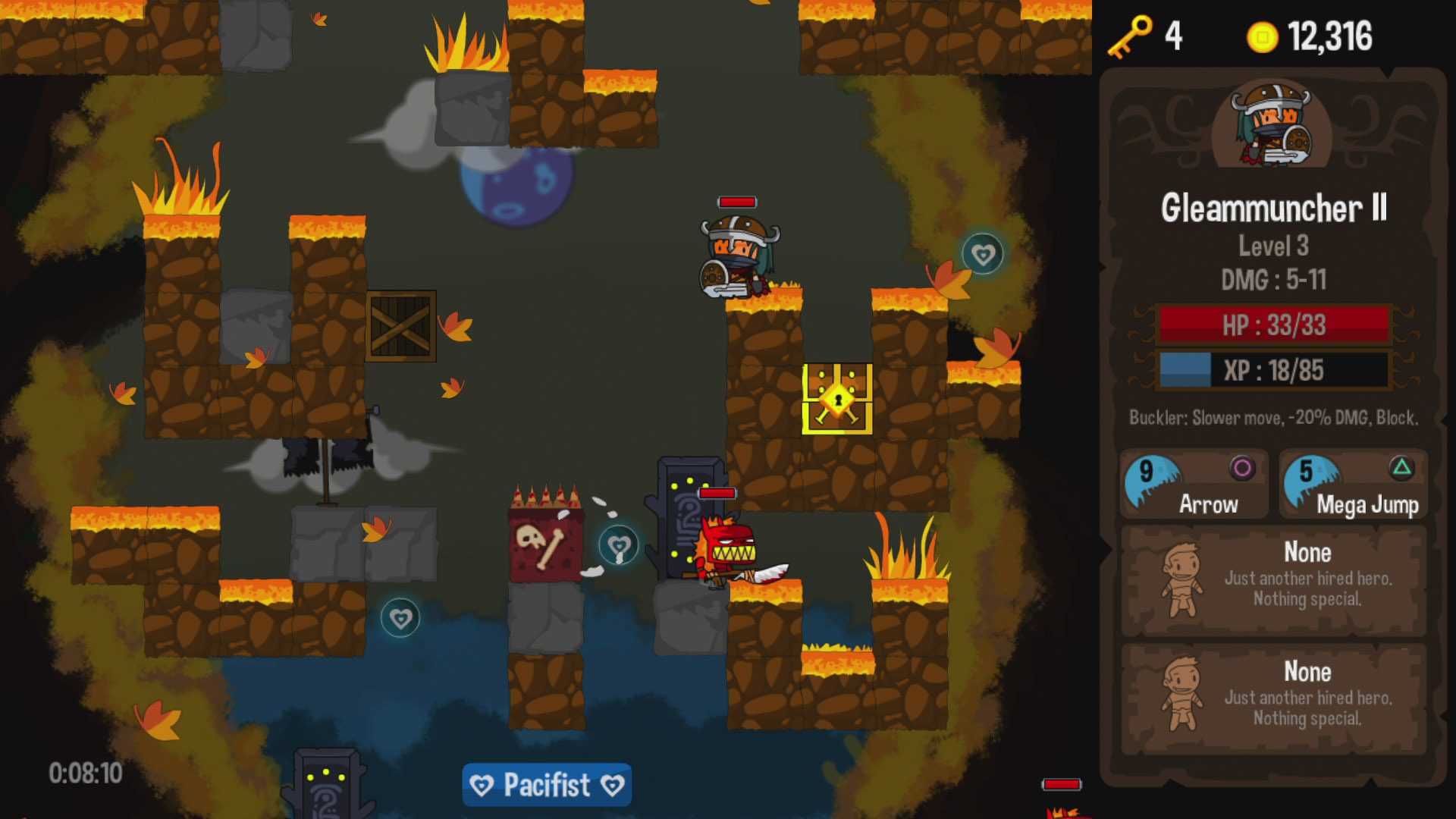 As befits any RPG game, we are presented with a choice of characters for our hero, along with the ability to reroll stats, albeit at a nominal cost of 5 coins. With names like Smokescythe, Hellmuncher and Ripstrike, and the cute chibi-style caricatures, any of them could be the one hero that makes it through to the end!

Our heroes each have a special ability such as create clones, mega jump and summon dragon. The abilities can be particularly useful when it comes to facing the boss monster at the end of each of the ten levels. Be sure to try at least one hero with the summon dragon ability, the cute little beasty that appears and flies around chomping the bad guys is definitely worth seeing! 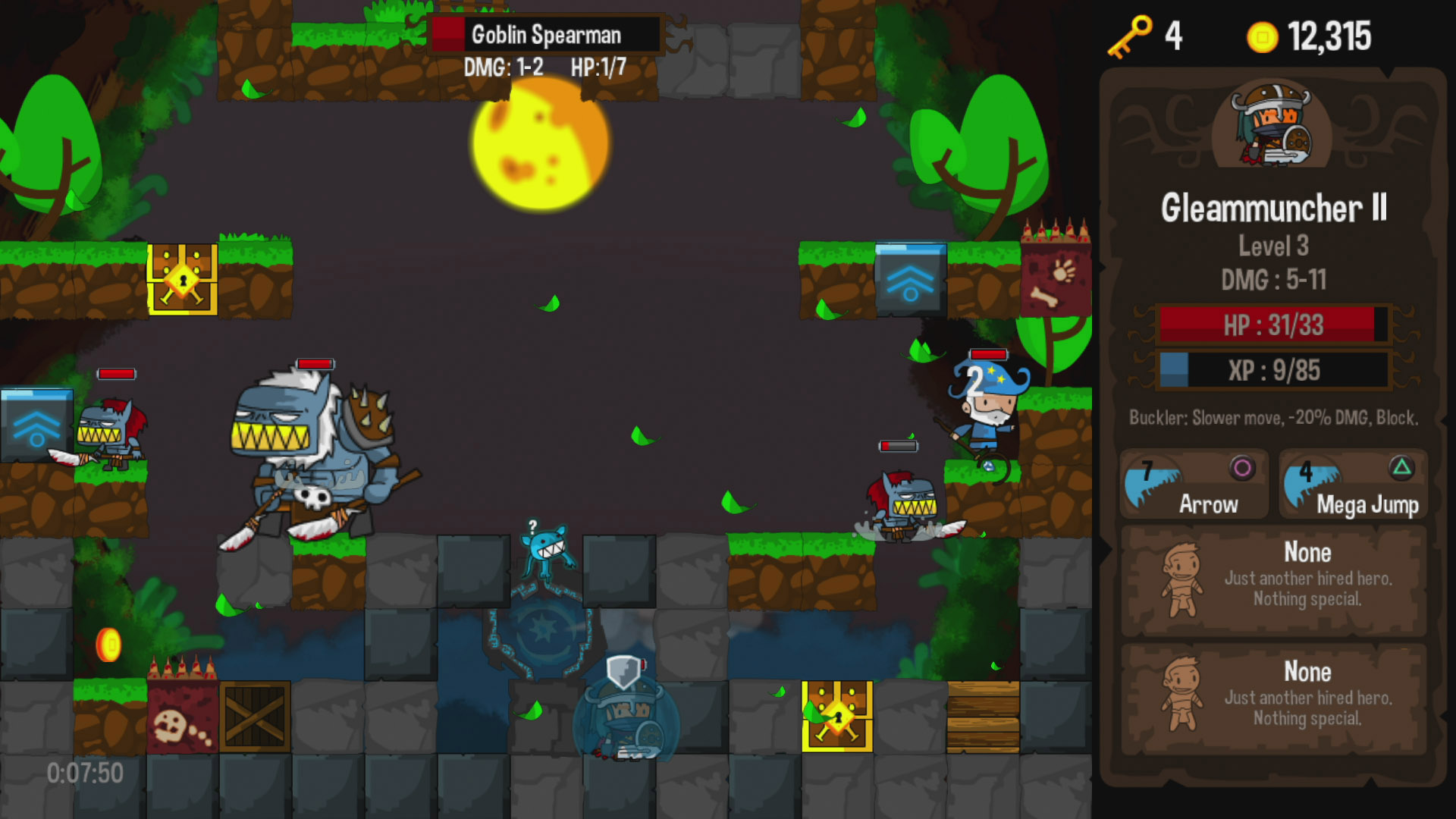 The starting level allows you to interact with a number of characters to find out how to use some of your weapons and abilities and to gain a few power ups using some of your starting coins. Once you are ready to begin your adventure it’s time to activate the portal and hang on for some great adventuring…

The first level is a pleasant looking grassy green land that is unfortunately filled with some ‘orrible little goblins! If you prefer to concentrate on the surroundings and focus less on the hack ‘n’ slash aspect, the options allow you to set Auto Attack on so your hero automatically starts attacking enemies when within range. This is a nice feature, but invariably you’ll find yourself frantically mashing the attack button regardless as you become more engrossed with the game.

The graphics are great and the music composition is spot on adding some nice atmosphere to the game. When you are near enough to an NPC that you can interact with, a small icon appears. Both hero and monster health are displayed as health bars above the characters heads which makes it easy to see, although quite often I found that I kept battling on rather than fleeing as my health dropped. One minor gripe, the health bars are always red regardless of whether your hero is at full health or near death. A colour change from green to red would have been nice as the health level dropped. 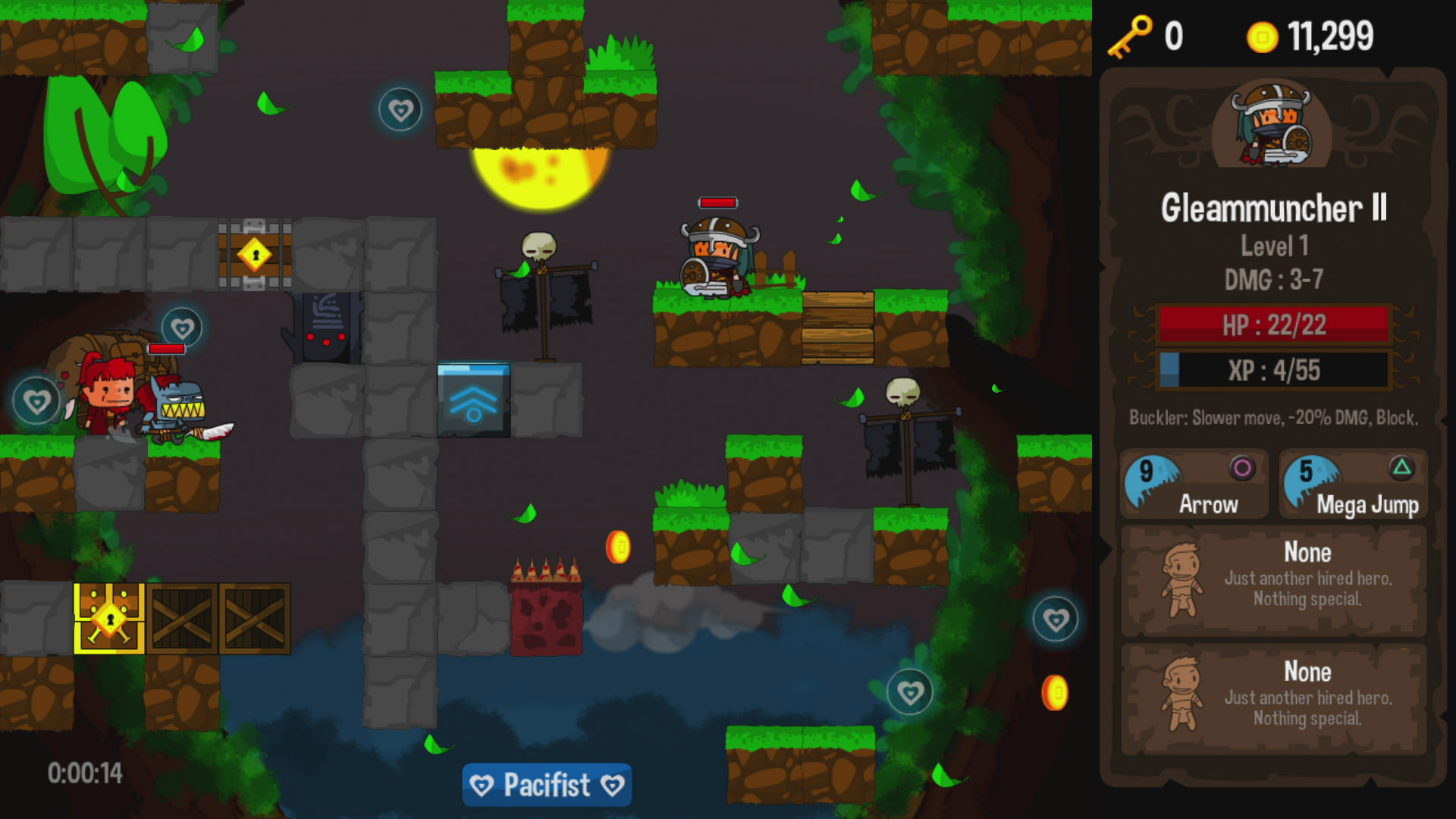 As you descend downwards in the game (it is called Vertical Drop Heroes after all!) you can collect keys to unlock cages to free prisoners or to unlock chests to find treasure. Freeing the prisoners can be a good option as they will help you battle the enemies, but then the chests contain many useful items such as potions that help improve your attacks or provide protection. Make sure you power up and gain as many bonuses as possible to help defeat the end of level boss.

Overall this is a really enjoyable game with some interesting features and great gameplay. Expect to die a lot as you work out the best way to reach the end, but remember as the levels are procedurally generated, no game is ever the same!