The Bard’s Tale has an incredible pedigree and is hailed as one of gaming’s true classics. The RPG series was first released in 1985 for a range of 8-bit systems and was one of the early dungeon crawlers. Set over a series of grid based maps, the player took control of a diverse party of characters in search of monsters, treasure and glory… and the odd quest or two…

I have a lot of fond memories of the series, dating right back to the Commodore 64 release. It was one of, if not the first disk based game I owned for the machine. And when I moved on to the Amiga it was the first RPG I bought for that as well. Both had many hours of my youth wasted on them.

Evolution Of The Bard’s Tale

The game didn’t stop there. It spawned endless sequels and then in 2004 branched out onto consoles with a more action oriented RPG… sort of. This suited the type of arcade gameplay console owners expected from their RPGs but it wasn’t quite a continuation of the original series. Developed by Brian Fargo, one of the original creators of the series, it was produced by his company inXile and as Electronic Arts still held the rights to The Bard’s Tale it wasn’t quite the game people were expecting it to be. 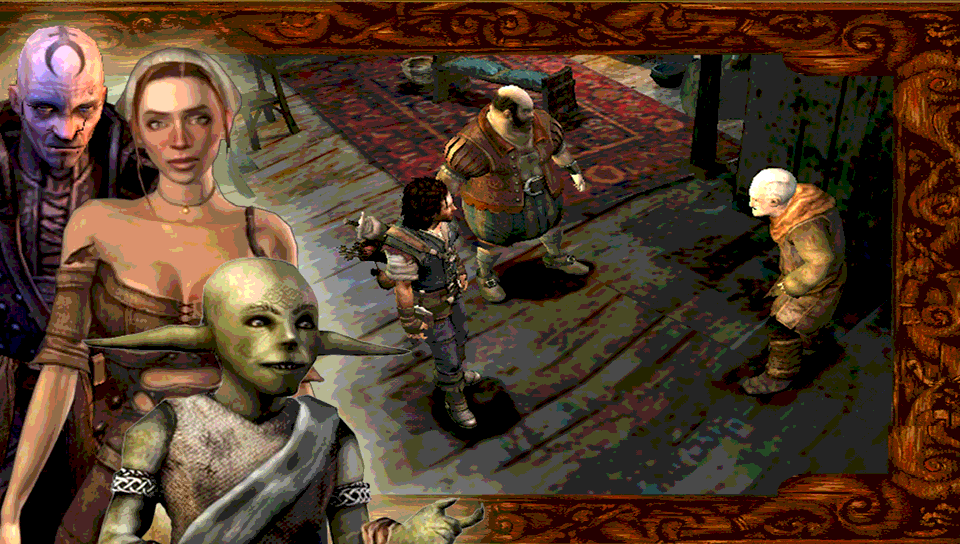 This game changed the familiar format of the game from what fans were used to. Instead of a party-based adventure, the game focused on a single character. Our hero was an adventurer, exploring the game world with somewhat questionable morals. Instead of fighting evil, he was more interested in women and money. Dropping the first person 3D view, it took a top-down perspective approach and changed the narrative style. Rather than being a serious RPG, it was a parody on the genre, mocking games that had come before it. Released for the PS2, Xbox and PC it was met with mixed reviews despite having an impressive voice cast delivering the game’s unorthodox dialogue.

Moving foward over a decade and the game was given a facelift for modern platforms. Remastered with improved visuals, it was ported to a wide range of console and mobile platforms and eventually made its way over to the Vita. But did the port do the original justice, and was it a worthwhile game compared to the handheld’s already extensive RPG line-up?

The first thing you see when the game loads up is an opening animation. To be honest this doesn’t bode well for the game and it makes you wonder what you have let yourself in for. It’s a pre-rendered CGI sequence but unfortunately it’s been transferred from the PS2 original. As with the God Of War Collection, the video quality is extremely poor and grainy. It hasn’t been scaled up so doesn’t use the full screen of the Vita and really makes you wonder what you’re letting yourself in for. I did wonder whether or not the developers still had the original video files used to create the 2004 game as surely this can’t have been the best resolution copy of the intro that existed? 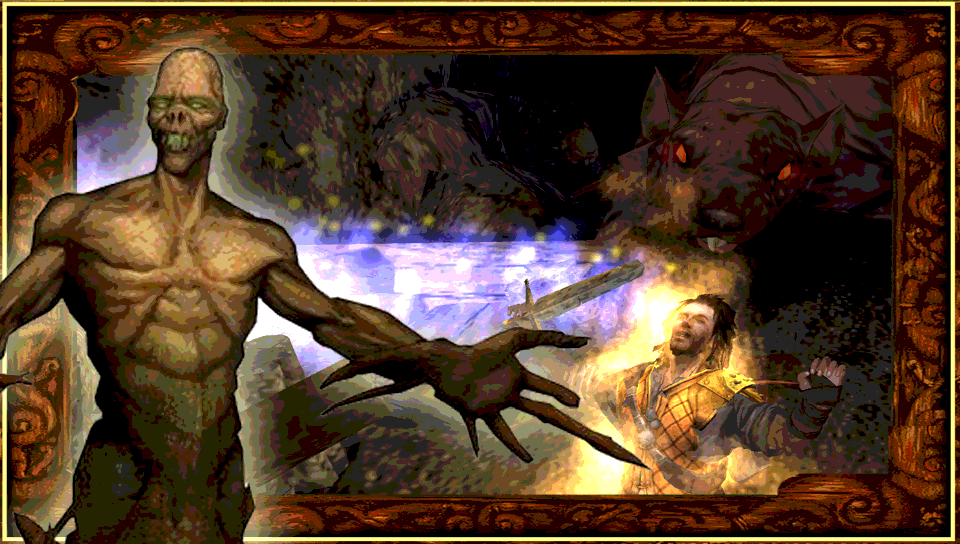 On to the game itself and our reluctant hero starts off, as you would expect, in a tavern. More interested in drink and the barmaid who runs the establishment, he is persuaded to tackle some rats lurking in the basement for her in return for a meal and a room for the night. Thinking that it’s going to be an easy task (and hoping for more than just the promised accommodation and refreshment after his success), he agrees to help. He soon regrets that decision, finding himself up against a giant rat so dangerous that it forces him to flee in terror. With some help from a stranger, he learns to defeat it on a second attempt and thus begins his adventure.

Moving through the game you encounter various NPCs who ask for your help doing jobs for various rewards but eventually you stumble upon a quest to save the land in a typically clichéd RPG trope. All throughout, the game is filled with real-time combat, various monsters, and what sets The Bard’s Tale apart – a more risqué and many might say sexist and at times low level sense of humour. And being honest, I found this approach to the game and the accompanying dialogue somewhat unsettling at times. It wasn’t needed to be able to tell a good story, even a parody of one.

Getting To Grips With The Bard’s Tale

As soon as you get into the game proper you’re hit with one of the game’s major problems. The abysmal controls. There was a lot to pack in – combat, movement, camera controls and the magic system when the hero plays any of the songs he has learned – but it’s console origins are obvious. Instead of developing a new control system adapted perfectly for the PS Vita, what is seen here are the controls from the PS2 version. And where the PS2 used both shoulder buttons, the L2 and R2 functions have been replaced with the use of the rear touch pad. This would have been fine if if weren’t for the fact that this opens up essential in-game menus and they can be triggered very easily.

There’s no in game tutorial explaining the use of the rear touchpad and at first I thought the game was bugged or worse there was an issue with my Vita until I did some more checking on the game. The problem arises depending on just how you hold the Vita during play… If your hand even slightly touches the rear of the console, some of the menus will open and close repeatedly during play making the game incredibly frustrating. It makes longer gaming sessions uncomfortable when you’re unable to position your hands anywhere near the back of the console. Your only option is to use a dedicated grip or play the game on the PlayStation TV instead. 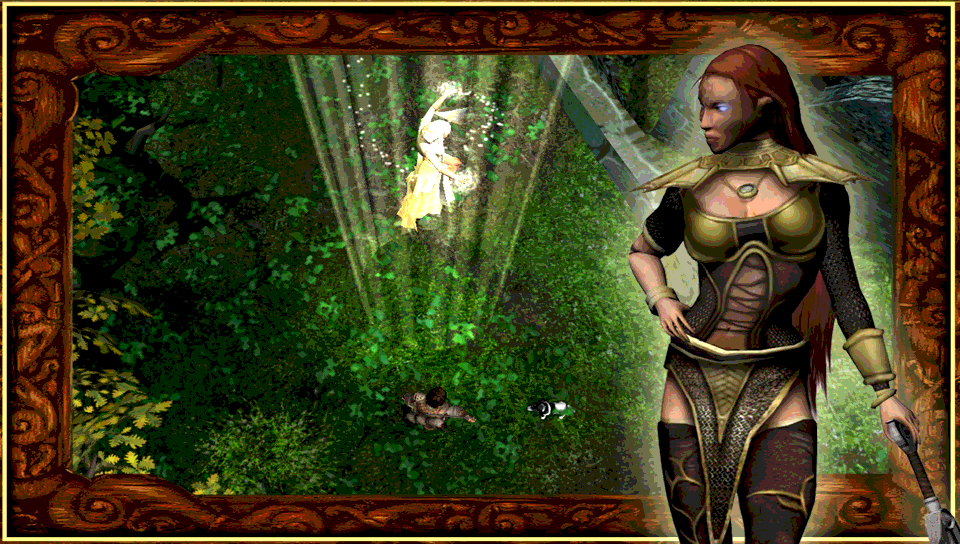 The Bard’s Tale series has been around for a long time. That’s not always a bad thing in gaming terms. Mario has endured for decades and is still as popular now as he has always been. But this entry into The Bard’s Tale series hasn’t aged particularly well. I don’t know how, but I missed it completely first time around. Playing it now and to be honest it still can’t get away from the fact that it feels like a PlayStation 2 game. And to be honest, not a particularly good one. Everything that made RPGs cumbersome to play on consoles in the PS2 era are here – awkward camera angles, fiddly controls, limited save points. Generally everything that would have put novices off from the genre completely.

Light At The End Of The Monster-Infested Tunnel

It’s not all bad with The Bard’s Tale though. Voice acting is superb, but that’s no surprise considering the impressive cast list. The graphics, while not up to modern standards we’ve seen from its peers on the Vita are definitely a step up from the original PS2 release and are considerably sharper and cleaner. Although I have to say here that it does have tough competition when we’ve had such gems as Final Fantasy X to look at on the remastered front. After that, nothing else comes close. And the music and sound generally impresses. In fact, the presentation overall doesn’t give me any reason to complain at all. It’s just the rest of the game that lets it down. 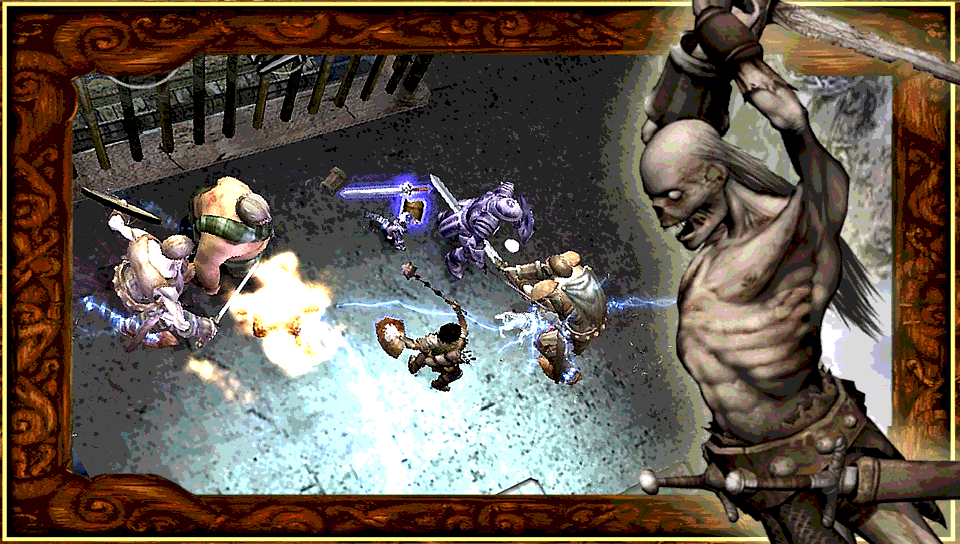 Now I really wanted to love The Bard’s Tale. I really did. But it just doesn’t feel or play like a modern PS Vita game. While the odd issue here and there could have been forgiven, here they have combined to bring the game down to a point where I genuinely struggled with it. What I don’t think helped was being such a big fan of the original series. That lead to genuine disappointment with the change in style of the game and it was too much of a departure from what I have known and loved for so long.

Not only was it a case of it not feeling like a part of the Bard’s Tale legacy, but really I just felt that the game was bland and didn’t offer anything that I hadn’t played or experienced countless times before that had been done much better elsewhere. I’m not saying that it’s a particularly bad game, but it’s not the best example of the genre and it’s one that you’ll really need to work at to get the most out of. It’s not too bad for the price, and there’s plenty of game in there, but you may find it a struggle sticking with it to the end.

A limited edition physical copy has been released and is available from Red Art Games who kindly provided the copy of the game for this review.