Steampunk games are few and far between on the PS Vita. In fact I’d be hard pressed to name more than half a dozen but Swedish developer Image & Form have made their name from releasing nothing but games focused around the steampunk genre. More accurately though, their games have a rather unique twist. Instead of focusing on what you would normally expect from the genre with a mechanical, alternatively-powered world, Image & Form have taken things further focusing their games around steam-powered robots… 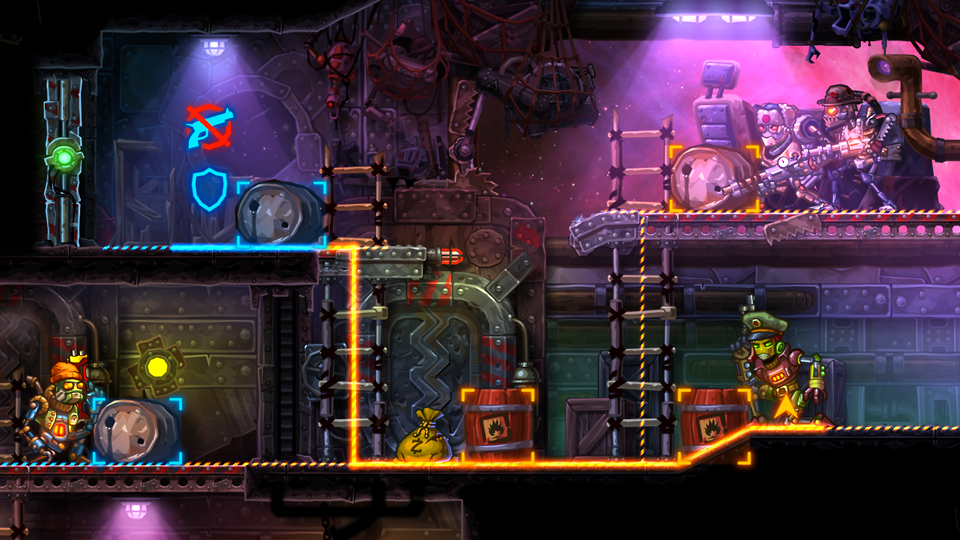 The Earth is doomed (isn’t it always). Well, actually this time things have gone a bit further than that and our wonderful but ailing planet has been destroyed. All that is left are a rag-tag handful of surviving robots scattered around the galaxy. With no planet to call home, most of these Cowbots try to survive on desolate planets eking out whatever living they can by mining for moisture – searching for the rarest commodity of all… water. This life would be bad enough if it weren’t for gangs hunting them down and trying to steal this precious water from them, power hungry factions, not to mention the turmoil going on in space… 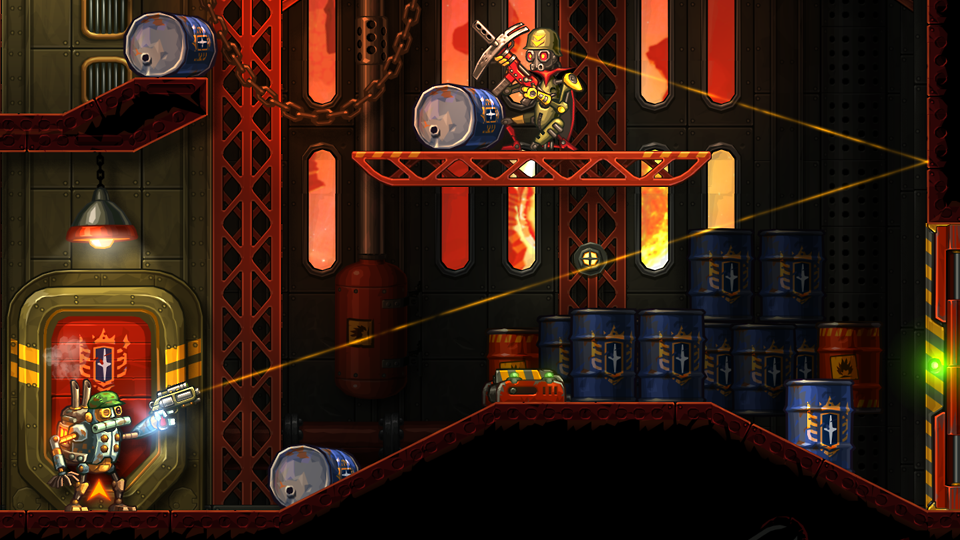 You’re one of these space-bound robots, Captain Piper Faraday, who is in command of a small salvage ship. You and your crew are only interested in one thing – exploring the (hopefully) empty ships in space, salvaging whatever drops of water you can find, and just surviving in the harsh emptiness of space. If only it were that easy. Most of the ships you try to explore aren’t as deserted as you’d like them to be so you have to fight your way through them for that vital cargo.

What ensues is the game itself. SteamWorld Heist can be best described as being a turn-based strategic squad-based shoot-em-up. Phew! The game starts off on your ship where you can talk to the rest of your crew or go to the Space Map where you can choose what location to fly to. This will display all of the accessible missions on a grid and upon completing a mission you can travel to any of the adjacent ones on the map. Once you have selected a mission you’re taken to the crew selection section. From here you can see more information on the mission, choose your crew, select the weapons / accessories they will take with them and then start the exploration at hand…

Turn based games can often be quite bland and rather clinical in their approach but what really makes SteamWorld Heist stand out from the crowd is its cast of characters. From your own crew to the random inhabitants of the galaxy that you meet to your evil adversaries, they’re all brought to (mechanical) life thanks to a great, witty script. Despite the game having no voice over and all of the characters speech being represented by nothing more than blips and beeps, you quickly warm to the charms of each and every one of them. When you take a small team into battle you really get drawn into each encounter and feel for your fallen crew, dreading each loss… no matter how temporary it may be (thanks to the wonders of your repair crew back on the ship who patch up even the most damaged of ‘bots).

I won’t delve into the story itself as I’ll let you discover that for yourselves, but as you progress through it you’ll face increasingly tougher challenges, meet new bots to recruit to your crew, encounter weary traveller bots who will be only too willing to offer you help and advice (sometimes for a few drops of water) and the odd boss or two… With regards to the game itself, each mission presents you with set objectives from the offset ranging from taking out a ship’s defenses to collecting as much treasure as you can before escaping safely. To ensure maximum replayability, each individual mission is set on board a procedurally generated ship so no two missions will ever play the same twice, even if you return to them at a later date. Once completed, any rewards an swag you collect along the way are assessed and you’re awarded experience points to each of the bots that tackled the mission (and survived). Earn enough experience an your bots level up and learn a new skill to help them along the way.

The combat itself is quite straightforward. Your squad takes it in turns to move around the current ship you are exploring. You have a fixed distance you can move each turn, reduced if you decide to take an additional action such as firing a weapon or using one of your accessories. Different weapons allow for multiple shots, have laser targeting, explosive ammunition and other effects so a key element in choosing your team from the start is to get a balance that will help you get through each level rather than automatically opting for the toughest, strongest bots you have at your disposal.

The swag you collect during each mission is an important part of the game. This can range from finding new and more powerful weapons, body armour, health packs, an most importantly of all… water. Water is the lifeblood of SteamWorld Heist and is used as a critical currency for everything in the game. If you want to buy new weapons and equipment from the shops you find at outposts you need water, Want to revive fallen comrades? Yup, you need water again so grab every drop you find regardless of your mission objectives. 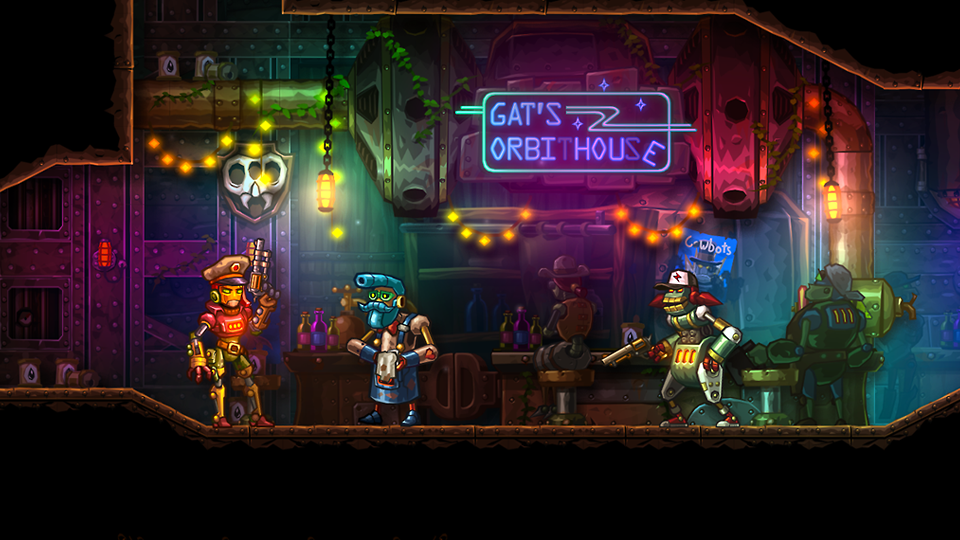 The first thing that really strikes you about SteamWorld Heist is the visuals. If you’ve played SteamWorld Dig then you’ll already be familiar with their steampunk artistic styling. The game is incredibly detailed, full of character, wonderfully animated and loaded with subtle touches and details that you won’t necessarily spot on first playing but you’ll appreciate the way that they bring the whole game world to life. No, it might not run at 60fps but the reality is that it doesn’t need to. It still looks superb and the visual effects are exceptional. Not just the pyrotechnics but the smaller details – smoke, lighting, particles… everything that really helps the game to feel real.

Sound is just as impressive. Despite none of the characters actually talking, each has its own unique personality that comes across extremely well, the sound effects are bold and brash with equal measure and the music is fabulous. Great background music but also some wonderfully camp western music playing in each of the bars that you visit adding even more to what is already an incredibly atmospheric game.

The only times I’d say the game felt lacking was really in the diversity in the core gameplay. For the most part levels consisted of a common theme – arrive at a ship, find the treasure, destroy a couple of targets, occasionally a boss and head to the exit. Even with the ever-advancing story, constantly changing foes and increasingly difficult challenges thrown at you, it did feel repetitive. Certainly I’d say the game works much better in shorter play sessions when the stage similarity isn’t that apparent, but when played continually for lengthy periods you’ll soon feel that you’re repeating the same stage ad infinitum even when you’re not.

That’s not to say I disliked the game. Far from it and I felt that it is vastly superior to SteamWorld Dig. However, as much as I loved playing it, I just don’t think that it’s a game designed for extended periods of play, but that’s what I think is great about the Vita. It has games that do work for longer sessions and others that work perfectly for the handheld market – games exactly like this that you can pick up, play for 30 minutes or so and then move onto the next. That type of approach to playing SteamWorld Heist suits the game perfectly and just leaves you wanting more.

While I really enjoyed playing the game’s predecessor SteamWorld Dig, this outshines it in almost every way. There’s more depth to the gameplay, the visuals are wonderfully atmospheric and despite the need to repeat earlier missions to strengthen your crew, it never became a chore and the levels were always fun to play. It’s not the most technically adept game for the PS Vita and some will no doubt complain that it’s not running at 60fps, but when a game is this much fun, who really cares. My only gripe, and this is what lowered the final score for me, is the fact that it’s not PlayStation TV compatible and I couldn’t see any reason why it couldn’t be. Apart from that it’s an essential purchase.