Game developers have it easy these days. Back in the 80s programmers had to make sure that their games, no matter what they were, had to fit into a limited amount of memory. It didn’t matter what type of game it was – arcade or adventure, strategy or role-playing game – in the early days gamers expected their games to load in one go. Even more so with 8-bit computers. After having to wait for what seemed like an eternity for a game to load from cassette, the last thing you wanted was for more lengthy loading times between levels and sections of the game.

What that meant was that developers had to focus on game design and making the most out of the resources they had on hand. Programmers had to find more creative ways of fitting level designs into smaller and smaller amounts of space and for location based arcade adventures, many were limited in the number of locations on offer but relied instead of the amount and variety of puzzles presented to the players. But what has this got to do with Quiet, Please!?

Well, this game harks back to that era and is a side-view arcade adventure. You take on the role of a somewhat irritated schoolgirl. On her way home from school, our heroine is finding herself increasingly annoyed by all of the noise around her. All she wants is some quite time to relax but no-one is letting her – all the kids around her on the school bus home are rowdy as ever and as soon as she gets home, things are worse. The family’s neighbour is making a row mowing his lawn while his dog barks away, your father is sitting around with the TV blaring away, your mom is spending hours on end on the phone and your kid brother… well, is doing what kid brothers do best. You just want to go to sleep and get some rest but the only way you can do this is if the rest of the house is quiet…

And so your quest begins. This is a classic old-school arcade adventure – you have to explore your house, discovering objects that you can make use of and using them to solve puzzles in order to silence everyone around the house… not literally I hasten to add! While the puzzles themselves are fairly taxing, they’re all logical so you won’t find them frustrating and you’ll get a generally positive sense of achievement each time you solve one of them. While there is no score for each puzzle you solve, that’s not the aim of the game – ultimately, you just want to reach the end of the game and get to sleep!

It’s easy to pick up and play and get into and developers Nostatic Softwarehave made this as easy as possible to play. You can either use the touch screen or d-pad / joystick combination to control the main character and it’s a simple case of walking left and right, pressing square to pick up and drop items and X to interact with them. If you use the touch screen, just touch where you want to walk and use the appropriate option on screen to pick up and use items.

I’m not too sure what the intention was behind the visuals with this game. While it certainly has a retro look and feel to it, I’m not quite sure what style they were aiming for. Don’t get me wrong, I love games that take this retro approach and it’s something that I do find appealing with indie games on the Vita and PS Mobile but this one has me stumped! The game is presented in a very simplistic, almost 8-bit look in terms of graphics and animation and at first you could be forgiven to thinking that it was designed to look like a particular format. However, even though there is a minimal amount of animation on all of the characters and backgrounds, they are more colourful than anything from the 8-bit era but at the same time being displayed in a much lower resolution.

To highlight this, I took one of the screens and scaled it down proportionally to that of a Commodore 64 screen which you can see inset in the screenshot below. 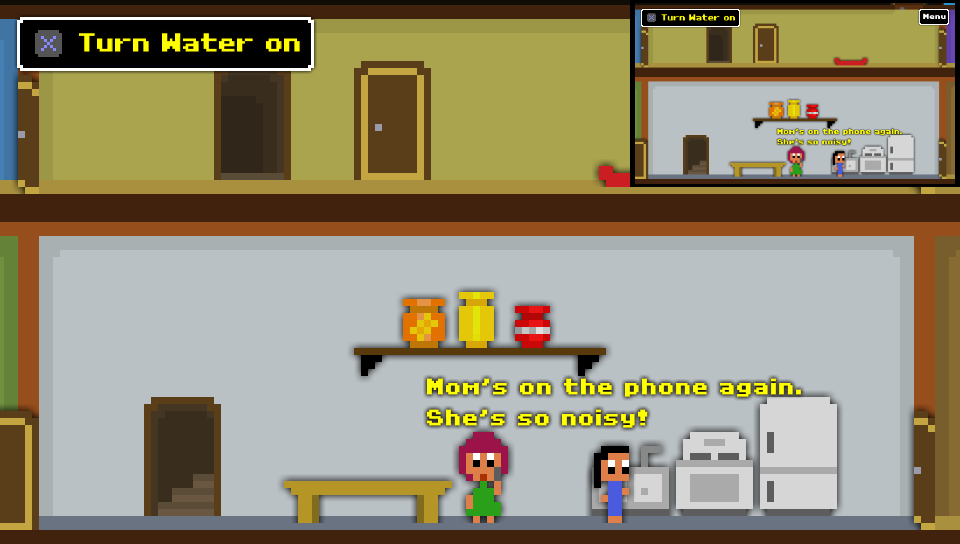 Even compared with “normal” Commodore 64 games, it appears chunky so it doesn’t quite fit. I certainly don’t mind the graphical style of the game and the look reminds me of one of my all-time favourite C64 games Little Computer People, but when there are games like Life Of Pixel and Rock Boshers DX recreating old formats complete with their colour schemes this seems a little odd.

I actually enjoyed playing this quite a lot and found some of the puzzles leaving me stumped for a while but they left me with the sense of “why didn’t I think of that sooner?” once the answers presented themselves, just like so many games like this back in the 80s. Being limited to carrying one item at a time means that you need to think as you walk around the house and plan out what you are doing. However, it’s far from perfect…

The house and exterior locations are quite limited and it’s not the largest of game areas to explore. While the file size itself is small (only 10Mb) I am sure that the game area could have been larger, even if it had meant a larger file size. I do appreciate that this is a port of an Android / iOS and XBLA game so the game would have had to be restricted on these systems, but being limited does make the game shorter than it could have been. And that brings me onto my second concern. Well, two concerns actually. First, there is no save game function. Initially this was something that bothered, especially as I had to cut short my first play through after about 15 minutes but then it became apparent why it wasn’t needed… as with most games like this from the 8-bit era, this can be completely easily in a single game session and I would say that most gamers won’t have any problems completing this in under an hour. Crucially, because of the nature of the game, it has virtually no replay value either. In fact I only played this through for a second time just to see how quickly it could be completed once I knew the solution and even watching the opening in full and not skipping through any on-screen text, nor rushing the game, I completed it the second time around in 10 minutes.

This really is a tough one for me when it comes to recommending it. As a game my initial thoughts are to say yes,but with lack of repeat play it does present me with strong reservations. If you love old-school adventures like this, then its still worth a go at the low price and if you do have a spare 79p in your PSN account then you could certainly do far worse. It’s a great fun game, but sadly the fun is rather short-lived but if you can overlook that then it’s potentially worth a look.