Card games have come along way when it comes to gaming at home and on the move. For year, the most we could expect to play was little more than Solitaire, the staple diet of Windows users for decades along with Minesweeper. When other games were released the choices were limited and offered very little in the way of realism or challenge as they were often single player affairs or the AI routines used to simulate other players were easy to beat. For those of you old enough to remember all of the strip poker games released back in the 8-bit and 16-bit era, it usually only took a couple of games to figure out the limited AI used behind each of the “players” so you could beat them and… well need I say more? 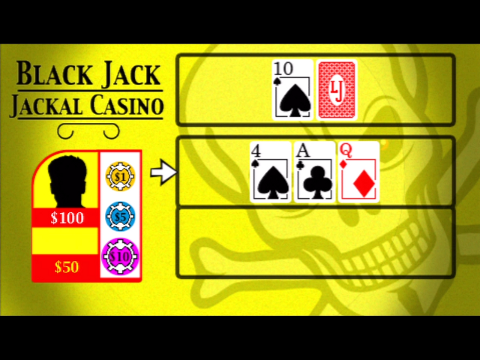 So onto Card Shark, the 2010 release as part of the Minis range from Midas Interactive, who were better known for their cut-price games for the PSOne and PS2, for the pocket money price of £1.69. Unlike many similar releases I’ve seen for the PSP in the Minis range, here you get not one but five card games that you’d expect to see in a typical physical or online casino such as InterCasino making this one of the best value compilations released in Sony’s budget range. Upon loading you’re first presented with the obligatory title screen the offered the chance to jump straight into playing the game or going to the Options screen.

The options themselves are quite limited, just giving you the chance to alter the level of both the music and sound effects individually so going into the game proper and the first thing you see is the option to select the theme for the casino. What Card Shark has are a variety of different styled casinos for use throughout the game although most of these are locked at the beginning of the game. To access these, they need to be purchased using any winnings that you’ve amassed. A nice starting touch to extend the longevity of the game. 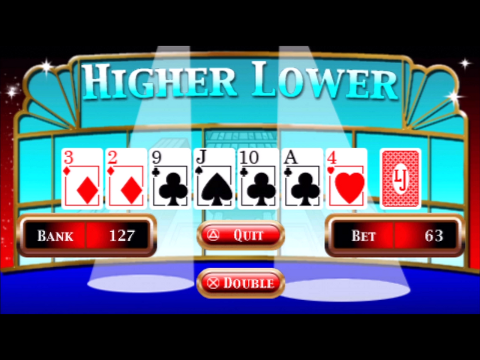 Once you’ve selected your preferred theme you have the five games to choose from: Blackjack, Five Card Draw, Higher Or Lower, Solitaire, or Texas Hold ‘Em. Controlling each is fairly intuitive with on-screen instructions throughout allowing you to adjust bets on-the-fly for each game. For each game you start off with an allocation of $100 in virtual cash and each game ends when that runs out, you beat the game or your AI opponent. Any winnings are added to a central pot which you can then use to unlock the extra casinos I mentioned earlier although in reality the extra casinos are merely different backdrops for the games.

Presentation for each of the games is relatively basic although there isn’t a great deal that you can do with a deck of cards to be honest although a recreated casino table and dealer would have improved this no end, as would have virtual opponents in Texas Hold ‘Em. I know that’s just nit-picking but it doesn’t feel as if you’re challenging anyone – virtual or otherwise – when all you see are a few words saying Player 2, Player 3, Player 4 on screen – it feels rather clinical and impersonal. As for the gameplay itself, while several of the games seem to play reasonably well, I did have some issues with the aforementioned Texas Hold ‘Em… 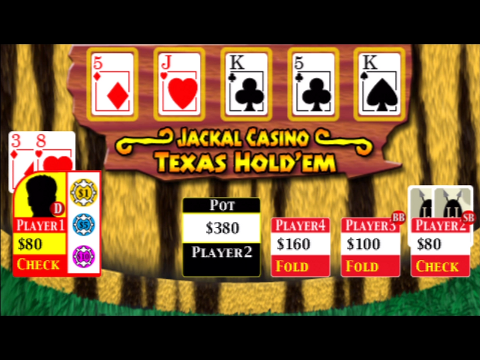 The rules of the game have been changed slightly to fit this handheld format and the game suffers for it. Betting limits have been fixed for each turn and there’s no option for players – human or AI – to go “all in” at any point. That may not seem like a major point for some, but it’s a powerful bluff tactic and while it doesn’t always work it seems to be a glaring omission here. Also, limiting the opening pot available to each player to $100 while having early bets starting at between $5 and $20 can make for a rather short game. I did notice one or two issues as well where the game didn’t seem to recognise winning hands properly. I had won a few games, winning the full pot from all three AI players, only to see a message on screen saying that I hadn’t won anything and being returned to the opening screen empty handed losing everything. Maybe the developers should have brushed up on the rules before releasing the game?

Overall while this isn’t a particularly bad game, it could have been a lot better. This is certainly one of those cases where the saying “you get what you pay for” applies. Midas have been known for offering low budget games and it’s clear here that corners have been cut to deliver this game at a sub-£2 price point. A reasonable diversion for a little while but there are much better Minis out there to spend your money on. 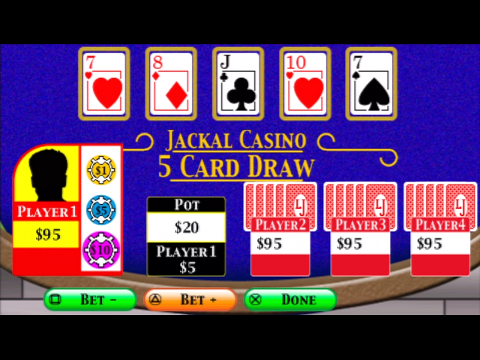